So this morning, Pew published an article on consumer interest in “green burial” and the lack of available spaces, and the state regulations that get in the way of such options.  And my first thought was, “hey, I wrote about that!” but then I couldn’t find the article, and ultimately figured out that it had been sitting in draft form for the past two years.  (I had orginally hoped to publish it elsewhere, but couldn’t find any takers, and then I must have wanted to go through and check links or verify that there weren’t any new articles I should include.)  But based on that Pew article, nothing much has really changed.

Bottom line:  we should all be able to be buried in a way that allows our corpses to decompose, naturally.  And here’s what I wrote two years ago:

Not long ago, the AP produced an article on the main cemetery in Jerusalem, which is undergoing a dramatic “remodeling”; in the same way as dense cities grow upward with skyscrapers, so too, they’re building the reverse, a multi-story underground cemetery, in which one takes an elevator to visit the gravesite of one’s departed relative.  This is not new, and “vertical cemeteries” already exist elsewhere — Brazil’s 32-story high Memorial Necropole Ecumenica is the tallest cemetery in the world — but what’s novel about the cemetery in Jerusalem is its tunnelling and mutiple underground levels.

The world over, people are coming up with innovative ways to bury the dead due to shortages of burial space.  In Japan, futuristic cemeteries store cremains in storage lockers, and descendants can visit by calling up the loved one via key card.  In Hong Kong, architects have proposed a “floating cemetery.”  In China, the government is promoting shared burial plots, smaller gravesites, and scattering ashes.

In Germany, grave plots are leased for periods of 15 – 25 years, at which point one’s family may choose to renew the lease or let it lapse; the expectation is that the body will have decomposed by this point, though, according to Der Spiegel, depending on soil conditions, it doesn’t always work out.  Cemeteries in the Netherlands function similarly, with leases of 10 – 20 years.  In France, burial plots can be reserved for as long as 99 years.  In Greece, after three years, that is, without allowing enough time for decomposition, bodies are exhumed and bones placed in a communal ossuary.

But speaking from my own experience with respect to Germany, this actually works out rather nicely.  In the United States, after all, for the most part, gravesites are simple markers, since the need to offer perpetual care results in the need to offer economical care, and since, for large numbers of burial plots, descendants are likewise long gone, or at least moved away.  In Germany, each individual gravesite — which might be a site for a husband and wife, or multiple generations — has its own flower bed, marked by a border, and it’s up to the family to care for the grave, by planting and watering flowers.  (In some cases, this tradition is slipping and the flower bed is replaced by a decorative rock covering and a flower pot, or by perennial ground cover.)  As long as there’s someone to remember the departed loved one, the grave is tended and the lease is renewed.  As an alternative to embalming, bodies are kept “presentable” if a funeral is delayed, by being cooled in the meantime, given that our technology has, after all, advanced from the Civil War era.

But this practice doesn’t work for all German residents; specifically, Turkish migrants to Germany, and even second and third generation ethnic Turks, are sending their deceaseds’ bodies back to Turkey to be buried, because

the German practice of limiting the duration of burial sites clashes with the Muslim tradition that the dead must be allowed eternal peace. In Berlin, the leases on graves span 20 years, after which they have to be renewed. Otherwise the site is cleared for reuse.

As a result, we have literal abandoned cemeteries, as well as near-abandoned cemeteries.  For example, the Jewish cemetery which was the site of vandalism in Philadelphia in early 2017, was a closed cemetery, maintained by a neighboring active cemetery; the Jewish community itself had long since moved away from that neighborhood, and vandalism or, more generally, damage, was apparent long before the February vandalism was reported.

Why are our practices so different than the continental Europeans?  In the U.K., to be sure, as reported by The Guardian, cemeteries are just now beginning to re-use graves, but up until the Burial Act of 1957, reusing graves was common, so that the early settlers should have had no cultural objection to grave re-use.  But presumably in our colonial past, burial space was such a non-issue that there was no need to even consider reuse, until it had become forgotten about and the very idea became shocking.

Could we now move to a grave-reuse system?  It would require a change in laws, which currently prohibit any disturbance of graves, except in the case of an heir adding another family member to the site.  It would require a change in burial practices — the practice of embalming, and the consequent requirement of a concrete vault to protect the soil from the embalming chemicals, would have to be done away with, and practices more similar to a Jewish burial (no embalming, exposure of the casket to the ground, with no concrete vault, but, at most, a liner above the casket to keep the soil level) would need to be commonplace.

And, what’s more difficult, it would require a cultural change.  Regardless of the reason for our custom of perpetual gravesites, it’s now imbued with meaning:  individual gravesites, one per person, in perpetuity, speak to the importance of each individual.  The perpetually-preserved gravesite has become a moral issue, and Americans view it as morally offensive to do otherwise.  And our burial practices seek to mask and delay, however possible, the ultimate decay of the body, and imagine that, with concrete vaults, we are “protecting” the body.

The perpetuity of existing graves means increasing numbers of Americans, to save costs, and because they too find standard burial methods undesirable, elect cremation instead.  But here, too, if they elect a columbarium, the cemetery/columbarium site still promises “perpetual care.” In contrast, in Germany, cremated remains are given the same respect in burial as traditionally-buried bodies, to the point where, until recently, cemetery burial was the only legal disposal option, but at the same time, they follow the same “lease” practices. In fact, in the United States, our culture around burial has left funeral homes struggling to store unclaimed cremains, because there is no culturally-normative practice for the handling of these ashes.

One might say that so-called “green burials” are the closest in the United States to a German-style system:  no embalming and a burial process that intends to result in decomposition.  In some cases, such as The Meadow in Virginia, families can choose between perpetual and “successive” (50-year) sites.  In other such “natural” cemeteries, the gravesites are permanently protected with a conservation easement.  But “green burials,” few in number in any case, swing too far in the opposite direction for most Americans — there is no headstone to mark the grave, and, with the few numbers of such cemeteries and the “conservation” nature of the land, they are distant enough as to make visiting the gravesite impractical.

More years ago than I care to admit, my high school composition teacher used as an example of “thinking outside the box” for persuasive speech topic, a boy in a prior class who spoke about the coming shortage of grave sites.  Not long ago, Fortune reported on the increasing difficulty city-dwellers will have with finding burial space.

Many urban cemeteries in some of the biggest cities in the U.S. are experiencing a land shortage and face the prospect of running out of room for more bodies in the near future. . . .

According to the National Funeral Directors Association, cremation in the U.S. has reached an all-time high, with more than 50% of all funerals involving cremation as of 2016. The study projects that by 2035, nearly 80% of all burials will be cremations. . . .

“The day will come when it [will be] difficult to find space for someone to buy a burial plot,” [funeral home director Jack] Mitchell said. “For millennials, it’ll become a consideration more than now.”

And, much as it’s cool to find one’s great-grandmother’s tombstone and even have a bit of family history filled in (what happened to great-great-aunt Anne?  Oh, she died young), it would be a deeply unfortunate bit of generational inequity if, in order to preserve centuries-old tombstones, the coming generations lose the ability for any sort of (nearby) burial as cemeteries fill.

So someday I want a flower garden on my tomb, and I want my grandchildren to stop by occasionally and pay their respects.  But when they’ve passed on, too, or have moved away, and the only way I’m remembered is as a name on a family tree, then let the next generation take my spot. 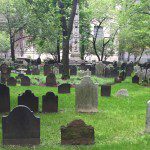 Catholic
What's so "final" about your "final resting place"?
Jane the Actuary 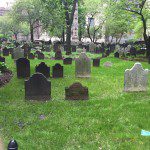 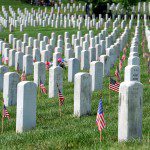