Danny Cortez is a Dangerous Man 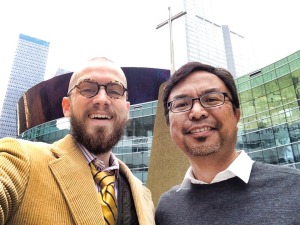 Darkness filled the sky and night was upon me. Throughout my drive to the airport, I thought about the death of my grandmother. I was hurting. The last thing I wanted to do was entertain a former Southern Baptist pastor from California. Though I invited Danny Cortez to speak to multiple groups in North Texas, I just wasn’t in it when I pulled up to the curb at the airport. Danny is an unassuming man small in stature and quick to smile. When he got in the car, I tried to strike up some small talk. Desperate to engage the greatest theological questions of our time, Danny wasn’t interested in small talk.

Our group was bigger than the venue and we had to find space with more room. Upon finding a suitable location, Danny Cortez started to tell his story. From the people that he sent to repairative therapy to the lesbian that has become one of his dearest friends to his gay son, we encountered the intensity with which Danny has wrestled with questions of orientation and gender. The conversion of Danny to a place of supporting full inclusion was a process. Though he knew it would cost him his job, Danny decided to tell his Southern Baptist congregation that he had changed his mind and now supported the celebration and participation of all people in the life of the church. Ultimately, Danny persuaded his church to keep him as their pastor and agree to disagree about issues of human sexuality and gender. The Southern Baptist Convention wasn’t having it and kicked them out not long after the decision. In the group, most of the people listening didn’t even think that such a church was possible. Danny repeated the same conclusion over and over again throughout the visit to every group and in every venue, “As Christians, we must believe that the process is just as important as the destination.”

From a home to a large progressive Baptist church to the largest LGBT church on the planet, Danny Cortez did not stop talking about love and embracing the other. Though I am much more radical and abrasive than Danny, his message caused a tremendous stirring in my soul. How do I treat those I disagree with? How do I love those who know nothing but hate? What would Jesus do in this age of polarities? The questions are not the most profound pieces of theology that I can muster, but I am more interested in following Jesus than profundity. I know that the follower of Christ must love well along the way. By choosing to believe that all people have value regardless of their beliefs and daring to seek to love them all, Danny is a dangerous man for all sides. Jesus was too.

December 12, 2014
My Message at the Funeral of Frances Hood...My Grandmother
Next Post

December 16, 2014 poetic words thought in the struggle
Browse Our Archives
get the latest from
Jeff Hood
Sign up for our newsletter
POPULAR AT PATHEOS Progressive Christian
1

Truth Sets Us Free, But Trump's Lies Killed...
Trump's lies have hastened the deaths of approximately 266,000 people SO FAR in...
view all Progressive Christian blogs
Copyright 2008-2020, Patheos. All rights reserved.