Don’t Stay at the Table Too Long 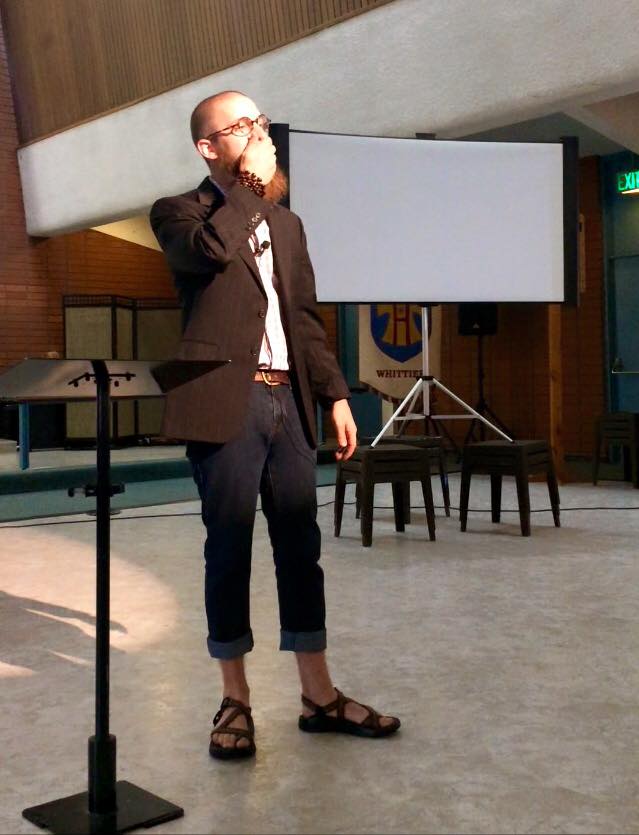 * Derived from a Sermon Delivered at New Heart Community Church in La Mirada, California on June 28, 2015

I am a child of the South. I grew up in a big Southern Baptist Church. Throughout my early years, I had a love/hate relationship with Jesus. I loved the Jesus that called for the little children. I hated the Jesus that was going to throw many people I loved into hell. Our church loved hell more than they did Jesus. I think our pastors thought that enough talk about hell would scare the hell out of everyone. These tactics had the opposite effect on me. The more we talked about hell…the more frightened I got. I couldn’t understand how the God of Hell could be the same as the God of Eden…who was all about collective being and love. Regardless of my doubts about the message, I still believed enough of what was being taught to be constantly scared. In the midst of constant talk of being left behind after the rapture or going to hell, I was desperate to find and accept the real Jesus. I was so desperate that I prayed for salvation hundreds if not thousands of times…but a Jesus that actually loved me seemed like a distant figment of my imagination.

In high school, I decided that scripture was going to be the answer to all of my doubts. Evangelicals tell people all the time to just go to scripture…all the answers are found in scripture. Do you know if people were dumb enough to follow that advice…they would go crazy? We all know that scripture is full of some of the weirdest commandments that you could ever imagine…especially in Leviticus. Nevertheless, I took the advice “all the answers are to be found in scripture” quite literally. I started reading and reading and reading and reading…I knew that all the answers to all of my questions would be found in the Bible. There was even a pastor I followed who would hold up a Bible and say, “The Bible is the way, the Bible is the truth and the Bible is the life…no one comes to the Father apart from what is revealed in this Bible.” I wanted a strong relationship with Jesus so badly…but this book called the Bible always seemed to get in the way. This passage here or this passage there…someone’s interpretation here or someone’s interpretation there…this theology here or this theology there…ultimately, I couldn’t find the answers in the Bible.

When I got to college, I found the first theology that I had ever encountered that really did claim to have all the answers…Calvinism. When I became a Calvinist, I started to believe that God predetermined everything. Blessings and abundance became a sign of God’s favor. I was doing pretty good…so I decided that God must be on my side. When I looked around and saw marginalized and oppressed people, I was certain that God was not on their side. Suffering was a sign of God’s disfavor. Theologies centered on the blessings of God can take us to some really warped places. For the first 22 years of my life, I made the major theological mistakes of placing all of my trust in the book and then in the blessing.

Evangelicals love to talk about being born again and getting saved. Well, let me tell you where these things most fully happened to me. I was about a year or so into my theological education when I got a phone call from Georgia. My dear mentor and Southern Baptist pastor was dying of lung cancer. I raced to visit him. When I arrived at his house, I was greeted by his wife and family and went into his bedroom. The hospital bed was daunting. I grabbed his extended cold wet hand and he said, “I’m gay and I always have been.” Here was a man who represented the incarnation of Jesus for me and all of a sudden I had to deal with the fact that Jesus was now gay. My life was changed forever. Slowly over the next few years, I realized that Jesus was and is most fully found in those that we marginalize and oppress. I could not lean on the Bible, the blessings or the knowledge for the answers…the incarnation of Jesus in the least of these was and is the only way.

There was a time when a group of religious leaders with an abundance of scriptural understanding, blessings and knowledge found a woman in the very act of committing adultery. These pastors threw the woman in the dirt at the feet of Jesus and demanded she be stoned. In this moment, we find the fullness of the Gospel in the actions of Jesus. Instead of inviting the pastors to sit down and talk things over…Jesus got down in the dirt with the woman. In this moment, the pastors have their stones raised in the air and are ready to kill. We too live in a time where people have their stones raised all over our country and are ready to kill. What does Jesus do? Instead of debating, Jesus gets down in the dirt and is ready to die with the woman. If the stones had started flying, we would have had an early execution. The path of Jesus is not about talking…it is about boldly placing your body into the fight against oppression and marginalization.

People continue to abuse and mistreat LGBTQ people all over our nation…don’t stay at the table too long.

Nine people were murdered while studying their Bibles in Charleston for no other reason than they were black…don’t stay at the table too long.

Five black churches have been burned to the ground over the last week…don’t stay at the table too long.

Sexism steals the dreams and lives of young women on a regular basis…don’t stay at the table too long.

Suffocating and stifling poverty is growing worse and worse…don’t stay at the table too long.

LGBTQ persons in Texas can be fired tomorrow for celebrating the marriage equality decision last Friday…don’t stay at the table too long.

Trans persons of color are being murdered throughout the nation…don’t stay at the table too long.

The police are killing anyone who dare cling to their rights…don’t stay at the table too long.

I could go on and on…but I guess that you get the point that our God is marching on…Jesus stands with those who are suffering while you are talking…don’t stay at the table too long.

Will you stand with Jesus or will you continue to talk about what that might look like?

When people are being abused, assaulted, marginalized, oppressed and killed…we need action not words…

Don’t stay at the table too long…

June 30, 2015 The Irrelevance of Denominations and the Relevance of the Church in the Ongoing Struggle for Marriage Equality in the South
Browse Our Archives
get the latest from
Jeff Hood
Sign up for our newsletter
POPULAR AT PATHEOS Progressive Christian
1

Transforming Communities Built on Exclusion (Part 1 of...
One possible interpretation of these stories is to understand them as drawing...
view all Progressive Christian blogs
Copyright 2008-2020, Patheos. All rights reserved.