The Indictment of Jesus in the Flames of Ferguson 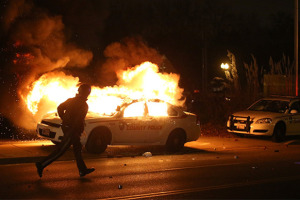 In the second chapter of the Gospel of John, Jesus walked into a space of tremendous injustice. In a space of great power, there were wealthy people taking advantage of the oppressed. Moved to both anger and action. Jesus fashioned a whip of chords and cleared out the evildoers. With great force, Jesus destroyed property. I am sure there were plenty of people who thought what Jesus was doing was too much. Unfortunately, those who passed judgment on Jesus had never stood for justice before and Jesus had to be the one to do something. We live in an age desperate for people who will do something.

I am a pacifist. I don’t believe in committing physical violence against anyone. I believe that Jesus was a pacifist. I believe that there is a difference between violence against property and people. In the second chapter of the Gospel of John, Jesus forcefully destroys the property of the oppressors. In the midst of such injustice in Ferguson, how would Jesus respond?

There will be Christians who condemn the protestors in Ferguson and surrounding areas. Whether you agree or disagree with their actions, the reality is that the folks in the streets are doing something when the rest of our society has done little to nothing. There will be those who don’t see Jesus in the midst of such destruction. I would encourage them to open their Bibles. In the second chapter of John, Jesus destroys the tools of the oppressor. I believe he is doing the same in Ferguson.

Prostrations: Empty Religiosity or Embodied Worship - Brad...
"Humble yourselves in the sight of the Lord, and He will lift...
view all Progressive Christian blogs
Copyright 2008-2020, Patheos. All rights reserved.