These are crazy times. Folk don’t know what to do…especially white folk. Within the white folk arena, there is one group that seems to have lost all sense they might ever have had on reality…white Christians. On the daily, I’ve been bombarded by bizarre statements/actions that white Christians are making/taking in the name of helping. These bombardments provide a textbook example of what things look like when helping hurts. I’ve tried to refrain from having this conversation. Initially, I dismissed white Christians as harmless…then…I started reading their theologically compromised bullshit.

“There are no white people in the Bible.  Take all the time you need with that.”

Just today, I saw/heard this quote at least a dozen times. Each time I encountered it, I thought about someone seeing it, thinking it was clever and excitedly sharing it. Of course, this is how dumbassticity spreads…and it is far more deadly than any virus.

“Americans believe in the reality of ‘race’ as a defined, indubitable feature of the natural world. Racism—the need to ascribe bone-deep features to people and then humiliate, reduce, and destroy them—inevitably follows from this inalterable condition. In this way, racism is rendered as the innocent daughter of Mother Nature, and one is left to deplore the Middle Passage or Trail of Tears the way one deplores an earthquake, a tornado, or any other phenomenon that can be cast as beyond the handiwork of men. But race is the child of racism, not the father.”

-Ta-Nehesi Coates, Between the World and Me (7)

White is not an indubitable feature of the natural world.

White is a modern construct.

White is a sickness.

White is a child of racism.

White continues to be and will forever be racist…because white was created to oppress.

“There are no white people in the Bible.  Take all the time you need with that.”

Though white people created many of the modern categories of race…they don’t get to put that construct into an ancient text as if the writers would have had any idea of such a construct. It is yet another manifestation of racism/unleashed modernism.

White Christians just don’t need any more encouragement to separate themselves from Biblical moral principles. They have been successful enough at that already. In fact, I believe we must always make sure that white people understand that the oppressors/marginalizers/haters in the scriptures are their kin folk no matter whether they are their skin folk or not.

So, I encourage people to be more concerned with how white people are acting rather than whether or not you can fit their modern construction of race into an ancient text.

Ok…I’ve taken all the time I need with this…

Stop putting this kind of ignorant bullshit out there. When you think something is clever…make sure it is theologically sound first.

Maybe instead of sharing a bunch of shit there is a need to embrace the heat…and get your ass out in the street.

Jesus will meet you there.

++ In terms of our modern understanding of race, there are also no black people in the Bible…although they do live out Biblical principles (especially of love/justice/forgiveness) much better than white folk do. 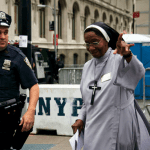 June 14, 2020 Defund the Police? Skepticism in a Time of Sloganeering.
Recent Comments
0 | Leave a Comment
Browse Our Archives
get the latest from
Jeff Hood
Sign up for our newsletter
POPULAR AT PATHEOS Progressive Christian
1