Modesty as the Language of Mutual Respect

“I just hate it when people tell me what to wear.”

That’s the open admission of a number of women joining in the backlash against the clothing police this summer.  Between my native hard-headedness and the reports of egregious abuses committed in the name of “modesty”, I’m sympathetic.  As much as we try to patiently forebear and ignore when the control freaks circle, eventually one reaches a limit.  One more comment about the evils of elbows and I’m going to stuff that 3/4 sleeve cardigan down your throat.

In that vein, let me quickly affirm a few truths about modesty:

These things are true.  And these are the reasons that modesty, in all its forms, is about mutual respect.

There Is No Modesty in Heaven

Modesty is an accommodation to our fallen world.  It is an act of consideration. If there were not envy, greed, avarice, and pride, we would not need to worry about whether we are flaunting our wealth.  In Heaven, you don’t have to hide the jewels in your crown.  What you possess is yours, rightfully yours, and no one will be able to accuse you of showing off if our Lord decides to robe you in haute couture.  (I guess it’s all haute, up there.)

In Heaven, there will be no adultery.  You won’t have to worry that skipping off to a quiet cloud for a long, fascinating one-on-one conversation with that cute guy in the glorified stigmata is going to tempt one of you to break your vows.

Part of your eternal reward will be an absolute certainty that you have arrived at your highest calling.  If your neighbor in the next Heavenly mansion has some hot-shot solo in the Choir of Angels & Other Persons, you won’t secretly burn with jealousy and wish he’d just SHUT UP ALREADY as he goes on and on about that tricky piece they’re going to be performing at the next banquet.

You’ll be free of all that.  People won’t have to act with modesty around you.  You won’t need them to.

Here On Earth, We Show Respect for the Weaknesses of Others

Because humans are so varied in their strengths and weaknesses, what constitutes modest behavior varies from one situation to the next.  My mother-in-law might reasonably brag for half an hour about the accomplishments of her eldest granddaughter (my niece), and I’m all ears.  I love, love, love those stories.  Thrilled to be associated with such a neat person.  Always glad to hear more good.

My same mother-in-law will, in Christian charity and humane common sense, refrain from going on and on about her accomplished granddaughter in the company of the colleague who wishes desperately for grandchildren and never had any, or the young client whose best friend was killed in a terrible accident the weekend before graduation.  In a circle of fellow grandmothers, she’ll practice a moderate middle — sharing a few stories, and then letting others have their turn.

This is modesty.  A frank tell-all openness in some circles, a careful and generous erring on the side of consideration in a few unusual cases, and a middle ground — neither giving away too much nor too little — in most circumstances.

Modesty Always Relates to Another

You can commit many sins locked alone in your bathroom, but immodesty is not one of them.  Modesty is always with regard to another.

Because modesty is relational, the same action can have vastly different meaning depending on the audience.  A man might, among his colleagues, confess to his money troubles in all humility:  “I’m having the hardest time finding a good tax accountant who really knows how to handle estates in the $5-10 million range.  Any ideas?”  The exact same statement, disclosed to the parish men’s group in an honest attempt to relate to the fellow who just asked for prayers about his financial situation, will be perceived as the height of impertinence and callousness if his neighbor’s financial situation is one of desperate poverty.

We cannot, of course, know the secret struggles of every person we encounter.  My brother was on a camping trip with a group from his wife’s work (civil engineers – they play in the dirt and get paid for it), and a colleague announced she’d baked a cake to celebrate a special anniversary.  My brother is an Eagle Scout, always prepared: “Wonderful!  Hey, I’ve got a bottle of wine in the truck!”  Awkward silence.  It was the anniversary of her fifth year of sobriety.

In our encounters with others, we begin at a usually-reliable middle.  If we discover an unusual need for discretion, we scale back and tone down.  Not out of fearful shame, but out of simple courtesy.  We let the other, the one with the significant struggle, give us cues about how much or how little accommodation he needs.

Modesty is Not Slavery

Our respect for the weaknesses of others doesn’t require us to live in some prison of suppressed existence, with the passive-aggressive “victim” acting as warden and torturer-in-chief.

Mrs. Childless has been suffering from infertility for years.  We strike a balance in our conversation, neither refusing to ever mention Jennifer’s Children Whose Existence Must Not Be Acknowledged Lest It Cause Mrs. C Undue Pain, nor feeling that every time some slight inconvenience of motherhood attends, the first thing I should do is call Mrs. C and whine for half an hour.  Mrs. C doesn’t get to march into every cocktail party and loudly announce, “There Will Be No Photographs of New Babies Displayed, and Pregnant Mothers Must Stay in the Back Bedroom.”

To the contrary: As best she is able, Mrs. C will delight in her friends’ happiness, and rejoice in the beauty and life that each new baby brings to the world.  And we who have been so blest will, in turn, take heed when Mrs. C admits that sometimes it’s all a little too much, and there are a few small kindnesses we could show her during moments of weakness, when grief overwhelms.

Sexual Attraction is Not Lust

Somewhere in between perfect detachment and vile sin is the range of ordinary human weakness in which modesty operates.

If we were all perfectly detached from the goods of this world, we could with perfect equanimity rejoice when our friends feasted, with no regard for our own lack.  We could appreciate the kindness and beauty of others, with never a moment’s temptation towards impurity.  It would be Heaven.

Modesty is not the response to greed, envy, adultery and lust.  No amount of modesty can keep these sins from consuming the one who consents to them.

Modesty is, rather, the set of kindnesses we show others in recognition of their striving after virtue:

Does it mean you must dress in rags, conceal every sign of God’s blessing in your life, and cover every hint of masculine or feminine charm, lest some poor soul be led into depravity unwittingly?

Several years ago I had the pleasure of meeting up with a group of internet friends at a real-life retreat.  Because we had known each other for years, and because we had met on one of those moms’ forums where ladies share all kinds of prayer requests and personal struggles, I had the odd experience of meeting “on the outside” people I’d only previously known “on the inside”.

In addition to confirming that I’m horrible at remembering both names and faces, but that I rarely forget a good story, I had the surreal revelation of the difference between what we think we know and what is true. This one was recently widowed. That one had buried a stillborn son. This one was newly-engaged after a bitter divorce and painful annulment.  From the outside you could see none of these things.  You had to get to know the person.

Modesty is about subduing the externals that distract so that we can first know the internals that matter.   Mr. Rich isn’t “Wealthy, handsome, picture-perfect family.”  He’s a man with a story of love, loss, frustration and small triumphs.  Mrs. Successful isn’t “Hot shot corporate lawyer job, private jet, vacations in Monaco.” She’s a woman with friends she loves, a mother she dotes on, and a spiritual life she’s trying to nurture as best she can in a difficult environment.  Miss Ravishing isn’t “Perky breasts, great legs, cute butt.”  She’s a girl trying to figure out her vocation, get along with her stepfather, and pass AP Chemistry.

When we push the externals in front of others, we create a fence around ourselves.  We create a display that distracts people from seeing the real us.  It’s much easier to be “that flamboyant ballet dancer hung like a gorilla” than to be a man who dulls his loneliness and insecurity with long hours in the gym, and wishes he had just one good friend who could support and respect him.  It’s easier to be “The girl who gets straight A’s” than the girl who wishes people would quit putting her on a pedestal and start helping her with her eating disorder.

The paradox of modesty is that in deferring to the weaknesses of others, we show respect for ourselves. 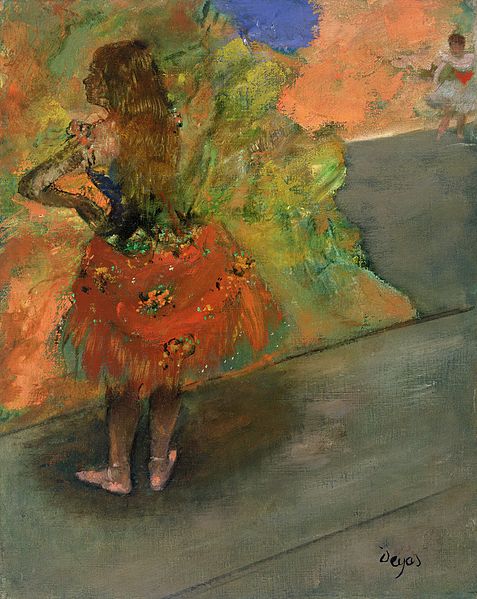