It’s the time of year when mothers start to get excited about school.  Before you actually start the work is the ideal to time to share school plans, because once you’re underway the enthusiasm can wear off a bit.  So here are my plans for the coming school year, starting with Mr. Boy.  I’ll cover the girls’ plans in two or three subsequent posts.

The boy starts 9th grade, which means the college-prep clock is ticking and the transcript is officially turned on.  We’ve been working up to this, gradually getting less relaxed and more rigorous over the past several years.  At the start of this summer I took a look at our plans for the new year, took a deep breath, and resigned myself to studying Greek literature.  We’ve been using Kolbe’s homeschool course plans for 60-80% of his school work since the boy was in 6th grade, and I’ve been very happy with them.  I knew we wanted to stick with Kolbe for high school, knew their curriculum was about right for our boy, but wow, what a lot of work for a certain highly-distractible mother.

Still, I resolved to do it.  Must. educate. child.

And then I found the third way.

Someone Else Could Teach My Kid

“So, um, darling, I know it’s expensive, but what if we enrolled the boy in online courses?”  Much to my relief, the spouse was open to the idea of investing in some sanity-saving delegation of responsibility.  Our choices for the boy were:

Once we stacked up the financial downside of Catholic school or hybrid school, and the time investment of getting the not-yet-driving child to some physical location, online classes came out as the obvious middle way.  The boy is very much at home online, and since he’s a good kid, he responds well to high expectations from the adults in his life.  (Of course his parents have not “high” but IMPOSSIBLE expectations, as we are frequently informed. Hence the interest in outsourcing a little of the teaching load.)

I’m risk-averse, however, so it was a tad nerve-wracking making the upfront investment.

It is as if the brilliant people at Kolbe Academy had installed a web cam in my brain.  They offered summer school classes, both of the fun type (Lord of the Rings something or another) and of the, “Oh my goodness is my kid ready for high school?!!” type.  We decided to try out the summer program as a trial-run to see whether this whole online-learning thing would work or not.  Having experienced the jolt that comes from changing school systems, I thought it best to pick classes that would prepare the boy for the new school’s expectations.  Thus we skipped the fun stuff and enrolled him for the summer term in Composition Boot Camp & Algebra 1 Readiness.

It went great.  He was vocally skeptical until about 24 hours into the first class session, and then he got serious about his work.  Quit making goofy complaints about the instructor, and got good about claiming the PC aggressively so he could get his work done.   (“It’s a middle-aged lady sitting at her computer,” he said the first day.   I chuckled and pointed out that regardless of where he attended school, he was getting exactly that.  Who do you think teaches high school students, son?  Super models?)

What I loved most about online classes: The class keeps meeting no matter what else happens in regular life.  We needed this.  I’m sold.

The One Weird Thing: Foreign Language

So that’s the plan for most of the boy’s education: He’s taking Theology 9, History 9, Literature 9, English 9, Algebra 1, and Biology 1 with the online classes.  The one thing he isn’t taking with Kolbe, though it was tempting,  is Latin.

Late spring a year ago, in anticipation of an upcoming used book sale, I asked the boy what he’d like to do for high school foreign language.  (I needed to know so I could start scouting out books in the language of his choice.)  The tricky bit is this: Whatever he picked, he had to stick with for three years of high school level work, because that’s what colleges tend to want.  We’d been studying Latin with modest but not amazing success, and I wasn’t convinced that he’d be enthusiastic about three more years of intensive Latin.  Still, it was on the table as a possibility, and I’d be game for learning with him.  The other choices I offered:

After a certain amount of discussion, he opted for simplicity.  French it would be.

Luckily for us, we have another family locally that has a French connection and three kids at about French 1 age.  I proposed we form a weekly class, and they took the bait.  So what we’ve got on the table is a once-a-week hourly class, and then an estimated four hours a week of homework outside of class.  One hour of that is “immersion practice” which for the core group of kids means “go talk to your relative who speaks this language and practice that way.”

If one kid’s learning French, that means all kids are learning French.  That’s how it works around here.  I did some hunting around, and picked Memoria Press’s First Start French as our house textbook.    For high school, I have to flesh out the program with a modest amount of additional vocabulary and a handful of grammatical constructions that are usually included in French 1.  Years ago I built a French 1 program from the ground up, so I know the drill.  I think this approach will be much simpler than trying to pick a high school text that’s suited to our unusual situation — neither a regular classroom nor a regular independent-study course.  Meanwhile, my middle school student can use it as-is, and the little guys will follow along with the curriculum from Memoria, but with assignments better suited to younger students.

So that’s high school.  Pretty simple.  The boy also has some fun hands-on mini-electives, all low key science-y stuff that his friend’s mom proposed.   Should be good.

August 4, 2014
How Much House Should a Bishop Inhabit?
Next Post

Abby Johnson and the Problem With...
Femina Ferox
Related posts from Sticking the Corners 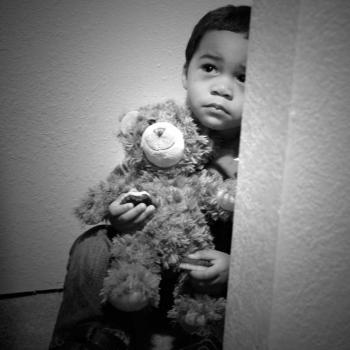