When I first heard about the murders at Mother Emanuel A.M.E. Church down in Charleston, the news was barely onto it.  So I went where the reporters were going, which is #CharlestonShooting on Twitter.  It’s a hashtag that’s been used before, for a different white-on-black shooting.  If you peruse the comments with any sense of interest in your fellow man, you’ll note the race theme real quick.  At this writing,  half a day later, all the evidence is pointing towards an unequivocally hate-inspired act of violent racism. The pastor (murdered) was also a state senator, so some kind of warped political statement might be twisted into it as well.  But plain old virulent racism is the shoe that fits.

What I’d like to talk about now is the state of that racism, and why these murders are leaving an awful lot of people shocked in a way that is, in the culture of the American South, a new thing.

Let’s talk about how things stood earlier this week, before the murders.

People talk about racism and “reverse racism,” but if you’re a white lady like me, what you get to see most is not incidents of probable racism against any particular person, but all those things white people say and do when they’re left unsupervised.  As a result, when you see some guy’s Twitter feed light up with comments along the lines of the white people still hate us / this is institutionalized / we’re not safe anywhere, you have to concede: This isn’t pure paranoia.

Meanwhile, over in the halls of the non-racist white people, which people also exist and are for real and have hearts of flesh just like everyone else, there’s a counter-reaction: I didn’t do anything / quit falsely accusing me / aren’t we supposed to ditch the stereotypes?

So then you wander back over to where the actual racists are, and you get the crude jokes and the sincere explanations about why it’s not racism, it’s just that those African Americans behave very badly, they’re stupid, and we’re not so sure about their cooking either.  Depending on the crowd, there may be an enlightened allowance for select individuals who meet spec — not those black people, but the other ones.

Meanwhile, at a fourth table, are the hopeless xenophobes, who don’t really care what race you are, they just wish all these pesky outsiders would go away, we had things how we liked it and the interlopers are making a mess.

It’s difficult for a non-racist white person to grasp that the recent past isn’t a firmly buried past.  History looks like this:

Before 1865: Slavery was bad, but what about the good things that happened?

For a non-racist white person, racism is difficult to even believe in.  It’s so preposterous a proposition — Really? You measure people by superficial, uncontrollable physical characteristics that have no bearing on their moral life or the good they bring to the world as unique and unrepeatable human beings? You do that?? — that it’s hard to believe socially-acceptable racism lasted as long as it did.

So it’s difficult for an nrwp to grasp a different view of history:

Before 1865: Slavery and murder of people like me wasn’t just acceptable, it was the law of the land.

1865-1965: So they outlawed slavery, which is good, but white people wanted people like me out of the way and doing their dirty work for slave wages, so the state turned a blind eye to the murder and terrorism needed to keep that happening when the laws on the books didn’t suffice.

Since 1965: Better does not mean ‘fixed’.  Did you happen to catch that piece on the KKK rally not twenty miles from here?

The first view of history takes this most recent murder and files it off as an extremist aberration.  The second perspective has the alarm bells sounding.

Southerners are violent people.  That’s a thing.  When my (white) great-grandfather was murdered by a (white) acquaintance in a mill village in rural SC in the early 20th century, the first thing the sheriff did was lock up the murderer and post armed guards.  It was the only way to ensure the killer would live to see a fair trial.  Everyone knew that if the police didn’t guard the guy, he’d be dead in a minute.

Southerners don’t ask, “Should we have guns?” Southerners ask, “Do all the right people have guns?  How come you didn’t bring your gun?  What are you, irresponsible?  Don’t you know the bad guys have guns??”

You can use this as an index to measure just how racist people are.  Here’s how it stands in 2015:

NRWP’s: Of course every law-abiding person needs guns.  Black people could be the victim of a crime same as anyone else.

Mildly bigoted white person: Of course every law-abiding person needs guns.  Black people could be the victim of a crime same as anyone else.

White supremacists: Um, aren’t we trying to get rid of those people?  Or at least enslave them?

The index doesn’t work in other places.  In other regions of the country, people don’t trust anyone with a gun, or only trust law enforcement officials.  But here, there’s a healthy skepticism about the usefulness of law enforcement, and a general confidence in one’s own ability to safely handle a weapon.  If you listen in the right circles, you’ll find people analyzing the AME murders and trying to decide whether things would have gone better if only the pastor had armed his congregation (as state law leaves it to him to decide), or better-armed them, or employed whatever improvement in tactics might possibly have helped.

That’s just how people think here.  You can think that way or not, but that’s the culture.

Because we are violent people, we are shocked by these kinds of killings.  Southern culture believes in deterrence.  We aren’t surprised that people get shot by strangers in other parts of the country, but around here it’s usually just your friends and relatives who kill you, and hopefully you can avoid them getting a jump on you.  Stranger-murder is counter-cultural.  That’s one side of it.

But there’s something else, and something more profound going on today: People in South Carolina are shocked by the AME murders because white supremacy is so marginalized in 2015 that many people have a hard time believing it exists.

Racist white people who will look you straight in the face and explain how African-American culture is a blight on society are shocked.   It’s one thing to wish those other people would behave properly or go back to where they came from; it’s another thing altogether to wish a person dead.

There are two other ways these murders are shocking that deserve mention, one of which has nothing to do with race.

People are shocked because innocent people were just up and killed.  There’s a raw grief that has nothing to do with who, what, when, where, or why.  Plain old fashioned sorrow.  People are walking around feeling punched in the gut.  That’s not politeness behind the dozens and dozens of prayers and condolences being offered.  That’s the real thing.

If you don’t personally know the victims, you know some of their kin.

If you don’t personally know the murderer, you know some of his kin.

There are very few people in this state who aren’t facing a couple of decisions:

If I were an irresponsible journalist reporting on a hunch and not facts, I’d hazard that when Dylan Roof showed up at Emmanuel AME’s Bible study, the pastor may well have viewed him as the downtrodden kid in need of a helping hand and some mentoring.  I have no idea whether that’s the case in fact.  But it’s a narrative that would more accurately fit the wider economic and cultural reality than some of the others being thrown around.

White supremacist violence is fueled by exactly that economic and social reality.  Black people who are financially successful, socially accomplished, and politically powerful pose a direct threat to the superiority complex of the KKK.

The first group can be educated and embarrassed into getting over themselves.  The second group stares sullenly out at the camera even for a selfie.

Are things that bad in 2015?  Well, not as bad as in 1915 or 1815, that’s for sure.  The Charleston shootings didn’t come out of nowhere, but they also aren’t something that could have come out of anywhere.  I don’t think I exaggerate when I say that the overwhelming majority of South Carolina is utterly horrified by this atrocity — and you couldn’t have said that in every previous generation.

Meanwhile, we aren’t fully out of the woods.  Racism and her alter ego xenophobia are as endemic as original sin.   Racism Lite is like dysentry or cholera — it won’t necessarily empty your soul of all its life-giving substances, but maybe you don’t want to test that theory.  It’s infectious and it’s destructive.  On the one hand, it’s a gross misstatement to confound a murderous white supremacist with your average small-time racist blatherer.  But the offhand rhetoric of the mildly-biased does feed the appetite for bitterness of the violently aggrieved. 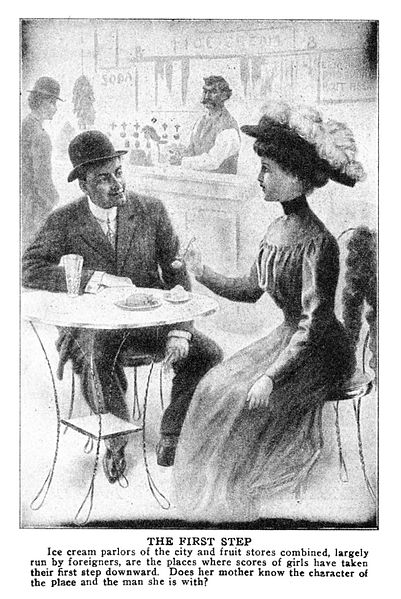 Image:By Artist unknown; book author Ernest A. Bell [Public domain], via Wikimedia Commons.  I went to Wikimedia and put in “Xenophobia” as my search term, and this cartoon was one of the results.  It’s an illustration of the point, not an endorsement.  Click through on the link for a few more details.

June 17, 2015
How You Get People to Behave at Mass: A Story About What Works and What Doesn't - updated
Next Post

June 19, 2015 The Terrible Problem with Laudato Si'
Browse Our Archives
Related posts from Sticking the Corners