I was raised on the kind of feminism that was about rejecting false stereotypes.  Your hobbies, your tastes, your talents — none of these are what defines you as “male” or “female.”  You can be a girl who likes sports (curiously, both my grandmothers played high school sports in the 1930’s — but that was Catholic schools, so it was different than normal, I guess) and woodworking and car repair, and that doesn’t make you less of a girl.

Boys were likewise accorded the complementary rights, though admittedly there was a little more hesitation in that regard.  A female engineer was just an “engineer” long before men got to shed the title “male nurse.”

This was the dogma I grew up with, and yes, people got carried away trying to pass on the dogma. In a desperate attempt to prove the point, girls were shunted into “boy” things just-because, and sometimes there was a scent of disappointment at girls who were perfectly happy with the traditional “girl” things.  It was an imperfect process, and often tainted by other terribly mistaken notions, but at its heart it was a good one.  I reached adulthood fully confident I could pursue whatever interests I liked, with no threat to my femininity perceived or feared.

I thus had to give serious thought to my reflection on the word “women” in the Word by Word Hail Mary, because I knew that so many of the typecasts assigned to femininity rang hollow.   There are indeed general, average, differences between men and women concerning size and strength and the distribution of this or that talent, but none of the exceptions to those “rules” are non-men or non-women.

Being a man or a woman simply is not about how well you stack up to a particular gender “ideal.”  It’s not even about how well your anatomical parts function — you can be infertile, impotent, or missing whole components of your genitalia altogether, and your femininity or masculinity is in no way compromised.  Devastating illness or injury can take away a part of your body you loved dearly, but it can’t take away the reality that you are a man or a woman.

These are facts.  This ideal I grew up with, however imperfectly transmitted, is a true ideal.

The current craze for gender-switching is a rejection of that ideal.  The reason is simple: It depends entirely on perpetuating the stereotypes we were supposedly trying to eliminate.

When a man claims to be a “woman,” the only way he can make that case is to don as many outer symbols of “womanhood” as he can.  Get himself some high heels and some fake breasts, slather on the lipstick, and try to convince people to buy the veneer.  The trouble is that pretty shoes and a nice figure and good make-up aren’t what make you a woman.  You can be utterly frumpy in every detail, and if you’re a woman, you’re still a woman.

When a woman claims to be a “man,” the only way she can float that claim is to try to downplay any outward sign of her femininity and adopt as many “masculine” habits as she can.   It creates a mockery of men — who are much more than flannel-clad testicle-bearers gathered around a football game.

Gender stereotypes are essential to the transgender effort because without them, you just have a regular person.  People might wonder on first acquaintance, if you have a sufficiently ambiguous outward appearance, whether you are a man or a woman. But, having established my credentials as a bona fide woman, it doesn’t matter how un-feminine I look, I still get to use the ladies’ room.

The OB-GYN will still drop a postcard in the mail reminding me to come in for the annual pap smear.  I don’t have to dress up special to persuade the nurse I’m not what I seem to be.  If people mistake me for a man because of my haircut and my work boots and my penchant for dockers, I even get the right to take offense: How dare you doubt my femininity just because I don’t look the way you think I should!

Pop culture is in a bind; we want our truth and our impossibilities too.  It’s no wonder Glamour magazine has chosen a man for its “woman” of the year.  The publication exists to sell the idea that your femininity isn’t a birthright at all, but something that can only be purchased by following the latest fads in the magazine.  When you’re in the stereotype business, your ideal spokesman is someone who wears nothing other than your product. 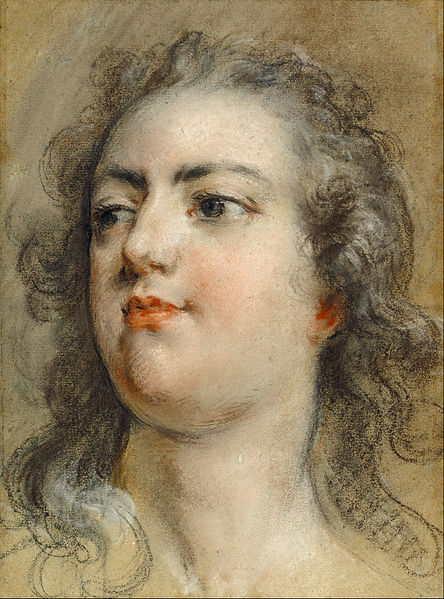 Whenever you’re feeling caught up in gender stereotypes, search Wikimedia on “King Louis.”

October 28, 2015
True Radiance Chapter 6: The Beauty in Every Vocation
Next Post

October 30, 2015 Interested in Exorcism? There's a book for that.
Browse Our Archives
get the latest from
Sticking the Corners
Sign up for our newsletter
POPULAR AT PATHEOS Catholic
1

Catholic
School Choice as a COVID Solution
Sticking the Corners

Catholic
More Stats from The Pillar
Sticking the Corners