Paris and the Battle for the World

In the wake of the attacks on the city of Paris, I was glued to the news.  As I followed commentators at France 24,where they were running live coverage all night in the immediate aftermath of the events, several comments in succession caught my attention.

The first was the observation that the style of the attacks — noted in the hours before any of the perpetrators had been identified — was typical of something out of Pakistan or Afghanistan.  This could, the analyst explained, be just as easily an attack at any of dozens of cities across the war-torn Islamosphere.  What is happening in Paris, I reflected, is only breaking news because it’s Paris.  We expect it in Iraq or Nigeria.  Where does the refugee run, if even Paris isn’t safe?

Later in the night there was a montage of video from previous times when the French government had declared a state of emergency.  The point was to give the viewer historical context on how rare it is that the government invokes its temporary emergency powers.  What became apparent to my eye, seeing clips from Algeria and from the more recent riots in the immigrant ghettos (“suburbs” – but they aren’t what Americans think of when we say that word) is that this is no new conflict.  It is only the latest in a long string of violent encounters between France and the Muslim world reaching back generations.

And of course, it was sadly ironic to hear the odd remark about how Paris had never seen such a thing before.  You could write an outline of world history just by listing all the deadly mass violence that’s gripped Paris over the millennia.

What happened in Paris Friday night is not so much news as it is the human condition; I will explain in a moment why this is the good-bad news.

We humans are made for peace.  We grab at it like the famished reach for food.  When we have it, we say to ourselves, this is normal.  This is how things should be.  And we are right about that.

We are destined, created, for eternal happiness.

But our happiness isn’t the careless, conscienceless happiness of the dog stretched out by the fire on a crisp autumn night — however pure and beautiful such pleasures are.  Ours has always, from the beginning of time, been a happiness won by sacrifice.

The Bible refers to Christ as the Lamb slain since the foundation of the world.  Not from the time of the fall.  Not from the time of His sacrifice on Calvary.  From the very beginning of creation.  We, made in the image and likeness of God, bear that sacrificial nature.  And hence, in the garden of perfect happiness, Satan shows up and challenges man to the sacrifice.

It is your dog’s nature, though he be stretched out lounging by the fire on a crisp night, if danger threatens to get up and defend to the death his pack.  To do so is just part of being a dog.  He lives out his complete dogginess when he does it.

It is your nature, free man that you are, to choose whether to enter that fight.  Instinct will, as it helps your dog, help you to choose the right way to proceed.  But it will be a choice.  A free choice, a choice you can choose to reject in a way that your dog your cannot.  Later, whether your dog stood his ground or fled, we will rightly decline to assign blame to his actions. We will recognize them as something that does not carry the moral weight of human action.

You, on the other hand, are held responsible.  You will look back at what happened, what you did, how you reacted, and you will assess yourself: Under the circumstances, did I in fact do the best that I could?

This is what it means to be a man.

Friday night as the tricolor was being raised over Facebook, several friends expressed their sense of helplessness: In face of what we think of as an attack on our territory, for many of us Americans have a certain patriotism towards France that has been long-earned, there was a profoundly felt desire to step in and join the fight.

And this is the very good news, because each of us is in this fight.  It’s not a new fight, and it’s not the battle of the West, either.  It is the battle of humanity.  We don’t get out of it until the end of the world, and I’m not strictly sure we get out of it then.    I think, rather, it will have gotten fully into us.

Because we are body and soul, smacked together so integrally that the temporary separation of the two causes death, it is both a physical and a spiritual fight.  Because humanity is not a collection of individual everything-men, but rather an interconnected community of persons each bringing their distinctive gifts to the world, the part we each play is not identical.

There are some of us in the fight who have the job of actually going round doing physical battle.  But there’s a twist to the sacrifice by the men and women who serve in the military, law enforcement, and other dangerous jobs that need to be done in order to keep the rest of us safe: Their job isn’t to protect us for a life of carefree coziness.  Their role is to protect their fellow countrymen so that we fellows can in turn ensure that this generation and the next are able to carry out both the spiritual and the physical battle.

Friday night just after the terrorist attacks had occurred Paris-time, I took my daughter to volleyball practice.  The rec center sits in the middle of what might have once been called the “wrong side of the tracks,” though it would be more accurate  these days to say the wrong side of the highway.  When no one has reserved the gym, the local boys jump ditches and climb over fences and walk along dark, narrow roads with no shoulder and no inkling of a thought about a sidewalk, to come play basketball with their friends.

So we show up at six, half an hour early, and the gym director comes out and says how he’s not sure whether there’s volleyball practice tonight. If he’d known we were coming, he’d have cleared the court, sent the kids home.  Well, I tell him, no sense kicking the boys out until the coach shows up.

They’re fun to watch.  Nice kids.  If you’ve never seen teenage boys playing pick-up basketball, you have missed out on something beautiful and noble.

Eventually the coach shows, and the gym director goes to tell the boys it’s time to go home.  Hold on, I say.  We’ve only got one team practicing tonight.  It’s an enormous gym.  We’re only using half the court.  Boys can keep playing on the other side.

The divide between the two types of teens who want use of that rec center isn’t particularly racial or religious or cultural.  But it’s socio-economic for sure.   It is easier to simply tell the local boys that they have to go now.

But in the battle we’re in, it is much more important that they know they belong, not just to their mothers and fathers and aunts and uncles, but to their city.  That what they bring to this world is valuable and good. That they are worth making room for.  They are needed and wanted both. 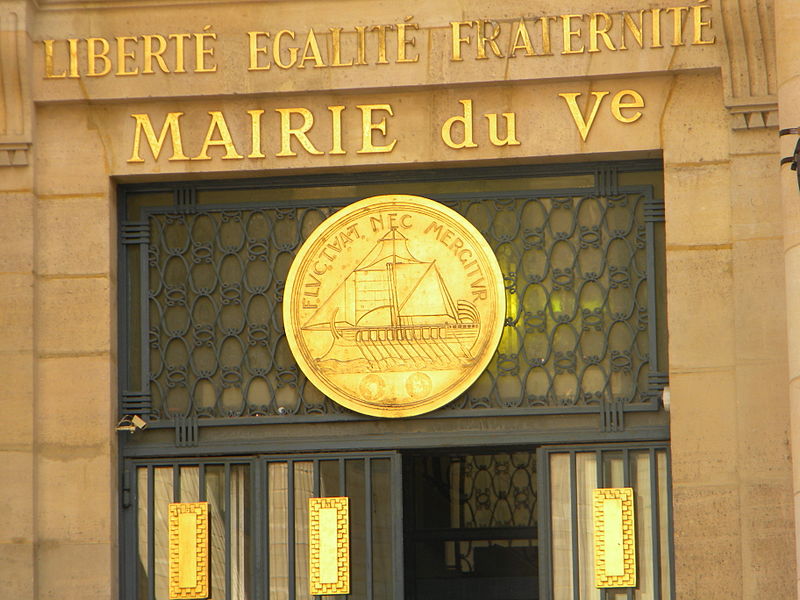 Fluctuat nec mergitur, motto of the city of Paris. By Britchi Mirela (Own work) [CC BY-SA 3.0], via Wikimedia Commons.  As seen on the 5th Arrondissement’s Mayorial Offices, by which I walked or rode my bike five or six days a week for a year.  Not the Sorbonne, thanks for asking; Sciences Po.