Lent in the School for Evangelization

We Catholics like our programs.  Love our programs.  So here’s this program we have starting this month, and the whole Church is enrolled.  It’s called “Lent” and it features prayer, fasting, and almsgiving.  That’s the theory, anyhow.

During Lent your parish is likely to take on some kind of other program as a sort of evangelization-thingie.  Small groups (I approve), or a parish mission (ditto), or some other worthy pursuit.  These things are good.  But what if your parish isn’t doing one of these programs, or you try it and nothing happens?

You need Lent 1.0.  The original Lent.  The prayer, fasting, and almsgiving edition.  Here’s Msgr. Gorski, veteran missionary, writing way back in 2002 on what propels missionary work.  It’s not the fish fry:

During my time here I’ve become more convinced that the secret of renewing a parish is to have a lot of people praying for the parish. When I’m preaching and doing appeal work for St. James or Zorritos my principal appeal is not for money, but for prayer. Without the prayer the money won’t accomplish much and with the prayer the money will be available.

. . . When you pray for a parish asking the Lord to renew, convert, redeem, heal, save, forgive, and transform a people you don’t have to twist his arm. You’re only asking him to do what he most wants to do. After all that’s why he shed his blood and died on the cross.

I’m grateful to the many people who are praying for us. I see the Lord responding by providing for the needs of the people in so many ways that I can’t.

For example, family catechetics is a major parish program. Mandated by our archbishop, the parish gives weekly training to small groups of parents for almost two years. During this time the parents are teaching what they learn to their own children preparing them for their first communion in which the parents usually received communion with their children. This means giving the Sacrament of Reconciliation to about a thousand children and parents spread out in about 20 towns and villages hours apart. This doesn’t include hundreds of reconciliations for confirmations, retreats, workshops etc.

As I’m the only priest in this huge parish I face this challenge, praying and hoping some help will arrive from somewhere. Last time I met a former St. James priest on vacation in Lima. He came up for a week and a half and we traveled all over the parish reconciling over a thousand people. He said it was the best part of his vacation.

This year visitors from the states told me of a fine priest from Nigeria working in the states. He wanted to improve his Spanish and help on the missions. He has given us a month of intense work and invaluable help reconciling hundreds and hundreds of people apart from Masses, counseling and other help. He leaves next week with the prayers of a grateful people.

Yesterday we went together to give the Sacrament of Reconciliation to the people of La Cruz. Nothing special was going on just an announcement of the sacrament in the parish bulletin.

We began together at 11 a.m., and he told me he would continue, as I had to leave at 12:45 p.m. for a luncheon meeting with the bishop. When I got back to the rectory in the late afternoon I discovered he’d been reconciling from 11 a.m. to 5 p.m. — six hours nonstop. People are praying for us and the Lord sends us prodigious workers.

You can read other installments by searching The Catholic Miscellany for “Gorski”.  Harrowing tales of every sort.  But the foundation in every case is prayer.  If you doubt Msgr. Gorksi, check out Becoming a Parish of Intentional Disciples, where you can confirm that yep, what works in Peru is the same method, the only method, that works in the good ol’ US of A.

And why shouldn’t that be the method?  What on earth do you think you’re doing evangelizing anyway?  Selling cookies?  You want to persuade people to hand over their whole lives to a deity you can’t be bothered to spend a little time with?  A deity you aren’t sure can really do much for you parish, compared to what your amazing plans will accomplish?

Every Lent, properly pursued, is a return to Evangelization 101.  Prayer, fasting, and then the rest becomes self-evident.  When you let Him, God writes big. 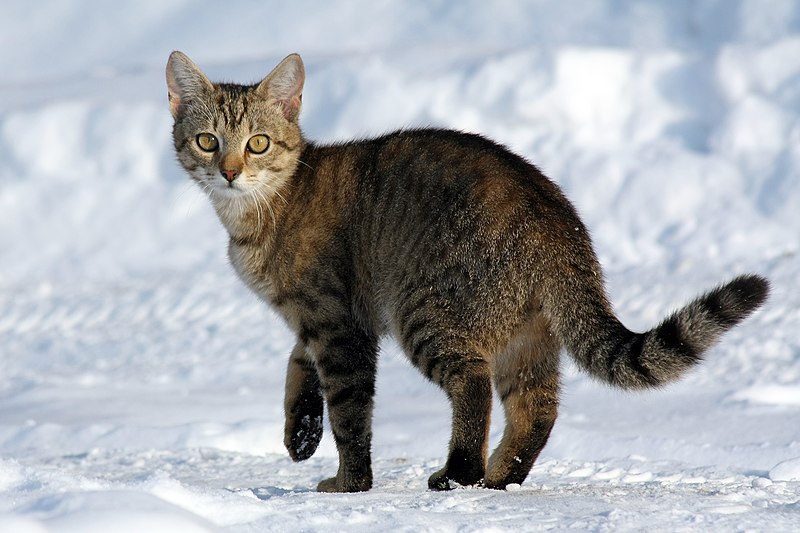 I like this cat photo.  I was going to search for a nice moody Dutch-mastery prayer-picture.  But I think a cat in the snow embodies today’s message as well as anything.  Photo by Von.grzanka (Own work) [CC BY-SA 3.0 or GFDL], via Wikimedia Commons

PS: If you want to talk small discipleship groups, yes, I’m a believer: