The Female Draft and the End of Abortion

I don’t expect that under the incoming administration there will be much momentum for requiring young women to register with the United States Selective Service, but sooner or later sufficient push will come along.  This is a different topic than “women in the military” in general, just as the decision to conscript young men is different than the question of the military having male volunteers.

When that day comes, the justification for abortion will have just ended.

What does it mean to volunteer or be drafted by the military?  It means that your body is not your own.  It means that you are now a person who sacrifices your freedom, safety, and perhaps even your very life, for the good of others.

This is what mothers do when they conceive and bring forth children: They put their bodies at the service of others.  To ensure the survival and well-being of her child, the mother sacrifices a measure of freedom and sets aside her own safety, sometimes even to the point of risking her life.

The argument for abortion is that no woman should have to make such a sacrifice (though often it’s her boyfriend or parents who are coercing the abortion because they don’t want to chip in their portion of sacrifice).  The courts have ruled, and proponents of abortion-rights insist, that even if you freely chose to engage in intercourse, you have a right to be spared any ensuing pregnancy.

Gentlemen, try saying, “My body, my choice,” to the US Government — whether you volunteered or were conscripted, either way.

I’m not arguing for the draft.  Nor am I saying that pregnancy is without its risks.  I am saying that pregnancy, motherhood, is the counterpart to the sacrifices men make to provide for and protect their children — even unto the point of risking their own lives.  Men and women who volunteer to put themselves in harm’s way in order to serve others — in whatever capacity — are undertaking a noble service.

When the US military starts conscripting women, it will no longer be “My body, my choice.” It will be, “Your body, our choice.”  Ironically, motherhood is never, ever, meant to be a forced condition.  What do we call men who force women to get pregnant against their will?  Rapists. 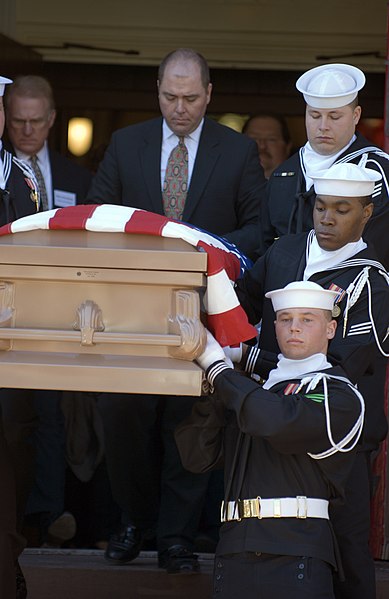 Photo by U.S. Navy photo by Mass Communication Specialist 1st Class Brien Aho [Public domain], via Wikimedia Commons: Navy Ceremonial Guard carries the casket of Charlotte Louise Berry Winters, the last known female veteran and former Navy Yeoman of World War I out from All Saint’s Episcopal Church in Frederick Maryland. She enlisted in the Navy in 1917 and died at the age of 109 on Tuesday, March 27th 2007.

Cornell, J’Accuse: What it’s like to be young, ambitious, and coerced by your dean into having an abortion.

If you are concerned about women’s (and men’s) health, the Washington Post has a long series of articles about the growing risk of death among middle-aged American adults.

France makes it illegal to show certain videos of happy children with Down Syndrome.

What if you’re infertile? A couple’s wavering decision to stick with Church teaching on IVF.

The real War Against Women being waged by ISIS.

The gift we mothers have in modern medicine.

The balance between respecting your body and worshipping it.

And over at my personal blog: Should you try to lose weight this year?

These links and many others can be found on my Twitter feed, @JenFitz_Reads.  Enjoy!

January 22, 2017 Why Trump Won, as Heard in Seven Shots & One Speech
Browse Our Archives
Related posts from Sticking the Corners

Catholic
Getting the Most Out of Your College Time...
Sticking the Corners
TRENDING AT PATHEOS Catholic