Is There Any Hope for People Like You and Joe Biden?

Here’s a curious thing about judging-not: In my heavily-Catholic corner of social media, there were one of two responses to reports that Fr. Robert Morey denied Joe Biden communion.  Half the crowd cheered, no surprise.  The other half invoked the need not to judge . . . and in the process tossed out all kinds of conjecture about the sorry state of Fr. Morey’s soul.

I considered getting hold of a few friends of Fr. Morey and finding out more about the particulars of the case, but I think for the good of the internet a larger question is more pertinent: Is it possible Fr. Morey did the right thing?

Setting aside any chance that (despite his good reputation among a few Catholics who know him) the man entirely bungled the whole affair and eats kittens for breakfast besides, could there still be some other priest who might deny Mr. Biden communion in exactly the right way?

Just How Bad is this Abortion Situation?

There was a time when Joe Biden waffled on abortion, but he’s over that now.  To hear it told, this is because hundreds of American women every day lie languishing on their death beds, their tormented physicians doing everything they can to save mother and baby, but alas the little one expired despite all efforts to save his precious life in the process of delivering mother from her mortal peril.  Outpatient, of course.

This is not the reality of abortion in America.  What’s real?

Were Mr. Biden keen to prevent these deaths, it would not be difficult to write legislation that outlawed the intentional killing of innocent children, but still protected physicians in cases where attempts to save the mother’s life resulted in unwanted harm (even death) to the baby.  Were he keen to help mothers in crisis pregnancies of any kind, he could campaign on a platform addressing the underlying issues that put parents in the position of feeling they have no choice but to abort.  That is not what he has done.  On the contrary: In his current presidential campaign, he has come out in favor of  more permission for abortion.

It becomes difficult to imagine how a priest could knowingly condone such a position.  But let’s look at the arguments in favor of turning a blind eye:

Yes he’s bad, but other people are just as bad.

This may be an argument in favor of withholding communion from more people, but nothing in it negates the reality that Mr. Biden wants to enshrine in federal law the right to kill innocent people.  Let us agree, then, that anyone who openly supports the killing of innocents should be denied the sacrament until they repent of that belief.

Pro Tip: If you are privately supporting the killing of innocents, now is the time cut that out.

True.  Has he done such a thing?  Perhaps Father is guilty of giving communion to pro-choice Republicans, and other scoundrels who just came from openly denouncing the faith at the doorstep of the church, while shamelessly denying the sacrament to those of the other party.  If so, let the bishop speak to Father about the need to deny communion to all who openly campaign for the killing of innocents, regardless of political affiliation.

Indeed.  Father never should have invited Biden to come campaign in Florence, SC, and requested the candidate present himself for communion in his parish.  Oh, wait, it’s Joe Biden who put Father in the position of having to figure out what to do.  We’ll agree that when Mr. Biden rolled into Mass, Father definitely should have taken the visitor aside and discussed the question of communion privately, so that Mr. Biden knew not to present himself for communion.

You don’t know the state of Joe Biden’s soul.

Lord willing, perhaps even now Mr. Biden is taking a time of silent reflection while he figures out how to explain to the world that he has changed his view and no longer supports the killing of innocents.  In that case, should Mr. Biden have been unjustly denied communion, having repented of his desire to enable the killing of innocents on a massive scale, and sought confession and absolution in the time between his last campaign speech and his arrival at Mass, then indeed Fr. Morey should have been among the first to welcome the penitent back into the fold.   It does not appear from Fr. Morey’s statement that Mr. Biden has apprised him of his change of heart.

Biden’s own bishop doesn’t have a problem with this.

I know!  I’m shocked, too.  Everywhere you go, people are talking about how holy and faithful the leaders of the Catholic Church have proven to be in every regard.  But of course the Church is a hospital for sinners, so I suppose this one time maybe a bishop has made the wrong decision?  Or perhaps a man earnestly seeking to do what was right came to a different conclusion than another man seeking to do what was right.

UPDATE: You know how I complain about bishops?  Frequently?  I am officially un-complaining about the bishops who put in place this policy. Which Fr. Morey was obeying.

Amen and alleluia.  Joe Biden belongs in the Catholic Church.  It would be far easier for him to seek comfort in the arms of sycophants, so thanks be to God he hasn’t entirely given up his faith.  If you’re a bad Catholic, don’t give up on yourself.  Keep dragging yourself to church.  When you sin miserably, repent, approach the throne of grace, ask forgiveness, and ask for God’s help in avoiding those temptations that weigh you down and wreck your life.

Maybe your nasty habits are private rather than public; maybe your sins run to something other than murder; maybe you have in mind some things you have done, or been, that you think are unforgivable; maybe you feel that you’ve run out of chances, and God has lost His patience with your constant falling back into ugly sin.  Nope.  God loves you and He wants you back.  Not just darkening the doors of the church, though that’s a start.  He wants you, and Joe Biden, all the way back into intimate union with Him.

Updated to add a link to Fr. Matthew Schneider’s post: 2 Priests & a Deacon Explain Why We Might Deny Communion 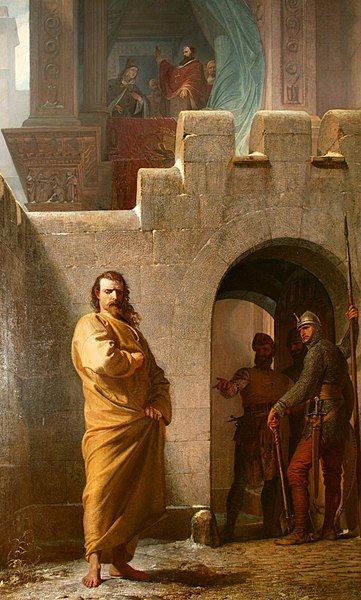 October 24, 2019
Trends in Parish Administration: Are Deacons the New Black?
Next Post

January 11, 2020 Request for Contributions: Effective Communication on Parish Access for You, a Person with a Disability
Browse Our Archives
Follow Us!

Catholic
The 2020 Elections, as Clarified by Lunch and...
Sticking the Corners

Catholic
Trends in Parish Administration: Are Deacons the New...
Sticking the Corners
TRENDING AT PATHEOS Catholic