The Innocence of St. Junípero Serra

As statues are being torn down or vandalized around the country, the Catholic Church is being asked to reckon with the legacy of St. Junipero Serra. So be it. The saint’s life is worth grappling with, and there’s plenty of room in his biography to make everyone squirm.

Some of the charges against the saint have to do with his own actions — which even a cursory look at his life would assure the reader that, for good or for ill, the man was not playing by the 21st century playbook.  Other charges are more guilt-by-association: Here stands a figurehead representative of the overall crimes of the colonial era and the abuses that have continued even into modern times.  In terms of deciding who needs to be memorialized where and how, these questions deserve attention.

But there is one criticism I have read that cannot be counted among of St. Junipero’s purported crimes: The desire to evangelize.

The charge is that the saint thought the religion of the indigenous people living in conquered territory was false and harmful, and he therefore sought to change their beliefs to his own faith, which he thought was true and beneficial.

[Full disclosure: I am not just the author of a book on evangelization, I am also myself a person who believes the Catholic faith is true and beneficial.  More disclosure: Other than those two facts, I have virtually nothing in common with the saint.  I definitely would have ridden the horse, for one thing.  Setting all that aside and continuing with our discussion . . .]

Let’s consider this one charge — not the most grievous, but it is being levied, and therefore deserves to be evaluated.  The saint is accused of:

This is not about his methods, which are a separate question. [I have a section of my book on proselytizing if you’re interested in what *I* think about the abuses of colonial missions, though I mostly step on modern toes, sorry, that’s my job.]  Rather, the charge that some critics are levying is that his mere desire to change the beliefs of others is itself a crime.

Yet even to levy the charge is to acquit the man on account of there be nothing guilt-worthy.

This supposed crime is the same thing as trying to convince someone of a scientific conclusion (guilty as charged), a course of prudent action (also guilty), or a moral position (very guilty).  If, for example, you’ve gone around trying to convince people that racism is wrong you are guilty of this same supposed-crime as the saint.

It’s not a crime.

There is nothing wrong, whatsoever, with making an honest effort, using moral means, to convince someone of a belief that is true and good.

In conclusion, even though I know very well it was promulgated by a bunch of privileged, prejudiced, chauvinist and mostly slave-owning, violence-committing lawbreakers, I remain a diehard fan of the Bill of Rights.  Those guys were wrong about a lot of things, and right about some things.  Ditto St. Junipero. Ditto you and me.

So stand up for what is true and good.  It is not just okay it is praise-worthy when you make an honest effort to persuade people of something you know in your heart to be true. 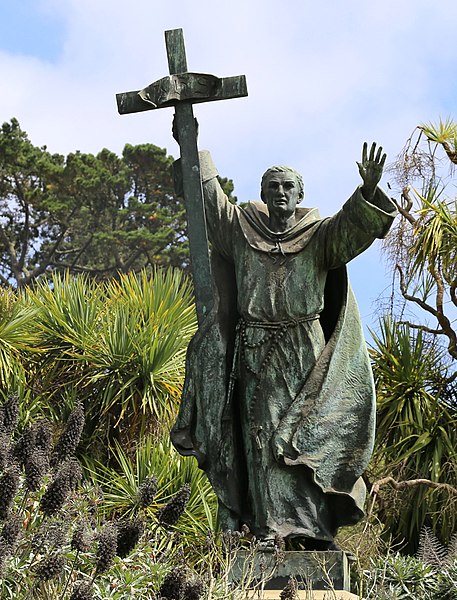 Photo: A statue of St. Junipero holding aloft a cross, photographed in San Francisco prior to its recent removal, courtesy of Wikimedia CC 4.0.

June 28, 2020 Spark Truth: The Life-Changing Magic of Reasoning Up
Browse Our Archives
Related posts from Sticking the Corners

Catholic
Getting the Most Out of Your College Time...
Sticking the Corners
TRENDING AT PATHEOS Catholic