The Institute for Family Studies is reporting that, after controlling for demographic variables, children from two-parent families where the mother works only part-time outside the home or not at all are most likely to attend a selective college. You can read the summary of the study here.

Small hitch, unless the author of the study, Nicholas Zill, is being coy about his methodology: He controlled for family income, not per-parent income.

The median family income among those families where both parents work full time was about $80,000. (See Appendix 1 at the bottom of the write-up for that data — lots of interesting numbers there beyond the topic of today’s rant)  Do the division in your head and that works out to $40,000 per full-time waging-earning parent.

For families where Dad works and Mom stays home, median family income was about $58,000.  Divide that by one this time, since it only takes one parent to earn the total family income instead of two.   The per-parent wage works out to about $18,000 more per full-time wage-earning parent.

I am not reading anywhere in the study where children’s college-entrance results were adjusted for individual parent’s average wages.  Unless the author of the study has failed to clearly explain what data he used and how he used it, it seems, per his own description of his methodology, that he adjusted for family income — the combined wages of both parents, regardless of how many parent-hours of work it took to earn that lump sum.

Admittedly he may have been forced to work with incomplete data.  All the same, this is a significant oversight.  There is a world of difference between two parents both working full time outside the home, in terms of parenting and lifestyle and ability to assist children, than a family living on a single, sufficient-to-support-the-family income, with the other parent able to devote 100% of his or her attention to caring for the home and family. (Indeed that’s the point of his conclusions.)

I rant about this because he’s by no means the first to fail to take into account the reality of per-parent wages.  Studies that look at “household income” or “family income” without examining how many hours of labor are required to earn that income are not studies that show any comprehension, whatsoever, of what it means to work.

It’s an interesting finding, but it’s also water-is-wet.  For a meaningful study of the value of women’s paid vs. unpaid labor, you have to actually study the impact of wage-earning decisions among women with the same earning potential.

So, with this data, we’d need to look at how families fare when one parent is earning that $40K and the other is staying home full-time, compared to both parents working, each earning (on average) $40K — thereby hitting that median total family income for two full-time wage-earning parents. That would be an accurate look at whether it is more beneficial, in terms of xyz measure of children’s long-term well-being, to double one’s income or forgo the second income in order to have a full-time at-home parent.

Pause here, of course, to note that “getting into a selective college” is not necessarily a measure of young-adult wellness, so we’d better check on that question as well.

Artwork: Here we have this nice piece by Nicolaas Verkolje helpfully entitled “Portrait of Balthasar Bekker” (public domain).  No mention of who or what the female in the painting is — his daughter? His muse? His librarian?  All three?

August 22, 2020
IVG and Poly-Parenting vs. Adoption and Step-Parenting
Next Post

August 27, 2020 Quit Feeding the Rhetoric of "Fear"
Browse Our Archives
get the latest from
Sticking the Corners
Sign up for our newsletter
POPULAR AT PATHEOS Catholic
1

Catholics Should Have Nothing to do...
On the Catholic Beat
Related posts from Sticking the Corners

Catholic
A Mission for Old Married People
Sticking the Corners

Catholic
The US has a Sexually Transmitted Infections National...
Sticking the Corners 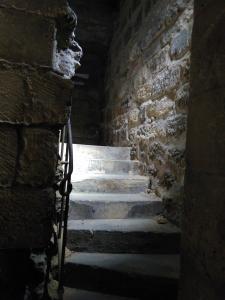