Maybe Not the Unity the Holy Father Wanted

One of my teens is determined to make a Taylor Swift fan out of me, and some time ago she introduced me to “Bad Blood”, lyrics here. I couldn’t deny the effectiveness of the artistry, but I was struggling to relate: The reality is that I just don’t have many bad relationships in my life, and even those few are merely tragic, not hateful.  I’m surrounded by pretty good people.  It’s nice.

I was listening to the song with my daughter, and knowing that Swift was capturing a real emotion, a real human experience, and I was searching my memory for someplace in my mostly-pleasant life when I’d encountered the kind of profound, life-changing, love-destroying betrayal that this song is about.

Oh yeah! I remembered in a flash of insight: The Catholic Church.

Can we say “McCarrick” for example?

After that, I considered turning this blog into nothing but pertinent links to The Pillar with the music video to illustrate the average sane-person’s feelings about the theme of the day.  Financial corruption, sexual abuse . . . I would have been able to hit a respectable posting quota, no problem.

And the thing is: I’m Catholic.  Very, very, very Catholic. I think everyone should be Catholic.  I think the Catholic faith is the best route to eternal happiness, period.  But dang can it get rough in here.  It’s not always little cutesy Catholic food fights, sometimes it’s frank spiritual warfare.

And I mean by that Spiritual Warfare Level: Your guts spilled and your head blown off.  The demonic is real, and there’s nothing the enemy hates more than the Presence of Jesus Christ.

So I want to share a reaction to Pope Francis’s attempt to quash the TLM from a Catholic guy who, in his own words, “Couldn’t care less about the Latin Mass.”  He’s not interested.  Never been.  No appeal.  If it evaporated into the ether, forgotten forever, he wouldn’t notice or care.

What he is, though, is a guy who believes the Catholic faith.  Not easily, who does?  And here I paraphrase his reaction to this news, which he shared with me extensively in an in-person conversation:

The Holy Father has made it clear he just can’t be bothered to deal with the real problems in the Church.  It’s an outright F-U to everyone who is incensed by the raping of children by clergy, the cover-ups of the bishops, and the brazenness of the US President in actively promoting the slaughter of innocent children while blithely promoting his “devout Catholic faith”.

This longtime Catholic revert and active volunteer in his local, thriving parish, explained that before the new motu proprio? He could tell himself, “Well, the Pope can’t fix everything.  It’s difficult, and complicated, and he can’t just step in and micromanage every problem in a Church with membership in the billions.”

Now? Oh, we have the time and energy to require every single priest in the world to get explicit permission to say a particular form of the Mass that was just fine for 400 years?  And require every bishop in the world to check in with Rome about it?  But somehow we don’t have time to clearly discuss the situation of one practicing-Catholic US president who is openly advocating for the killing of innocent children. Somehow we just can’t manage to deal with those bishops and clergy who are complicit in covering-up the rape of children.

Saying long-approved, perfectly fine, tried-and-true prayers of the Mass?  We have time for every single priest in the world to personally apply for permission and get approved or disapproved.  Raping children? Eh. We’re kinda busy, you know.  It’s a big church.  It’s so hard.

–> Though I am paraphrasing, I put the reaction in blockquotes because I want to emphasize that I’m reporting someone else’s POV.  Not a theology guy, just an average Novus Ordo Joe-Catholic.  And he feels personally stabbed in the gut by the Holy Father over a letter that has nothing, at all, to do with his own spirituality.

But we’re One Body in Christ.  Whap that funny bone and the knees go weak.

So yeah, the Holy Father is getting his unity.  A guy who never gave a crap about the TLM?  Honestly thought Latin-Mass people were a little kooky?  To quote him directly, “I’m sorry that I’m Catholic.”

He can’t help it.  He believes the Catholic faith.  But he’s unable to love it, and unable to ask anyone else to love it with him. 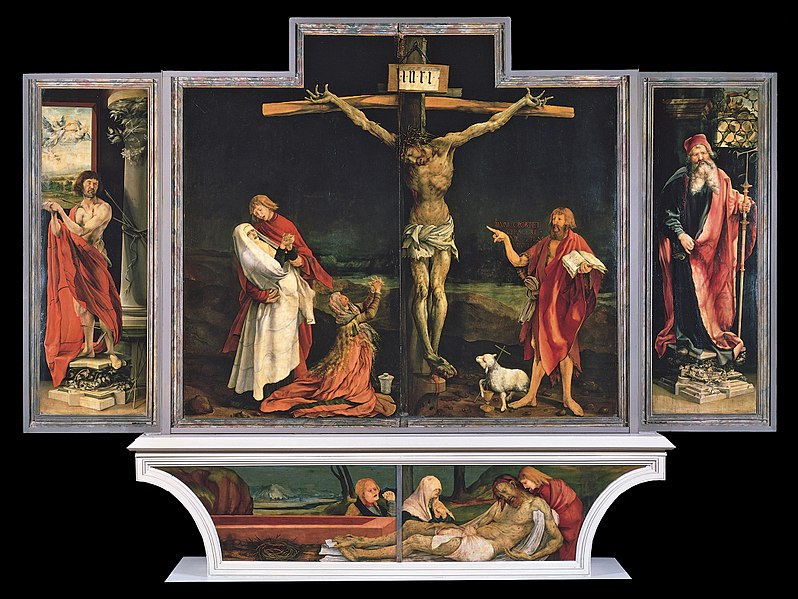 Artwork: The Isenheim Altarpiece, Colmar, France. I’ve been to see it twice in my life, and I love it, so, so much.  Not because it’s nice, but because it’s true.

Amy Welborn blogs about reactions from farther up the pyramid here.

July 21, 2021 Quick Takes on Msgr. Burrill's Resignation from the USCCB
Browse Our Archives
get the latest updates from
Sticking the Corners
and the Patheos
Catholic
Channel
POPULAR AT PATHEOS Catholic
1

Catholic
What You're Doing When You Vaccine-Shame Priests, and...
Sticking the Corners