Thoughts From The Women’s March On Washington

Thoughts From The Women’s March On Washington January 22, 2017 Kerry Connelly

There were so many of us there, it was more of an ocean tide than a march, a wave of people breaching the shores of our nation’s monuments. We were so many that we filled the parade route, so there was no place to actually go. Instead, if we all leaned one way, the tide came in at the Washington Monument. If we all leaned the other, the tide came in at the Capital building.

It was history, and nothing is more likely to make history than when you piss off a whole lot of women.

My bus left us off at the Navy Yard, and we walked about a half an hour. We felt like a large group, some of us carrying signs, some of us wearing pink hats. There were men, women, a few teenage children. Some of us wore jackets that said, Gays Against Guns. Some of us had pink hair. Some of us were older and some younger. All of us were determined.

As we walked to the site of the rally, cars on the streets would honk their encouragement. We thought we were a large group — there were so many busses! — but really, we were to become only a drop in that massive ocean. Soon, we met and merged with tributaries of others. They came from other bus drop offs, from the Metro, from who knows where. Looking up, there were people in buildings, hanging out of their windows, yelling for us and clapping. Our currents came together and we continued walking, following the current, until we came to be standing on a slight hill. Looking down, we could see where the current was almost blocked; the river of people had become a damned up lake, the crowd thick, shoulder to shoulder, sign to sign.

In the few moments before we flowed into that massive lake of people, I looked behind me. It was a tsunami. The street was thick with people. There was no telling sidewalk from road. There was certainly no turning back. If I wasn’t so encouraged by my fellow Americans, I might have made time to be scared.

We were massive and powerful, humorous and artistic. We were not just peaceful, we were kind. Riots were absent, but looking out for each other was the norm. We formed human chains as we entered the places of the rapids, where the crowd was so viscous we were in danger of losing each other. The signs were amazing. 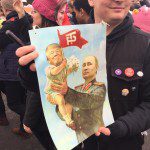 The atmosphere was joyous but also defiant. You can find Madonna’s speech online — we were so far away from the stage we didn’t even know it was her speaking until she started singing.

What Christians Did Wrong At The March

As the current moved us along, before it got so thick that we could barely move, we came across a man who was alone, on the side line, reading from scripture. There was a part of me who recognized this as beautiful at first — one person, reading from the Word, as thousands streamed by him. There was only one problem: he was using the word to call us all whores.

So people started kissing each other in front of him and his sign.

Later, we came across a group of white men reading scripture and holding signs that said “Submitting Is Scriptural”.

Mostly, they got the finger.  I did not make room on my camera for any of these idiots. And here’s the thing — this is what gives Christianity a bad name. This was a woman’s march. I wish there had been a group of white Christian men who were reading scriptures like Proverbs 31, which is a poem celebrating womanhood. Or that one where Jesus says, “What? No one condemns you? Guess what? I don’t either!”

On The Numbers and This Dangerous Administration

Trump is a lunatic, and his administration is terrifying. I will fight against it with all my might. I will stand up for justice and for what’s right. And I will use my words and my marching feet to move into action every chance I get.

If you haven’t seen this video of the Press Secretary’s conference, watch it and be afraid. The President’s ego is apparently so fragile that he needed to spend almost five minutes tearing into the press for accurately reporting the numbers of people who attended the inauguration compared to the numbers who attended the march. Let’s be clear: fragile egos do not make stable leaders.

What’s more frustrating is the way they can distort reality with such authority. They are working to undermine the press and that is a very dangerous thing. A transparent administration combined with a free press is a cornerstone of our American democracy and a safeguard against tyranny. That Trump and his cabinet are working hard to undermine that system smacks of dictatorship and propaganda.

I’m truly scared for our nation. I believe our founding fathers would be incensed at this buffoon who is now in the people’s house. And I am ready to stand with the resistance.

What gives me great hope is what I saw yesterday. Hundreds of thousands of women who got up at ungodly hours of the morning to ride buses and walk miles. Men who came out and said, “Not on my watch.” People who chanted things like “We need a leader, not a creepy tweeter.” 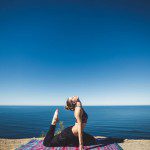 January 20, 2017
The Whole Woman Series: On Pausing To Move With Cordelia Gaffar
Next Post 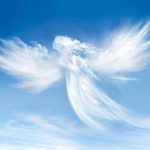 What is a Christian Response to...
FreedHearts
Related posts from Jerseygirl, JESUS