Piper and What We Must Believe

I have a friend who has chatted with me for years about what a person must believe in order to be saved. In his case the issue often comes down to whether one must believe Jesus is God, and he has contended that no text telling people what to do or believe in the NT ever says that, which at one level is of course true. No one asked Peter “What must I do to be saved?” to which Peter said, “You must believe in the Trinity!” Yet, yet, yet … things are not as simple as that.

Recently The Christian Post reposted a piece by John Piper in which Piper asked this question — “What are the most basic things a person needs to believe in order to be saved?” I’d like to sketch Piper’s response.

First, he conflates Acts 16:31 (Paul’s statement to the Philippian jailer) with Romans 10:9 (confess Jesus as Lord, believe he was raised from the dead).

Second, he unpacks what he thinks is at work, and I would not criticize for unpacking what is implicit. Though unpacking can be tricky; we can find what we want even if it is not there. Here is what Piper draws out and I have given them numbers:

So I take texts like that and begin at the core-the death of Jesus. He died for our sins, which means (1) I must believe I am a sinner. A person that doesn’t believe he is a sinner can’t be saved….So you must believe you are a sinner. (2) You must believe that there is a God who has created the possibility for sin. That is, sin by definition is the falling short of the expectations of your Creator. So there has to be a Creator God out there who has expectations of humans. God expects humans to trust him, love him and live for him. And we fail. Which leads us to the third thing we must believe. Because we fail to trust, love and live for God (3) we are under his holy judgment-his wrath. You’ve got to believe that. If you are a sinner and there is a holy God … you must understand that God is angry about sin. He is a good and just judge. So, what has he done to solve the problem of our alienation from him? He has sent his Son into the world. (4) You’ve got to believe in the deity of Jesus….He couldn’t have used John, or Peter or Paul to die for us. He had to have the God-man die for us. So the deity of Jesus is essential. (5) You also must acknowledge what Jesus did. He lived the perfect life. I don’t think you can believe that Jesus sinned and still be saved….(6) This substitutionary dimension of the death of Christ for my sins is necessary….Let’s just say that what is required is the core of the gospel-that the remedy is that Jesus Christ, the Son of God, who never sinned got in my place and took the wrath of God for me. He died in my place. (7) If he had stayed dead, we would still be in our sins. So you must believe he rose from the dead….

I am willing to stop there. This is the cluster of essentials for salvation….

(8) for salvation you must believe that instead of working for this salvation, Jesus has already done what needs to be done. We receive it. “As many as received him, who believed in his name, he gave them the right to become the children of God.” So I think sin, God, cross and faith. That is the summary, the core of truth surrounding those four things.

Which leads to a question about whether one must believe in the Trinity, and Piper’s conclusion is that one must not deny what is central to the Trinity. His approach is more that once we learn about the deity of Christ and the Spirit and then deny those verities, then he questions whether the person is saved for not.

I want to press back against this. And I want to use Piper’s own recent response about focusing on the Person of God vs. theological articulations about God. Piper quoted Acts 16 and Romans 10 and I’d like to draw our attention to what Paul himself focused on, and I want to suggest we can be satisfied with Paul said. Over all Paul’s words lead me to what I have said on numerous occasions since writing The King Jesus Gospel: first christology, then soteriology. Piper has put soteriology first. This issue of order is notable in the texts Piper himself quotes.

1. Paul told people to believe in King Jesus. Piper does not deny this but neither does he emphasize it or even articulate it: the essence of our faith is to trust in and surrender ourselves to Jesus, the Person, the one who lived and died and who was raised for our redemption. This is why in Romans 10 Paul says something about heart and mouth: the heart is the personal engagement with the Person of God. What is necessary for salvation is personal engagement — as trust/surrender/faith/etc — with God as Person in the face of Jesus as Person. To the Philippian jailer Paul only calls him to engage this Person: believe in the Lord/King Jesus.

2. Paul said confessing Jesus as Lord is central to salvation; again, christology first. I don’t see any focus in Piper’s sketch on Jesus as Lord, as King, though he does articulate the deity of Christ. I’m not so sure believing in the deity of Christ is identical to confessing — which is an existential surrendering to — Jesus as King/Lord. I am fully persuaded John Piper would agree with what I’m affirming here.

3. Paul said believing Jesus was raised from the dead is central to salvation. Of course, resurrection only comes into play if Jesus died, which is at work in Paul’s words here when he says “from the dead.” I would not wait until item #7 to bring up the resurrection. Jesus’ life, death and resurrection and exaltation/coming again are vital elements of the one saving Story about Jesus.

There you have it: for Paul salvation is about surrendering to the Person Jesus, who is Lord, Messiah, King and Savior. It is about believing he was raised from the dead. This Person indeed saves, but I want to stick with what Paul says right here when he lays down the bricks for all to see: these are fundamental statements by Paul in Acts 16 and Romans 10. Lordship and resurrection; he saves — which then leads to all the elements in Piper’s breakdown: if he saves he saves from something, and that something is sinfulness (in all its hideousness), and he does that, Paul says elsewhere but not in the text quoted, by dying on the cross for us … and his death is atoning (and that can be unpacked).

What Happens in the Lord's Supper...
Euangelion
Related posts from Jesus Creed

The Power of “A Hidden Life”
The films of director Terrence Malick are certainly not everyone’s cup of... 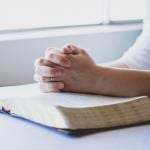 Praying for Abortionists and Those in the Abortion...
Many years ago, when we spoke at the same prolife event, I met and...
view all Evangelical blogs
What Are Your Thoughts?leave a comment
Copyright 2008-2017, Patheos. All rights reserved.