The study basically simulated your average morning: a mug of coffee to wake up, a little gym time, another cup with breakfast, followed by lunch. Fourteen participants completed two moderate workouts on a stationary bike: one where they took caffeine (equal to two 8-ounce cups of coffee or 4 cups of black tea) 90 minutes before the workout, and one where they took a placebo. When caffeinated, the participants reported the ride as way easier than it was without the stimulant.

But wait—there’s more! The researchers also examined how that caffeine affected eating habits later in the day by treating the subjects to a sandwich buffet and tracking their calories consumed. When caffeinated pre-workout, subjects ate about 72 calories less than when they had the placebo. Moral of the story: caffeine makes your workout more fun and keeps you from overindulging later in the day. Cheers to that!

October 23, 2014
Jesus Creed: For the Whole Church
Next Post

October 24, 2014 Reformation Revived in Disillusionment
Recent Comments
2 Comments | Leave a Comment
Browse Our Archives
get the latest from
Evangelical
Sign up for our newsletter
POPULAR AT PATHEOS Evangelical
1 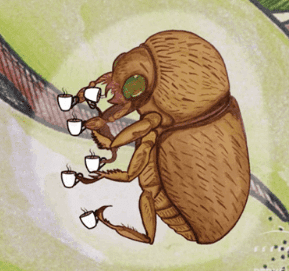 Evangelical
Another Coffee on My Short List
Jesus Creed

just for fun | Family Thanksgiving Vacay!
Five out of six of our extended family households were able to...
view all Evangelical blogs
What Are Your Thoughts?leave a comment
Copyright 2008-2021, Patheos. All rights reserved.