Kingdom of God, Politics, and Romans 13 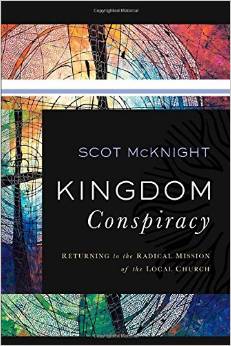 In a recent blog post, Greg Boyd, who endorsed my Kingdom Conspiracy, weighs in on why we dare not let kingdom of God be connected to politics. He provides 12 reasons and I endorse the thrust of his post — yet over and over we see folks using the expression “kingdom of God” for political activism and social justice activism shaped by political alliances.

Kingdom of God, instead of aligning with already existing political powers, created a new kind of kingdom with a new king, a new rule and redemption, a new people, a new law and a new sense of place. The ethic of the kingdom is for those people living under that king not for the public sector living under other kings.

It violates the integrity of kingdom theology to impose that ethic or vision on others and turns kingdom theology into a secularized (I mean that term as “worldly” not as in “secular humanism”) alternative. One can’t enter into kingdom ethics apart from living under the king and participating in that king’s redemptive rule. One compromises that kingdom and that rule and that king when one softens or adjusts it all to fit under another empire’s orders and ways of being.

Greg Boyd rightly observes that when this happens we become complicit in evils and violence but we deconstruct mission.

A letter from a friend asks me then about Romans 13:

Romans 13 is a passage that you didn’t deal with and is one of the central passages many would cite in defense of a political theology. Could you give an interpretation of that passage in light of your argument about what Jesus meant when he talked about kingdom?

One cannot of course interpret Romans 13 in its entirety in a single blog post, but putting the whole text here gives us a chance to make a few observations:

Rom. 13:1   Let everyone be subject to the governing authorities, for there is no authority except that which God has established. The authorities that exist have been established by God. 2 Consequently, whoever rebels against the authority is rebelling against what God has instituted, and those who do so will bring judgment on themselves. 3 For rulers hold no terror for those who do right, but for those who do wrong. Do you want to be free from fear of the one in authority? Then do what is right and you will be commended. 4 For the one in authority is God’s servant for your good. But if you do wrong, be afraid, for rulers do not bear the sword for no reason. They are God’s servants, agents of wrath to bring punishment on the wrongdoer. 5 Therefore, it is necessary to submit to the authorities, not only because of possible punishment but also as a matter of conscience.

Rom. 13:6   This is also why you pay taxes, for the authorities are God’s servants, who give their full time to governing. 7 Give to everyone what you owe them: If you owe taxes, pay taxes; if revenue, then revenue; if respect, then respect; if honor, then honor.

Rom. 13:8   Let no debt remain outstanding, except the continuing debt to love one another, for whoever loves others has fulfilled the law. 9 The commandments, “You shall not commit adultery,” “You shall not murder,” “You shall not steal,” “You shall not covet,” and whatever other command there may be, are summed up in this one command: “Love your neighbor as yourself.” 10 Love does no harm to a neighbor. Therefore love is the fulfillment of the law.

Rom. 13:11   And do this, understanding the present time: The hour has already come for you to wake up from your slumber, because our salvation is nearer now than when we first believed. 12 The night is nearly over; the day is almost here. So let us put aside the deeds of darkness and put on the armor of light. 13 Let us behave decently, as in the daytime, not in carousing and drunkenness, not in sexual immorality and debauchery, not in dissension and jealousy. 14 Rather, clothe yourselves with the Lord Jesus Christ, and do not think about how to gratify the desires of the flesh.

The biggest mistake made in the Christian and politics discussion is to assume that what God has said to the covenant community (e.g., Israel, the church) is also for the non-covenanted people. To be sure, God’s will is God’s will and therefore God’s will for all, but the kingdom vision of Jesus is for kingdom people not for non-kingdom people. We are not called to impose kingdom ethics on the world but to call people into the kingdom.

Romans 13 is how a kingdom apostle, Paul, thought about how to deal with the Roman empire. He wasn’t telling Rome how to live. Rome didn’t care what Paul thought.

First, Paul believes God is sovereign and that all powers that exist are underneath God’s powers. This does not say all powers are good but it does say political power is designed by God to be good and just. Rome, for all its glories and all its evil, was under God’s power. Paul does not hereby sanctify Rome or all of Rome.

Second, Paul counsels disempowered and unempowered church people to adopt a strategy of being good. We constantly need to remind ourselves that Christians (and Jews) in Paul’s world were not empowered voters but mostly right-less folks living in the Roman empire. This is not advice for citizens who can vote directly. And, notably, this disempowered set of Christians in Rome were at that time not experiencing persecution. Paul is not talking here to the persecuted church but to a church that has no political power.

Part of being good and doing good (Jesus and Peter use this expression for what I’m talking about here in Paul) is paying taxes. Christians are not anarchists — but that is not a “principle” so much as a way of life that, under other circumstances would have to change. If persecution comes one follows Jesus.

The essence of being good is being people of love.

The expressions of being good in love is to cease from the ways of life they know in the Roman empire, not least among its empire leaders. That is, they were to be holy in their love.

Third, Paul would never endorse all powers as good and right and Paul would stand with Christians who suffered for doing what was right and good if Rome threatened to raise its mighty hand. Within Romans 13 we must see the standard early Christians respect for powers that was simultaneously a willingness to obey Jesus even if that meant what we today would call civil disobedience. In other words, endorsement of government as God-designed is not endorsement of all government does. The Left today and the Right today both agree that government is good (except when the other party is in control!) but can get out of control. So much more is the case for 1st Century Rome.

Perhaps to be observed for our context today, there is nothing here about activism in order to change the government. But we need to be careful: nor did they have the situation where they could do such. What our text says is that Christians are to be respectful of the powers — Nero is on the throne folks — and be good and be loving and be holy. There is not thought of taking over Rome to control the empire.

The politics of Paul then is goodness, love and holiness — formed in and among an alternative community (called “church”) that indwells this world, witnesses to this world, calls people from this world into the community of Jesus and while indwelling this world lives a commendable, loving life. The activism of Paul is to work for the good of all by being loving, compassionate and just. Will this mean, today, that we’d join in on just activisms? Of course, but not by aligning ourselves with the empire.