What is Anglicanism? (J.I. Packer Speaks)

Recently Michael Jensen, at TGC’s site, had a post about the nature of Anglicanism that focused quite rigorously on a conservative version of Reformed soteriology, and you can read his emphases at the link. I countered a bit by suggesting it was creedal to the core. But now another heavyweight, J.I. Packer, has weighed in on the nature of Anglicanism. And their perspectives, while they might agree on lots and lots theologically, reveal that Anglicanism can be approached from a number of angles. I have put in bold the operative emphases of Packer.

I identify myself as a heritage Anglican, or a main stream Anglican, on the basis of that view of things. I adapt to state my Anglican identity, words from the great Pastor Duncan of the Free Church of Scotland, who something like 150 years ago, said in answer to a question about his identity as a minister of the church, “I’m first a Christian, second a Protestant, third a Calvinist, fourth a Paedo-baptist, and fifth a Presbyterian”. Well, I go with the first four; and then “fifth I’m an Anglican”. And if I’m asked to explain further what is the Anglicanism that I stand for, I reel off eight defining characteristics of my Anglicanism like this.

Anglicanism is first biblical and protestant in its stance, and second, evangelical and reformed in its doctrine. That’s a particular nuance within the Protestant constituency to which the Anglican church is committed – the 39 Articles show that. Ten, thirdly, Anglicanism is liturgical and traditional in its worship.

I go on to say, fourthly, Anglicanism is a form of Christianity that is pastoral and evangelistic in its style. I quote the ordinal for that and I point out that ever since the ordinal and the prayer book required the clergy to catechize the children, Anglicanism has been evangelistic, though the form of the evangelism has not been that of the travelling big tent – the form of the evangelism has been rather institutional and settled; the evangelism was part of the regular work of the parish clergyman and the community around him. But let nobody say that institutional parochial Anglicanism is not evangelistic and, today, I know the wisest folk here in England are recovering parochial evangelism in a significant way. Thank God they are.

And then I say, fifthly, that Anglicanism is a form of Christianity that is episcopal and parochial in its organization and, sixthly, it is rational and reflective in its temper. I make a point of that. I say that, in Anglican circles, any question can be asked and the Anglican ethic is to take the question seriously and discuss it responsibly. There are, of course, Protestant churches which, I think you have to say, are always running scared and as soon as a question of this kind – a real puzzle of our Christian truth, of the ways of God – is raised in their circles, they bring out the big stick. “Now you mustn’t talk like that, you shouldn’t be concerning yourself about that. Just stay with the ABC of the Gospel and Bible truth”. Theological reflection is discouraged rather than helped on its way. That makes, I believe, for real immaturity. So I celebrate the fact that Anglicanism, characteristically is rational and reflective and believes in the discipline of debate and sustained discussion, believing, you see, that like panning for gold, the gold of truth will be distilled out through the discussion and the dross of error will be panned away.

Seventhly, I tell people that Anglicanism as a form of Christianity is ecumenical and humble in spirit. Unlike some denominations, we do not claim that Anglicanism is self-sufficient. What we say, rather, is that the Anglican way is the way of a person with an unlimited charge card going through a large department store and being free to say of every valuable thing you see and would like to make your own: “That’s for me. Put it on charge”. Anglicans have always rejoiced to receive wisdom from outside their own circles. They have a vision of Christendom as a fragmented reality with flashes of truth and wisdom scattered all across the board. Our business as Anglicans, seeking the glory of God, is to pick up as much truth and wisdom (get as much help, I mean, from these scattered shards of truth and wisdom) as we possibly can. I am comfortable with that. I would be uncomfortable with anything else.

Then, eighthly, I tell people that Anglicanism characteristically is national and transformist in its outlook. By `national’ I mean that the Anglican way is to accept concern for the spiritual condition of the national group within which the gospel is being preached. By `transformist’ I mean that Anglicans seek, under Christ, to see the culture changed into a Christian mould as far as maybe. So Anglicans have always been concerned about education and educational institutions, and about a Christian voice being raised in Government and things of that kind. Please God, it will always be that way wherever Anglicans go.

All this sounds, I suppose, very triumphalist; but I do believe that Anglicanism embodies the richest, truest, wisest heritage in all Christendom. When people say “Those are fine words but everywhere in the west Anglicanism is sinking”, I have to admit – in Canada, yes, and in Britain, yes, and in the States, yes, and in Australasia, sure. It is true; but still, I think, we may stay our hearts by reminding ourselves what is going on under Anglican auspices in black Africa. There the church grows and the gospel advances by leaps and bounds.

March 23, 2015 Wifely Submission: Two Views
Recent Comments
26 Comments | Leave a Comment
"'This renewal began first with the renewal of the people of God (chapter 5 or ..."
Kostya2 Putting the Bible Together
"In Christ, there is no Jew or Greek, male or female."
Silverwolf13 Go Home or At Home?
"I just started to read about Scot Mcknight! His arguments are good.However, I recommend Scot ..."
Yechan Namgoong Tim Keller under the Eye
"" if it be Your will" 1 John 4:14,15 says, 14And this is the confidence ..."
disqus_5T2jXBEN10 JesusCreed.org Blog Prayer
Browse Our Archives
Related posts from Jesus Creed 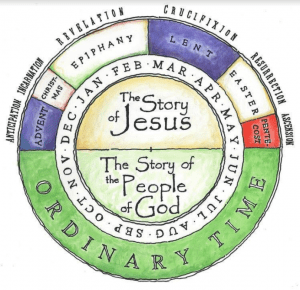 Right-Wing Wokeism
Woke progressivism encourages groups to think of themselves as victims of systemic...
view all Evangelical blogs
What Are Your Thoughts?leave a comment