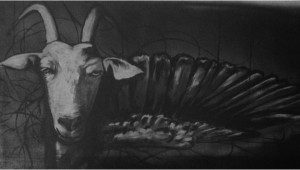 As Thomas Aquinas once offered five ways to know a God exists, so too I hope to offer five ways to know that hell is not “eternal conscious torment.” Like Aquinas, my arguments will be philosophical in nature. Though I think there are many solid biblical reasons for rejecting the traditional view of hell, these arguments will be based on deductive thinking, and today we come to a third way.

Way Three: The Desires of God

In 1741, Jonathan Edwards preached a sermon called “Sinners in the Hands of an Angry God” climaxing with a powerful image. “The God that holds you over the pit of hell—much as one holds a spider or some loathsome insect over the fire—abhors you and is dreadfully provoked: his wrath towards you burns like fire; he looks upon you as worthy of nothing else but to be cast into the fire.” Really? I imagine many who believe in Edward’s hell will not affirm Edward’s strong language here, but I don’t know how you avoid it.

In a set of posts a few years back I asked, “Why does God feels it necessary to sustain the life of the damned for trillions upon trillion of years? Has the local stripclub owner (for example) so violated God’s moral expectations that the best response God can imagine is a state of unceasing agony?”

Most arguments for the traditional view of hell appeal (you guessed it) to tradition and from tradition to interpreting the Bible. Though tradition can be exceedingly important in how we read the scriptures, I would suggest the only healthy hermeneutics will hold as primary the assumption “God looks like Jesus.” Any biblical interpretations that push against this presupposition will be, in my mind, by necessity false. (There is not a Jesus-looking-God because the Bible says so; the Bible gains its value and authority because it pictures the actual God who looks like Jesus. If the Bible did not picture the Jesus looking God, it would hold the same status as other ancient religious texts for all other gods are fictitious). It is because Jesus looks like God that the Bible is worthy of devotion, and it is in the light of this presupposition that the traditionalist must make sense of hell.

This problem becomes even more troublesome for those who believe God has foreknowledge of future events. If omniscience means knowledge of who will and will not respond to God’s offer of grace before he actualized them then God is clear making a soul knowing its future will be abhorrent.

Given their picture of God, traditionalists must establish a reason—any reason—why the Jesus-looking-God would think actualizing a world with a sphere of indefinite torment for a human soul would be a worthy choice. If there are no good answers, then we have a good reason to reject the traditional interpretation of hell.

A Few Bits of House Keeping:

First, there is no reason to think that hell exists in all possible worlds.

Second, if God actualizes a world in which eternal conscious torment is a possibility, than God is culpable in part if some of his creatures experience unending incarceration in its fires.

For those who wish to argue that “God does not send anyone to hell, but we send ourselves,” let me offer an analogy. If you have children, having a loaded pistol in your home may be a worthy choice, but there are clear risks. Parents know one possible outcome of having a gun is that one of their children may kill himself or another. If such a tragedy occurs, it will not matter how strenuously the parent told the children to avoid the gun, or how many precautions were taken to keep the gun safe—the parent will be partly culpable. So too eternal conscious torment.

So Why Does God Want Hell?

In case it’s unclear what I think is required from the traditionalist to overcome this problem, I’ll give you an example of what such answers might look like since I do think Jesus wants hell to exist.

As many of you know, I think the hell described in the Bible is the place where death, sin, and the souls of the damned are destroyed. This view is often called Annihilationism, and it strikes me as both the best way to understand the numerous passages on hell, judgment and the future of the wicked and the best way to understand how God is reconciling all things to himself while respecting human freedom and dignity. I have no trouble squaring this view of hell with my ideas about justice, love, mercy, and the character of God I see revealed in Jesus. On this view, here are a handful of reasons I think hell desirable:

(1) Given annihilationism, God has wronged no one who has actually been created. Both the lives of those who exist forever in the New Creation and those whose lives end after the judgment both have lives worth living (Not so given the traditional view in which the condition painted of the damned is unredeemably tragic and therefore not worth living).

(2) Given annihilationism, Hell allows human freedom to reach its climax. If one does not want “the eternal kind of life” Jesus offered there is a clear alternative—not having an eternal life and ceasing to exist. (Conversely, the alternative in the traditional view is existentially horrific and as such, if known, is not really an option.)

(3) Given annihilationism, hell is supremely merciful. To end the life of someone who has irreversibly wed themselves to sin is an act of exceeding kindness by God—lest such souls continue on zombie-like for all eternity. (Again, the traditional view has God through eternity allowing some souls to exist under the brutal rule of sin).

(4) Given annihilationism, Hell allows God to punish a Stalin or a pornographer or a slave trader in exactly the right amount before allowing their souls to pass out of existence. (Not so the traditional view. Everyone will experience “eternal” punishment, as such no matter what the severity of their past sins, everyone in hell will eventually suffer an infinite amount of torment).

I could go on, but these outcomes of hell seem both desirable to me, and I could see them being desirable to the all-knowing, supremely loving God when he decided—in the beginning—which reality he would actualize.

So bring it strong and pithy traditionalists: Why does Jesus want hell to exist? If no good answers are forthcoming, it will give us another solid reason for rejecting the traditional reading of hell as everlasting conscious torment.

Jeff Cook teaches philosophy at the University of Northern Colorado. He is the author of Everything New: Reimagining Heaven and Hell(Subversive 2012), and a pastor of Atlas Church in Greeley, Colorado. You can connect with him at everythingnew.org and @jeffvcook.

May 18, 2015
The Death Penalty: American Law vs. Christianity
Next Post

May 18, 2015 Revitalizing Around the Presidential Library
Recent Comments
34 Comments | Leave a Comment
"This article starts a series on what A Course in Miracles (ACIM) implies when acim ..."
burakdeniz The Miracles of Creation? (RJS)
"It is your confidence in these thoughts that needs pardoning and what causes absolution a ..."
burakdeniz The Miracles of Creation? (RJS)
"Scot, 1 Cor 16:15-18 asks the Corinthians to submit to the leadership of Stephanas and ..."
Richard Fellows Finishing Well With Clement
"I can only guess that they look at Trump as a kind of god like ..."
D.M.S. The Gospel of With Us and ..."
Browse Our Archives
get the latest from
Evangelical
Sign up for our newsletter
POPULAR AT PATHEOS Evangelical
1