Transformation: How Vital to the NT Gospel?

Transformation: How Vital to the NT Gospel? September 22, 2015 Scot McKnight 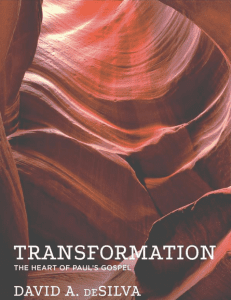 Martin Luther is famous for arguing — in the presence of observable realities in his churches — that Christians are simultaneously righteous and sinners. John Calvin was not as sanguine about the potential implication of that kind of teaching so he taught a more forceful theory of sanctification but not even Calvin was as expectant as many in the radical reformation who expected that Christians would be both in fellowship with a body and be transformed through that fellowship into an observable form of discipleship. The Wesleyan and Holiness tradition(s?) brought attention to the sanctification theme of Calvin and the radical reformers and the pietists but from different angles (as a movement rooted in the Anglican church).

So, the question now arises, How important is transformation or change in your understanding of the gospel? Whether one wants to acknowledge it or not, the answer to this question leads to an answer to another question: Who is a Christian?

David deSilva at Ashland Theological Seminary has a new book called Transformation: The Heart of Paul’s Gospel (Lexham, 2014) that pretty much answers the question in the title.  So he opens with a realistic assessment about how we understand Paul’s gospel:

What was this “good news” that he announced throughout Syria, Turkey, Greece, and eventually even in Rome and possibly in areas further west? “You can be sure that, if you were to die tonight, you would go to heaven”; “If you trust Jesus, all your sins will be forgiven, and you’ll be guaranteed a ‘not guilty’ verdict at the Last Judgment”; “Jesus died in your place, so now you don’t need to be afraid of God, of judgment, or of death”; “All you need to do is to confess Jesus as your savior and believe in his name, and you can be sure that you’re saved.

There’s truth in each of these statements, supported by one or more passages from Paul’s writings…. (1)

Yes, many of us say this: these statements are true but they aren’t true to the way gospel is framed in the NT. David deSilva offers here a kind of Anglican-Wesleyan (?) perception of the transformative power of the gospel in our lives today. Which means, he’s focused on the impact of the gospel.

How does deSilva frame the gospel of Paul?

God offers you the means to become reconciled with him and to become a new person who will want and love and do what is pleasing to him because the Spirit of his Son will live in you and change you. The result of God’s kindness and activity is that you will live a new kind of life now and, after death, live forever with him.

As I have come to understand Paul’s message, it is all about change. The good news is nothing less than that God has set in motion the forces and factors that can transform all of creation and make it new, good, and right once again—including us. This transformation remains from beginning to end a work of God’s favor or “grace,” for it begins at God’s initiative; it transpires through the working and the power of the gift that God has given, namely the Spirit; and it is brought to completion because of God’s commitment and faithfulness. But the accent remains on transformation as God’s goal for God’s gifts and as the result in our lives and churches if we have not “received God’s grace for nothing,,” to borrow a phrase from 2 Cor 6:1, or if we do not “set aside God’s grace,” to borrow a phrase from Gal 2:21 (2).

A major problem in Pauline theology today—major not primarily because it is advanced among theologians or scholars but because it has taken deep roots and is confidently promoted throughout the Christian Church—is the tendency to reduce Paul’s gospel to something far more limited, far less pervasive, far less invasive in terms of what God seeks to do within and through those who put their faith in Jesus than Paul’s own written testimony suggests (5).

I like deSilva’s emphasis but I will say of his approach what I have said about the soterian approach in my book The King Jesus Gospel. In this book, which we will blog through, David pretty much equates gospel with soteriology and his soteriology has a strong sanctification or transformationist theme, and I agree with that kind of soteriology. But the gospel, articulated overtly in passages like 1 Corinthians 15:3-8 and 2 Timothy 2:8, is first of all christological — it is to tell a story about Jesus as Messiah and Lord of all, whose life was one of entering into our human condition (ending in death) in order to raise us from that human condition. Thus,

Not a word about transformation can be found here in Paul’s overt statement about the gospel. Not a word. That’s important to me, and neither is a word found in 2 Tim 2:8 though in the verses that follow there is a clear demand that those who aren’t transformed or faithful are not gospelized people.

Yes, the Messiah is the Savior but he is not reducible to the means of redemption but instead he is the subject of redemption. Jesus is Messiah and Lord and union with him has the benefit of salvation/redemption and transformation but the gospel itself begins with a christology. Put again: a genuine gospel articulates the message of Jesus, and inherent to that message about Jesus is the implication of salvation and transformation.

deSilva puts his finger on a pervasive weakness in some forms of the soterian gospel: it too often lacks the implication of transformation. On that I agree with David, and so we will go through this book.

So I would say that change is not the gospel. The gospel is that Jesus has been crucified and raised and those who are in fellowship with him can and will be changed into Christlikeness. Christoformity is not the gospel; it is what happens when the gospel impacts a person.

September 22, 2015 Scripture and (Ancient) Cosmology (RJS)
Recent Comments
12 Comments | Leave a Comment
"Avoidance of these verses is at the heart of faulty conclusions. Humanistic interpretations are why ..."
Glenn Harrell What To Say When Someone Says ..."
"I think what you should say is: "I don't want to kink shame, but that's ..."
Spirit Plumber What To Say When Someone Says ..."
"Jesus dying temporarily for our sins doesn't really make much sense. Here's why:Let's say I ..."
C Nault What is a “Sacrifice of Atonement”?
"Any updates on when it will be released???"
Brian Kelly The “Second” Testament
Browse Our Archives
get the latest from
Evangelical
Sign up for our newsletter
POPULAR AT PATHEOS Evangelical
1

What Rejecting God Did to Higher...
Cranach
Related posts from Jesus Creed