So What’s a Pagan Priest? 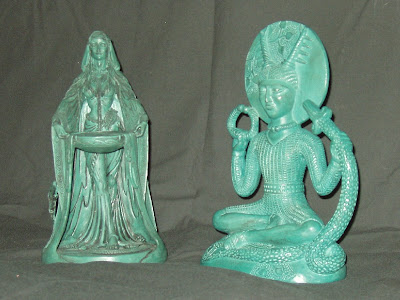 Those of you who were part of my Second Dedication last year know that one of the things I’ve felt called to be is a priest. And for more than a year since then, I’ve struggled to figure out exactly what that means. I’m at a point where I feel like this needs to be my top spiritual priority.

So what does it mean to be a Pagan priest? What have I signed up for? What do I need to be doing?

Our earliest ancestors had no priests – each person paid his or her own tribute to the ancestors, nature spirits, and deities of their family, tribe, and location. Eventually, as agricultural surpluses led to specialization, some people specialized in performing religious rites – the first priests.

In some cases, they guarded their specialization carefully. Egyptian priests managed the temples, cared for the idols, and performed the daily and seasonal rituals. Only the priests were properly trained and pure enough to deal with the gods – if you wanted to address a god, you had to go through the proper priest. Even in the modern Catholic church, if you need some things done (such as absolution from sins) you must get a priest to do it for you.

The Protestant Reformation brought about the concept of “the priesthood of the believer” – the idea that each person could address God directly, with no intermediary required. This concept was carried over into the Pagan revival of the 19th and 20th centuries. In Gerald Gardner’s first Wiccan Book of Shadows, a new initiate is proclaimed “Priestess and Witch” at the conclusion of the First Degree Initiation. This idea is even stronger in a CUUPS setting, which is governed by the democratic process and not by a High Priestess or High Priest.

Clearly, in our modern Pagan tradition, priesthood is not a title to be claimed or a status to be achieved, it is a role to be filled. What, then, is that role?

First and foremost, a priest (or a priestess – I’ll use the masculine because I’m primarily talking about myself) is a servant of the gods. And if you’re going to serve them, you have to know them. So the first duty of a priest is to spend time in communion with your patron deities.

I’ve been pretty good about evening prayers over the past year, but I think I do too much talking and not enough listening. I need to listen more, particularly at this time of the year when the weather is so conducive to sitting outside.

In our rituals we speak of the gods as our most honored guests, and we invoke them in accordance with the ancient laws of hospitality. Another duty of a priest is to make the gods feel welcome and honored with offerings and praise.

Our gods aren’t looking for subservience, just for some honest love and devotion. Isaac Bonewits says that the gods are like rich relatives – if you talk to them regularly when things are going well, they’re much more likely to help you out when things go bad.

I think I could do much better here. I tend to speak of the Goddess and God at a high level, which is easy to explain to people coming from a traditional monotheistic background. But in my private devotions there is simply no reason not to speak directly to and of the god and goddess who have called me, Cernunnos and Anu.

The mediating functions of a priest can work both ways. Our fellow Pagans don’t need us to approach the gods for them (most of the time, anyway), but the gods can certainly use our help to approach other people. I’m not talking about evangelism of the Christian sort (proselytizing is a no-no in almost every modern Pagan tradition) so much as being able to articulate your faith and tell your sacred stories in an appropriate setting.

I think I do a fair job of articulating my faith when asked, but I haven’t given much thought to sacred stories. Part of that is because the god and goddess who have called me are so old that there are virtually no stories of them extant today. But there are other stories that illustrate the same principles, and I can always write my own. I need to work on sacred stories.

Finally, priests serve a community. Not to rule over it as in other faith traditions, but to assist others along the same path. I serve in a leadership role with CUUPS, doing my best to contribute where I can and make sure the trains run on time. I think that’s all that’s appropriate in a CUUPS setting, although others may disagree.

That’s how I see the role of a priest – that’s what I think I need to be doing. What have I overlooked?

October 5, 2008 Halloween
Recent Comments
0 | Leave a Comment
"Same here. I'm a vet tech who adores the natural world and rewatches BBC documentaries ..."
Trellia (she/her) Hey Neil deGrasse Tyson: Let People ..."
"Grammar changes over time - and has changed."
John Beckett 6 Ways to Talk to the ..."
"I do wish the grammar were better. "a deity" = singular = can never be ..."
Bryon Cake Smith 6 Ways to Talk to the ..."
"I mean, really:Hard to take science cues from the Maya, who never discovered the wheel, ..."
MadGastronomer Hey Neil deGrasse Tyson: Let People ..."
Browse Our Archives
Related posts from John Beckett