I’m back from the Druid Gorsedd at Pema Osel Ling, a Buddhist retreat about an hour south of San Jose, California. It was a wonderful experience on so many levels, most of which I’ll talk about and some of which I can’t.

I met sixty-something OBOD Bards, Ovates, Druids and friends. I had a small part in the main Lughnasadh ritual, a larger part in the Ovate initiation ceremony, and a supporting role in the Bardic initiation ceremony. To my shock, I was invited to be on the panel discussion on Druid Spiritual Practice. And along with the only other person there who had begun the Druid level studies but hadn’t yet completed them, I was given a Druid grade initiation (it was simple, effective, and very insightful – and that’s all I’m going to say about it).

I took a few pictures with the iPhone – I’ll post some of them. There were professional photographers and videographers recording the whole event. As soon House of Danu posts their stuff, I’ll link to it. 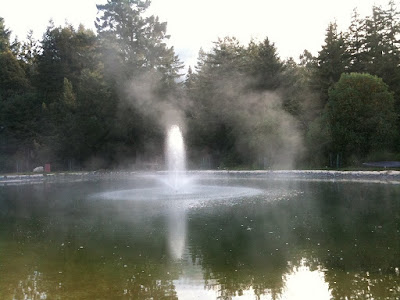 This is the small lake and fountain at the entrance to the retreat. 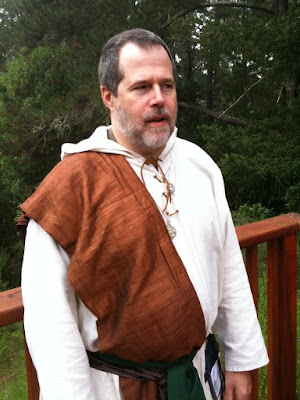 And this is me, waiting for the Lughnasadh procession to start.

Much, much more later this week.

August 4, 2009 Special Guests
Recent Comments
3 Comments | Leave a Comment
Browse Our Archives
get the latest from
John Beckett
Sign up for our newsletter
POPULAR AT PATHEOS Pagan
1

Celebrating the Dead, Decay and Letting...
Charged by the Goddess
Related posts from John Beckett

The Morrigan - Faerie Queen
The Irish Morrigan and the Roman Diana are perhaps the best-known Faerie...

A good magic operation: when you panic, celebrate
A good magician observes flow, rather than prance about in interventions.
view all Pagan blogs
What Are Your Thoughts?leave a comment
Copyright 2008-2020, Patheos. All rights reserved.