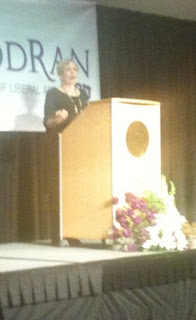 Last night Cathy and I went to TCU to hear Karen Armstrong give the inaugural Daryl D. Schmidt Lecture on Religion in Public Life. Her topic was “Religion in an Age of Terror: Perils and Possibilities.” She spoke for an hour, then took questions for about 20 minutes. There was a book signing afterwards, but we had a 70 mile drive to get home so we didn’t stay for that.

She began with a story – not from the Abrahamic faiths, but the story of the Buddha: how his father sheltered him from all suffering in an effort to keep him from becoming a monk, but he still ended up seeing illness, death, and suffering… and left his place as prince to find a solution to suffering. The point of the story is “however hard we try to keep out the world, it will break through” and “we cannot truly practice compassion until we recognize the pain of humanity.”

She said that what is frequently called “religious violence” has its roots in politics, not in religion. All the major religions developed in societies that were changing, but also where “warfare reached a crescendo.” All developed an ethos to refute violence, centered around compassion: “the kickstart was revulsion with violence.”

All religions have a form of the Golden Rule: this is the core of religion, not God, not creation, not a moral code, but compassion. She quoted the Dalai Lama, who told a young person that there was no need to convert to Buddhism, since all religions teach compassion.

Unlike her book A History of God, this talk focused entirely on compassion and the ethics of compassion. Obviously, you have a lot more room in a book than a 1-hour lecture, but while I was impressed with her understanding of the commonalities of world religions and her insight into the causes of fundamentalism and terrorism, I was a bit disappointed she didn’t even touch on mysticism or any other form of religious experience.

Armstrong has a new book out titled The Case for God, which is intended as a rebuttal of the New Atheists. it’s on my to-be-read list.

The TCU campus newspaper has an article on the event (including a better picture) here.

October 8, 2009 The History of the Druids
Recent Comments
1 Comment | Leave a Comment
Browse Our Archives
get the latest updates from
John Beckett
and the Patheos
Pagan
Channel
POPULAR AT PATHEOS Pagan
1