A World Full of Gods 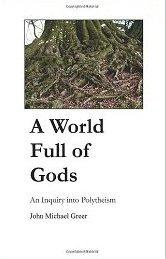 In preparing for our second Intermediate Pagan Practice class, I pulled John Michael Greer’s A World Full of Gods off the shelf. It was published in 2005 and I read it in 2006, both before I began this blog. I’ve mentioned it in the past, but I’ve never given it its own blog entry. Reading through it today, I see that was a mistake.

Here’s the bottom line: this is far and away the best book on contemporary polytheistic Pagan theology available today. If you consider yourself a Wiccan, Druid, Heathen, or any other flavor of Pagan, you need to read this book.

He also wisely says “Evidence from religious experience, important as it is, must be tempered with evidence from everyday life.” Here are a couple of his observations of that evidence.

It can be argued that the universe, with all its evils and miseries, is consistent with the existence of a single, unique, omnipotent, omniscient, and omnibenevolent god, but that claim is hard to defend and open to forceful challenge. The claim that evil and suffering are consistent with the existence of a large number of limited gods, on the other hand, encounters no such difficulties. From this standpoint it’s reasonable to say that traditional polytheism is a more straightforward explanation for the world we actually experience than classical monotheism.

It’s easy for me to accept Greer’s ideas because they match my own experiences. I have experienced several deities first-hand, most notably (and most strongly) Cernunnos, the Celtic Lord of the Animals. Polytheism fits nicely into my overriding Pantheism. As Greer says “The gods participate in unity along with everything else.”

Ultimately, All is One. The gods and goddesses just understand this better than we do.

Cernunnos, as depicited on the Gundestrup Cauldron. Photo from Wikimedia Commons.

Pagan
We Have Only the Rights the Majority Deigns...
John Beckett
TRENDING AT PATHEOS Pagan