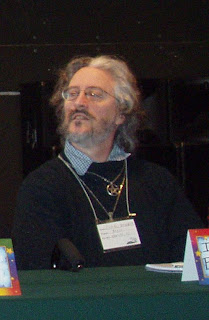 The Pagan, Druid and UU worlds have lost one of our pre-eminent elders – Isaac Bonewits died today.  Here’s the announcement from his wife Phaedra:

“This morning, August 12, 2010 at approximately 8 AM ET, Isaac Bonewits passed away peacefully in his sleep. All his brothers and sisters arrived at his side last night. His family and friends surround him now.”

Obituaries and tributes are all over the Pagan web.  The Wild Hunt has an excellent obituary, and Ár nDraíocht Féin (which Isaac founded in 1983) has an extensive bio on their site.

Instead of repeating or reposting what others have already said, I want to talk about my experience of Isaac.  I was privileged to meet him twice.  The first was at the 2004 CUUPS Convocation.  Isaac and Phaedra were the guests of honor; they led several workshops and coordinated the Ostara ritual.  Isaac was a joy to be around: he was both knowledgeable and an engaging speaker, and while his humor generated as many groans as laughs (he was terribly fond of puns) it made him seem all the more genuine.

What impressed me most was the way he and Phaedra led the ritual.  It flowed, smoothly and seamlessly, from beginning to end.  The energy flowed right along with the liturgy.  That made a huge impression on me.  I had already learned how to compose a good ritual (drawing heavily from Isaac’s works) – this showed me what first class priestwork looked like.  Isaac had talent and charisma, but mainly he had a lifetime’s worth of experience in Pagan, Druid, Wiccan and occult studies and practice.

My second encounter with Isaac was at last year’s House of Danu Gorsedd.  His cancer hadn’t been detected yet, but he was clearly in poor health.  He wasn’t moving too well, he tired easily, and most of his presentations were repeats.  Still, he was an engaging speaker around the dinner table and a strong advocate for building true Pagan community in the panel discussions.  And he shared that same silly sense of humor at the Eisteddfod.

Like most folks, though, my primary knowledge of Isaac comes from his books.  Rites of Worship (now republished as Neopagan Rites) is simply the best resource I’ve ever come across on leading rituals (and I’ve read most of what’s out there).  Like most of his books and most of his work, it is grounded in what we know of ancient beliefs and practices without attempting to be reconstructionist.  Isaac experimented with many religious and magical traditions throughout his life and he was quick to adapt what worked and discard what didn’t.

Like so many Pagan elders, Isaac never made much money.  He spent his years writing and teaching and practicing and organizing, work that has greatly benefitted benefitted our communities but that doesn’t pay very well. His cancer treatments were terribly expensive, and Phaedra has been left with massive bills. Please consider going to his web page and making a donation – I did.

Isaac, you were a pioneer in modern Paganism.  Our communities and our world are much better off because of the work you did and the lives you touched.  You left us much too soon, but we are thankful for the sixty years we had with you.  You have truly earned your place among the Honored Ancestors.  Enjoy your time of rest, until the Wheel turns and brings you into this world once again.

August 15, 2010 The Case For God
Recent Comments
0 | Leave a Comment
""...our society has fully embraced sociopathy as a virtue."This is the first time I have ..."
Kristin Sweeney There Are Four Lights
"I get your point. You might look into the past about eighty-five or ninety years ..."
Kyllein MacKellerann " Premonitions and Disturbances and I’m Not ..."
"My relatives think of love as unconditional surrender to their version of a monotheistic deity. ..."
Gordon Cooper A Pagan Theology of the Dead
"So much of what we're talking about with the Other side is conditional because our ..."
Brigid'sFlamekeeper A Pagan Theology of the Dead
Browse Our Archives
get the latest updates from
John Beckett
and the Patheos
Pagan
Channel
POPULAR AT PATHEOS Pagan
1

How Not To Be a Magical Hipster
Someone recently asked me, "Don't you get upset when someone doesn't know...
view all Pagan blogs
What Are Your Thoughts?leave a comment
Copyright 2008-2021, Patheos. All rights reserved.