To Fly By Night 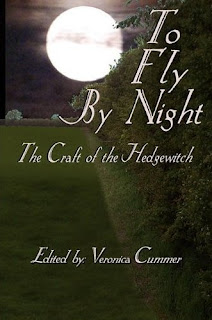 Come Fairies, take me out of this dull world, for I would ride with you upon the wind and dance upon the mountains like a flame!
William Butler Yeats, quoted by Beth Hansen-Buth

I don’t read many “how-to” books anymore. I have maybe a dozen on my shelf – most of them were bought long ago. They were helpful when I first read them and I still refer to them occasionally. But it’s rare when one of the many new how-to books covers material that wasn’t covered quite well by one of those dozen I’ve already got.

To Fly By Night –The Craft of the Hedgewitch is one of those rare exceptions. It’s not a “Wicca 101” book – if I put it on a college scale it’s probably 300-level material. It’s not stuff you want to try when you’re just starting out (if you’re new to Paganism, witchcraft and magic, start here).

What is hedgewitchery? Why and how should we practice it? To Fly By Night attempts to answer these questions, and does so with eighteen chapters by fifteen different writers. As you might imagine, with so many perspectives you get many very different answers – UUs should feel right at home!

Hedgewitchery is heavy on magic and shamanism and light on religion. Several of the chapters cover actual historical practices. Some delve into myths and legends, including an excellent look at the origins of the Wild Hunt. Still others describe how to “cross the hedge” and what you’re likely to encounter if you do. Poetry and recipes serve as interludes.

Not all the chapters are of equal value, and a couple left me scratching my head. But those are the exceptions – most are quite good.

Juniper, of Walking the Hedge blog and the garden section of Standing Stone and Garden Gate podcast, has the first chapter, titled “What the Heck is a Hedgewitch.” She says “hedgewitches have less interest in the heavily scripted and ceremonial aspects of … modern Paganism and witchcraft” and that “for the hedgewitch there is no separation between normal life and their magical one, for their normal life is magical.”

Sylva Markson says there are three reasons to cross the hedge: “the seeking of divine wisdom … interaction with the ancestors, the fae, and other spirits … and working in the Otherworld to manifest a material benefit in this world.”

Veronica Cummer (who also edited the book) details the importance of ecstatic dance, Jenne Micale describes the use of music to achieve altered states of consciousness, and Elige Stewart covers the classical instrument / tool of shamanism, the drum.

To varying degrees, all the writers point out that crossing the hedge is not without risk and should only be attempted for a serious reason. No one goes into the Otherworld and comes out unchanged. Stewart warns readers to have a specific purpose for journeying, saying “you shouldn’t treat the Otherworld as some mall that you can just go to and window shop when you have nothing better to do.” And Cummer says “it’s not enough to be just a bit crazy around the edges if you’re a hedgewitch; that crazy must always serve a purpose.”

I’ll never be a hedgewitch. I’m a Druid who loves ceremony and order. But even I occasionally have a need to cross the hedge, to part the veil, to journey to the Otherworld. I learned a lot from To Fly By Night and I’m already thinking of how to put that knowledge to good use…

June 4, 2011 Defining the Undefinable
Recent Comments
2 Comments | Leave a Comment
"I view the people who refuse to get vaccinated "just because" (as opposed to legitimate ..."
Brent Dannells Vaccines and Seat Belts: Playing the ..."
"Regarding the hazards - developing relationships with cowalkers/guides is highly recommended"
Amergin Ó Kai Paying Attention to Changes Between the ..."
"Nothing bothers me more than the friend who says they respect my choice in religion ..."
GaryK To Those Proselytizing Out Of Love: ..."
"I just got my first dose on the 6th, I took whatever one the state ..."
Nichole Cardillo Vaccines and Seat Belts: Playing the ..."
Browse Our Archives
get the latest from
John Beckett
Sign up for our newsletter
POPULAR AT PATHEOS Pagan
1