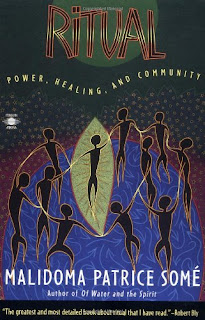 We Pagans like to call what we do “the old ways” and while the question of the direct lineage of our beliefs and practices is a matter of debate (a debate I find interesting but not particularly useful), there is no question we are inspired by our pre-Christian, mostly-European ancestors. But if you want to study the origins of religion you must go back farther than the Greeks, Norse and Celts. You must go back to tribal religions.

Fortunately, there are still some tribal religions in practice. Ritual: Power, Healing and Community by Malidoma Patrice Somè is about the practices of the Dagara tribe, who live in Burkina Faso in West Africa. It’s not a new book (first published in 1997) and it’s not even new to me. Cynthia loaned it to me early last year and I finally read it this week (it’s amazing what you can do when you minimize distractions).

The book is nominally about ritual, but really it’s about the structure of an indigenous society and the ceremonies that bind it together. Malidoma constantly contrasts indigenous culture with the “Machine culture” of the West, a culture that has made us slaves to time and to our possessions. What goes unstated are the core values behind those contrasting cultures.

In an indigenous society, the harmonious continuation of the tribe is the greatest good. Rituals insure the ancestors and spirits are pleased and that things are done the way they’re supposed to be done. Roles are narrowly defined for men and women; for children, adults and elders. To do something else, to “follow your bliss” is simply unthinkable. Your “bliss” is found only within the community.

And the pressure to conform is great. Malidoma says:

For a person to break the rule is not a sign of weakness or a momentary failure of the will. It is plain and irrevocable abdication or resignation from the group. A ritual must be done at this time to save the group from disintegrating as a result of this violent disconnection. To save an outcast … one must lose one’s power [and] you never will have it back. Therefore to try to save the outcast is to become an outcast yourself.

Some rituals – such as initiation – are so secretive Malidoma would not say anything about them. But he describes funeral rituals (which are public affairs) in great detail. You can deconstruct these rituals from a psychological or a magical point of view and there is much we can learn from them. But while they are clearly powerful, they are just as clearly intended for a different culture. Participating in them is like listening to singers singing beautifully, but in a different language. You can appreciate them and you can be moved by them, but you can’t completely understand them.

If we are to save ourselves from the curse of Machine culture, we should look to indigenous societies for help. But we should not expect to be able to perform their rituals and get the same results the tribes get. Indigenous rituals are powerful – Malidoma describes a mourning ritual done for Vietnam veterans that generated an amazing response – but even the most sensitive and enlightened of Westerners has a different worldview and lives in a different culture. Our rituals must be tailored to who we are and where we live here and now.

This is what we are doing as Pagans. We are attempting to adapt ancient concepts to our current predicament. Modern Paganism is our own indigenous religion.

Ritual: Power, Healing and Community is a fascinating look at an indigenous society and its religion. It’a fast read (112 pages) and well worth your time.