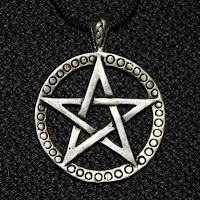 Teo Bishop at Patheos’ “Bishop in the Grove” relates an incident where his husband suffered from what they both agreed was a psychic attack. This despite the fact that both of them are rather skeptical about such things. The story is interesting and the reader comments are good – I encourage you to go read both, particularly if you’re not familiar with these things.

When I am asked how magic works I usually give a three-part answer. One part is psychological programming. This includes visualization, hypnosis, the power of story and myth, and good old fashioned political, religious, and athletic cheerleading. How it works can be mysterious at times, but clearly it does work, and there’s nothing supernatural about it.

A second part is intervention by spiritual entities. This can be a Druid praying to Morrigan or Lugh, an Evangelical Christian praying to Jesus, a Catholic praying to a saint, or a medieval sorcerer conjuring a demon to do his bidding. You can argue this is useless because there are no gods or saints or demons, but the concept is pretty straightforward – and there are countless stories of answered prayers in every tradition that includes petitional prayer.

The third part is the manipulation of unseen forces. We raise energy through drumming or dancing or chanting or singing. We perform spellwork that utilizes the properties of various objects and substances. We manipulate symbols and sigils. Maybe these unseen forces are natural phenomena we simply don’t understand or maybe they operate on a level we can’t understand. But regardless of what they are, those of us who practice magic have experienced them and their results.

If this is what magic is, how might a magical attack – a psychic attack – work? The classic image of a “black lodge” or a malevolent magician is a possibility, just not a very likely one. Most people I know who have the skill and influence to attack another person with magic would never dream of doing so, and the few I know of who would use magic so carelessly don’t have the skill and influence to pull it off. The alchemists were right – the most valuable transmutation isn’t turning lead into gold, it’s the refinement of the human soul.

But we all know people we hate to see coming. Maybe they give off a bad vibe, or maybe you’re always tired after they leave. Maybe they’re just hateful and mean-spirited in a mundane sense. Maybe they always want something and never give anything in return. Dealing with people like this can feel like you’re under attack and can leave you in real physical and emotional pain.

So how do we prevent these attacks? There are many techniques of shielding and warding. Dion Fortune’s Psychic Self-Defense (1930) is the classic reference on this subject. It is definitely “Mesopagan” – it mixes Pagan and magical concepts with Jewish and Christian mysticism. A more modern, Neopagan book is Kerr Cuhulain’s Magickal Self Defense: A Quantum Approach to Warding (2008). Both are good, but you have to understand their foundational assumptions for them to work for you.

My experience is that houses should be cleansed and warded on a regular basis. You clean the floors and change the furnace filters to get rid of built up dust and dirt. Cleansing a house gets rid of the built up psychic dust and negative energy. Wards are passive protection, but they’re like filters – they get dirty and need to be cleaned and recharged.

Keeping your home clean and safe is a good start, but what about for those times when you have to interact with difficult people? Shields can be helpful, as can amulets and other protective magic. Forewarned is forearmed – as you learn to recognize negative people and behaviors, you can take active steps to block and counter their attacks, whether those attacks are intentional or (usually) not.

There are witches and other Pagans who, citing karma or the Rule of Threes, will only work magic to block or reflect attacks from others. I’m not on that list. If I need to actively constrain or restrain someone, I will. Yes, such magic comes at a cost. So does anything of value.

In my experience, the best defense against psychic attack is a strong, steady, committed spiritual practice. Regular meditation, prayer, observations of the natural world, exercise, reading and study, journaling, participation in group practice and worship and other basic techniques of spiritual practice will help you grow strong, balanced and confident. It won’t make you immune to psychic vampires and other jerks, but it will help you recognize their bad behavior for what it is and put it in proper perspective.

I can hear the skeptics saying there’s nothing magical about that – that this falls under psychological programming, the non-supernatural form of magic. They might be right. The brain is a mysterious organ, and maybe there’s a materialist explanation for all this that’s just not evident yet.

But here’s what I do know. Cleansing and warding works. Defensive – and when necessary, offensive – magic works. Regular spiritual practice works for me and it’s worked for countless practitioners of every religion in every land in every age. Even though I passionately want to know how it works, I don’t have to know how. I just have to do it and it works.

Psychic attacks are real. The vast majority of them aren’t intentional acts by evil magic users, but they can still cause real emotional and physical suffering. The good news is that with a little effort they can be countered, and with dedicated practice they can be neutralized.

March 10, 2012 Initiation
Recent Comments
0 | Leave a Comment
Browse Our Archives
get the latest from
John Beckett
Sign up for our newsletter
POPULAR AT PATHEOS Pagan
1