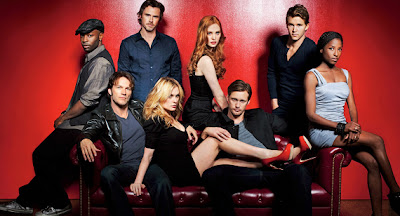 And their flesh shall nourish yours, their blood shall flow within you, for as the beetle nourishes the lark so shall human nourish vampire – from “True Blood”’s Vampire Bible

While most of my reading is in the realms of religion, science and history, I still do some reading for pleasure. And when I do, my genre of choice is Urban Fantasy, the blending of science fiction, fantasy and horror in a contemporary setting. There are a lot of good books in Urban Fantasy right now – and as with any genre, more than a few mediocre ones. My favorites are Laurell Hamilton’s Anita Blake and Merry Gentry series, Kim Harrison’s Rachel Morgan series, and Charlaine Harris’ Sookie Stackhouse series.

The Sookie Stackhouse books form the basis of HBO’s “True Blood” series, now in its fifth season. The stories have long departed from the books – what we’re seeing now is the creation of producer Alan Ball and the “True Blood” writers. And while there are multiple plot lines going, what’s grabbed my interest this season is the storyline on vampire religion.

We’ve seen religion in “True Blood” since Season One. The opening credits feature stock images of Southern religion, including an open water baptism, ecstatic scenes from a Pentecostal church, and a sign proclaiming “God hates fangs.” One of the early villains was Rev. Steve Newlin, a Joel Osteen clone whose Fellowship of the Sun was preparing to exterminate vampires. At the end of last season he was turned into a vampire, and now conveniently (and humorously) proclaims that God loves him just as he is. Vampirism has been a proxy for homosexuality, with many of the arguments for and against equal rights for vampires pulled straight out of the current debates on marriage equality.

This season, though, we’re starting to see the inner workings of the religion and government of the vampires themselves. In an interview with USA Today, Alan Ball said “Some of the things being said by some people during the Republican primary were so horrifying to me that I thought, ‘What if vampires wanted a theocracy? What would that look like?’ Whenever anybody thinks they know what God wants and wants to apply that to government, whether Americans or the Taliban, it’s kind of a terrifying thing.” 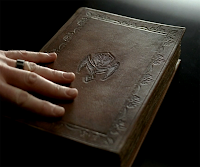 So far we’ve been told that the vampires have a bible, which is older than the Old Testament. It claims that God is a vampire and his first creation was Lilith, who became the mother of all vampires.

I’m reminded of the Greek philosopher Xenophanes of Colophon, who 2500 years ago said that if horses had gods they would look like horses.

This vampire bible says that humans are no more than food for vampires and should be treated as such. The sanguinistas are the vampire fundamentalists – they read this literally and want to rule over humans through terror. The mainstreamers in the vampire government (the “Authority”) reject this and want to peacefully coexist with humans.

The mainstreamers should be the good guys, but they torture and kill their enemies just like the “monsters” they oppose. The writers seem to be making the point that mixing religion with the pursuit of power inevitably perverts the religion and leads to abuses. And they’re right, but they’re presenting it rather clumsily. The Authority’s blood communion ritual is lifted straight from Catholicism (right down to denying communion to a suspected infidel), and the sanguinista’s prayer to Lilith is a rewriting of the Hail Mary.

Charlaine Harris does a good job of integrating Southern Protestant Christianity into her books. Like Kelly Taylor pointed out in her comment on my last post, religion in the South “soaks into even the weathered boards of the buildings.” It’s there, even when it’s not explicit. Sookie (who is the books’ sole narrator) doesn’t go around quoting scripture, but she prays occasionally (usually when she’s in trouble), goes to church occasionally, and occasionally worries about the impact the deaths she’s caused will have on the fate of her soul. She isn’t an exemplary Southern Christian, but she is typical.

The writers of “True Blood” lack Harris’ understanding and finesse, as they demonstrated in the first season when they played Softly and Tenderly at a funeral – Softly and Tenderly is an altar call song, not a funeral song. They don’t get Paganism either – last year a Wiccan character pronounced Samhain as “sam-a-hane.” True believers – in anything – are either naive or extremists, while religion is simply irrelevant to everyone else.

I’m still enjoying “True Blood” – it’s the only dramatic series I watch regularly (or much at all). But their attempt at creating a storyline around vampire religion leaves a lot to be desired.