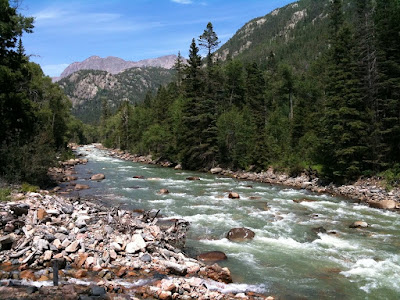 There are millions of Pagans in the world and thousands of them have some presence on the internet. But only a few write deep reflections of a theological nature. When one of these Pagans publishes something I’ve been thinking about, I consider it a coincidence. Two is a trend. Three is a message, and time for further meditation and thought on my part.

There have been three very good pieces this week on the nature of the gods.

British Druid Cat Treadwell comes close to my own thoughts and experience when she says:

As a Druid, the Gods of my land are a very mixed bunch. This isn’t eclectic Paganism – this is history. This isn’t picking names out of a book; my Goddess picked me (to my surprise).

Our Gods walk at our sides. Try to remember and say Hi. They may just have something to tell you.

What if in some distant future, one populated by a new batch of revisionist or reconstructionist Pagans, there is an idea that the celebrities we follow in the present day, the politicians we support, the cultural figures we align ourselves with, were deities?

I don’t want to be mistaken for a god.

And No Unsacred Place chief cat herder Alison Lilly responds to Teo with a long but worthwhile post that considers the fluid nature of identity:

Teo seems to suggest only two approaches to a theology of polytheism. There is hard polytheism, which believes that the gods have a definite sense of separate self-identity, and that humans would likewise retain such an identity even after death. And then there is the psychological approach, that sees the gods as archetypes, stories that we tell ourselves about ourselves and that, as powerful or moving as they may be, remain little more than make-believe, a fiction. Neither of these approaches seems all that satisfying to me.

I suggest a third alternative, an ecological polytheism. In this eco-theology, identity is responsive and creative, and divinity, like everything else in the sacred cosmos, is interwoven, connecting us all to all other aspects of being. We move through a world rife with gods and spirits, and a multitude of gods dwell within each of us.

It is good we are exploring the Big Questions of religion. Like other religious liberals (who are not the same as political liberals, although there is significant overlap), Pagans tend to emphasize practice over belief – what you do is more important than what you believe. Both are important, and so is the experience that comes out of practice and belief.

We begin by reflecting on our experiences. Cat experienced some folks with a comic book level understanding of the gods. Teo experienced the celebrity worship of our culture. Alison experienced the impermanence of Nature. All three thought about their experiences, made extrapolations and drew conclusions from them.

We all do this, all the time. What made this different was that Cat, Teo, and Alison took the time to organize and articulate their thoughts. Then they published them. In the 1950s they might have might have written a letter to a Pagan friend. In the 1980s their essays might have been printed in a newsletter or a magazine. Here in the 21st century they were published on the internet, instantly making them available to billions of people. Hundreds or thousands will read them and a few will respond.

This provides near-instant peer review. It’s not perfect – a writer has to find an audience, and if they put something really crappy out there it will simply be ignored. But some comments will cause the writer to reconsider some things and to strengthen his or her belief in other things. Some readers will become writers and spread the original ideas, expand them, or connect them to something similar they’ve seen somewhere else.

This is how we’re building contemporary Pagan theology.

Because most of us grew up in religions built on centuries-old sacred texts, long-established traditions, and the myth of receiving wisdom from on high, we overlook the fact that every religion that ever spread beyond a single tribe or village has gone through the same sausage-making process. The good ones never stop (or at least pick it up again periodically) much to the dismay of fundamentalists everywhere.

There will never be a Pagan version of the Council of Nicaea, and that’s a good thing. Paganism is a big umbrella that covers some very diverse beliefs and practices. The “internet peer review” process for Gardnerian Wicca will produce very different results than the same process for Heathenry or Hellenism. The ultimate output will not be a Unified Theory of Paganism, but a variety of stronger and more helpful Pagan traditions.

Not every post on a Pagan blog qualifies as a theological reflection – a simple look at the too-long list of labels on the left of this blog is proof of that. But some do. The comments, questions and follow-up posts are helping to develop and refine the beliefs and practices that will carry Paganism into future generations and future centuries.

It’s an exciting time to be a Pagan.

In the next post I’ll take part in the process and offer my own thoughts on Cat, Teo and Alison’s ideas.