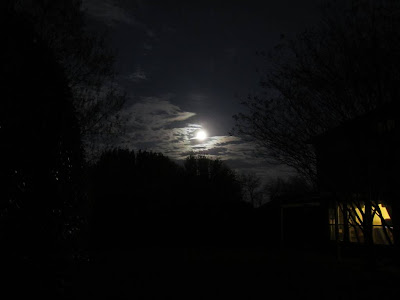 For someone who loves elaborate formal ritual as much as I do, my solitary rituals tend to be rather simple. Much of what works in a circle of 20 or 40 doesn’t scale down very well (and vice versa). And if it’s just me, a lot of formal ritual simply isn’t necessary any more. I’ve been casting circles for 19 years – I don’t have to circumnavigate three times, draw a circle on the floor, cleanse it with salt water and bless it with incense to know that a circle is there.

That doesn’t mean solitary rituals are unimportant. My four-times-a-day prayers are very simple, but they form the backbone of my spiritual practice.

For quite a while now, I’ve been feeling like I need to be performing some kind of Full Moon rituals – and I need to be doing them every month. Recently that urge has gotten stronger.

The first thing I had to do was to get past the “I’m too busy” excuse.

In an era of to-the-minute timing of routine astronomical events, it’s easy to forget that traditionally, the Full Moon is three nights, not just a point in time. To the naked eye the appearance of the Moon is virtually identical for the night before, night of, and night after the “official” Full Moon. Yes, I’m frequently very busy around the Full Moon, but it’s a rare month when I can’t carve out some time on one of those three nights. It just takes some planning.

So last night I went outside on a beautiful Autumn evening. I lit torches at the quarters and said prayers of invocation to Cernunnos and Danu, to Morrigan, and to Brighid, who I don’t talk to often but from whom I recently requested healing for a friend. I said more prayers of invocation for my ancestors of blood and ancestors of spirit, for the spirits of this place, and for the spirits of Nature.

I filled two glasses with red wine and poured one of them as a libation for those who I had just invited. Should I have poured more? I always wonder about that, and on at least one occasion I’ve poured a whole bottle. Pouring one glass was what felt right last night, so it’s what I did last night. Next time may be different.

Then I sat down in the West, facing East and the rising Moon, and sipped the other glass of wine. I had no script, no agenda, nothing I felt I needed to do other than honor and strengthen my relationships with the gods, ancestors and spirits.

As I held the glass, I noticed the play of the moonlight with the wine and with the glass. It was beautiful and intriguing. After I had drunk about half the glass, it occurred to me that a glass of red wine in the moonlight would make a very good scrying surface.

I’ve never had much success at scrying. But between the magical setting, the presence of the gods and the bit of alcohol, this seemed very promising. I stopped sipping and started gazing into the glass, relaxing my focus but remaining aware for whatever I might see.

I didn’t see anything – not with my physical eyes and not with my psychic eyes. But after just a few minutes, it was like someone turned up the volume on the gods, ancestors and spirits. I heard them, loud and clear. And so I listened. Intently.

After a few more minutes, I went back to sipping the wine. When it was gone and when everyone had said what they wanted to say, I got up, thanked those who were there, extinguished the torches and opened the circle.

Last night I honored the gods, ancestors and spirits by offering wine and by offering my undivided attention. Now I honor them by following through on what they asked me to do.

And that includes doing this – or something like it – again next month. The next “exact” Full Moon is October 29 at 2:49PM CDT. So the three nights of the Full Moon are Sunday 10/28, Monday 10/29, and Tuesday 10/30. My calendar says I’m open all three of those nights. I just have to make sure one of them stays open.

Blessed be the Full Moon!

September 30, 2012
In Search of Herne the Hunter
Next Post

October 2, 2012 Druids and Their Robes
Recent Comments
1 Comment | Leave a Comment
Browse Our Archives
get the latest from
John Beckett
Sign up for our newsletter
POPULAR AT PATHEOS Pagan
1