In Search of Herne the Hunter 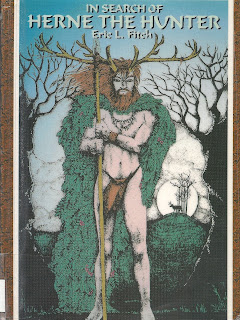 When I reviewed Hoofprints in the Wildwood – A Devotional for The Horned Lord I left open the question of whether the many horned gods of our ancestors are the same god with many names or different gods who do similar things in different places. But personally I’ve assumed they are different gods. Just from their appearance alone, it seems pretty clear to me that Pan and Cernunnos are very different beings.

The exception to that is Herne. I’ve always assumed (there’s that word again, and yes, I know what you get when you assume) Herne was just another name for Cernunnos. They’re both gods of the forest and of the hunt and they both come to us from what is now Britain. It’s always seemed reasonable that Cernunnos was the name given to the Celtic Lord of the Animals by the Romans and Herne was a different name used by the later Anglo-Saxons. But while I have a long relationship with Cernunnos, I have virtually no personal knowledge of Herne.

In an August essay, Patheos blogger Jason Mankey suggested reading In Search of Herne the Hunter by Eric Fitch. This is a small (190 pages) book published in 1994. It appears to be out of print, but I found a used copy at a very reasonable price on Amazon. As it turns out, Herne the Hunter has a legend of his own. Fitch does an excellent job of telling that legend, researching its likely origins, and explaining the connections to Cernunnos and Pan and the Saxon god Woden.

The first historical record of Herne comes from Shakespeare. In Act 4 Scene 4 of The Merry Wives of Windsor, Mistress Page says:

There is an old tale goes that Herne the hunter,
Sometime a keeper here in Windsor forest,
Doth all the winter-time, at still midnight,
Walk round about an oak, with great ragg’d horns;
And there he blasts the tree and takes the cattle
And makes milch-kine yield blood and shakes a chain
In a most hideous and dreadful manner:
You have heard of such a spirit, and well you know
The superstitious idle-headed eld
Received and did deliver to our age
This tale of Herne the hunter for a truth.

The tale of Herne the Hunter says that in the time of King Richard II (who reigned from 1377 – 1399), there was a gamekeeper named Herne whose skill in tracking and hunting was so great the King always wanted Herne to hunt with him. One day a stag turned and charged Richard, killed his horse and would have killed him, except that Herne jumped between them, protected the King and was fatally gored himself. The King offered a huge reward for anyone who could save Herne, but the other gamekeepers – who were jealous of Herne’s skill and favor with the King – were happy to see him die.

Then a stranger on a black horse appeared and offered to heal Herne. He cut the antlers and skull from the stag and tied them to Herne’s head. Herne recovered after a month but had lost all his skill with hunting and tracking. The King, having no further need of him, dismissed him. Herne rode off with the antlers on his head again and was next seen hanging from an oak tree in Home Park near Windsor Castle. But before his body could be taken down, it disappeared.

Herne the Hunter has reappeared numerous times, sometimes as a solitary ghost and sometimes as leader of the Wild Hunt. Seeing the Wild Hunt usually foretells disaster, either for the individual who sees it or for Britain at large. Unfortunately for those of us who would gladly take the risk, most of the sites historically connected to Herne are on the private grounds of the British Royal Family and not open to the public. Herne’s Oak, the tree from which the Hunter supposedly hanged himself, died and was cut down in 1796, but a replacement was planted in 1906. The last reported sighting of Herne by a guardsman was in 1976.


In Search of Herne the Hunter tells the legend in far greater detail, including variations on the Wild Hunt in the Saxon and Norse traditions. Fitch says there are four main parts to the story: the man with antlers and the connection to Cernunnos, ghostly appearances and the Wild Hunt, the theme of self-sacrifice and the connection to Woden, and the concept of the World Tree. Like any good myth, the tale of Herne the Hunter has deep roots and many meanings.

I highly recommend this book for anyone interested in any of the horned gods of our ancestors and of modern Pagans.

So, are Herne and Cernunnos different beings, or are they two names for different manifestations of the same god? I still don’t know.

I suppose I should ask them.