The Care and Use of an Altar

The Care and Use of an Altar January 4, 2013 John Beckett 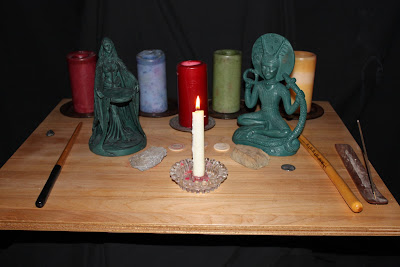 Fellow OBOD Druid Dana Driscoll has a nice piece on her blog on the hows and whys of creating altars. It’s quite good and has some interesting pictures of her own altars. Go read Dana’s piece and then come back. I don’t want to duplicate what she’s already said – I want to continue the discussion and address the question of what we actually do with the altars we build.

An altar is a mystical center: a Maen Log, an Omphalos, a World Tree. If it’s not a living thing (and I don’t think it is, although I may be looking at the question too literally), then it’s at least a connection to other living things: the gods and goddesses, the ancestors, and the spirits of Nature. The longer you maintain it and the more you use it, the stronger those connections get. Spiritual practice is a storehouse – if you fill it during ordinary times, you can draw from it in times of need. If you ignore it, there won’t be much there when trouble comes.

An altar is a place for prayer. If you have statues on your altar, this will come easily – one of the purposes of an idol is to give a deity a tangible form. Not because they need it, but because we do. The sacred images on the altar remind us of why we pray and what we should pray for. It is difficult for me to pray for trivial things when the Lord of the Animals is sitting right in front of me.

An altar is a place for meditation and contemplation. You put objects on your altar because they are meaningful to you. Sit or stand and gaze at them. Give them your full attention, not by hard concentration but by letting go of any thoughts not related to the images and what they represent. What do you see? What do you hear? Perhaps the gods are speaking to you. Perhaps it’s your higher or better self you’re hearing. What it is isn’t important. What’s important is that contemplation of the sacred – what’s sacred to you, not what someone else has told you is supposed to be sacred – will connect you to the Divine and to your True Will.

An altar should be tended. Perhaps you include seasonal items that are changed regularly. Perhaps you take it down every few months and give it a good cleaning. In her post, Dana talked about altars that evolve and grow as your practice evolves and grows. Don’t be afraid to take things off the altar. I have items on my bookshelves that were once on my altar – they’re no longer a focus of my practice, but they’re still meaningful enough that I want to keep them. There are other items that came off my altar and were returned to the elements. That doesn’t mean they weren’t important, just that their time had come and gone.

There are many ways to build an altar – choose what’s most meaningful to you. Then once you build it, use it.

January 6, 2013 Via Deorum
Recent Comments
4 Comments | Leave a Comment
Browse Our Archives
get the latest from
John Beckett
Sign up for our newsletter
POPULAR AT PATHEOS Pagan
1 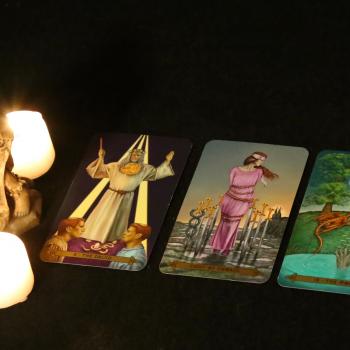 Pagan
How to Find a Good Reader
John Beckett