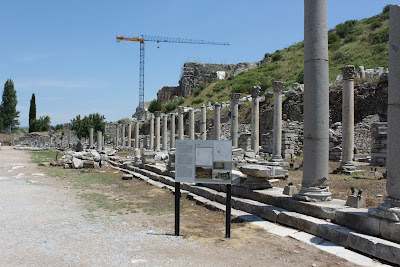 The wonderful folks of the Assembly of the Sacred Wheel now have the audio files from the two panel discussions at Between the Worlds available for download. They run about an hour and 40 minutes each: I put them on my phone and I’ve been listening to them while commuting. Get them and listen to them – they’re excellent.

I want to call your attention to one segment in the Friday morning panel “The Turning Of The Ages: What To Keep, What To Throw Away, And How To Decide.” At the 1 hour 18 minute mark, Sam Webster begins a four and a half minute talk that I’m titling “Via Deorum – The Way of The Gods.” Here’s an excerpt:

The thing that I am advocating for us all to do is to rebuild the cult of the gods. All of them. All of them we know. For every person who has a direct connection with a or many deities to rebuilt their cult, establish it again in the world, continue the process of making offerings, and create rites that introduce people to that deity. They’re real, they’re powerful, but we need to recreate their way.

As I listened live at the conference, I wrote down five notes.

“Rebuild the cult of the gods.” There are millions of people in our culture who are dissatisfied with mainstream religion. Some of them have been hurt by religious extremists. Some can’t believe what they’re told they have to believe. Some think the god of Abraham isn’t worthy of worship. Many of these folks would be Pagans if they knew polytheism and the gods of Nature were serious options.

I like Sam’s priority here. He doesn’t say rebuild temples or institutions, he says rebuilt the cults (“cult” being used here in the academic sense, not in the “crazy religious people you need to avoid” sense). Rebuild the ceremonies. Re-establish the sacrifices. Start worshiping the old goddesses and gods in the ways they used to be worshiped, and in the ways they tell us to worship them here and now, and good things will happen. Do what you can do in your back yard or living room. Gather with other like-minded folks. Talk to others who are doing the same things. Be there so that when the next person feels that same call you felt, they’ve got some place to go and somebody to talk to.

“Via Deorum – The Way of The Gods.” Sam said the Romans didn’t have word for religion until Christianity came along. Their practices were simply what they did. You can see a similar thing among the remaining tribal societies of Africa and South America – “religion” is what Christian or Muslim missionaries do. What we call their religion is simply part of who they are and what they do.

This is why I’ve urged polytheists and non-theists to work together and build a big tent of modern Paganism. If you’re helping pick up trash on the side of the road, it doesn’t matter if you think the gods are individual beings, aspects of The One, archetypes or metaphors. If we’re fighting for religious freedom or science education in schools or environmental protection, what you do is important. Why you do it isn’t.

“Who do you serve?” There are many gods and goddesses. Who do you know? Who do you work for and with? If you serve Hermes and I serve Cernunnos and we have a conversation, now each of us will know another powerful being. Perhaps some day I will need something from Hermes, or he will need something from me, and we’ll already be acquainted. Perhaps some day I’ll come across someone who feels called to Hermes and I’ll know to send her your way. Perhaps all that will happen is that each of us will learn and grow. In any case, we all benefit from learning from and worshiping with each other.

“Open architecture.” Sam said “if you don’t know that that means go find a local geek and they will explain it to you.” It means we’re transparent in our dealings with each other. It means we talk to each other and visit each other’s circles. It means we see what works well for other folks and then figure out how to adapt it into our practices.

For some deities there are excellent records of how they were worshiped in ancient times. For others there are none. But even when we’re rebuilding the cults of well-documented goddesses and gods, we have to remember that we live in a very different place and time than the ancient Greeks and Romans. And our gods and goddesses are living beings – they’ve changed over the past two thousand years. The more we share information, the more we talk with each other about what works well and what doesn’t, the better we’ll be able to rebuild the cults of the gods and to build the Paganism of the 21st century.

Via Deorum – The Way of The Gods. Let’s build it here and now.