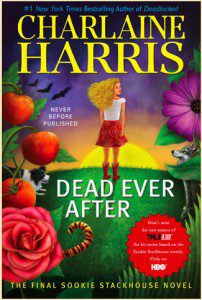 there are no spoilers in this review, although it discusses Dead Ever After in general terms

I’ve always loved supernatural fiction. From the classics of Stoker and Shelley to the early work of Anne Rice to the more recent urban fantasy, if a book had vampires and werewolves and magic in it I wanted to read it. Over the past few years my fiction-reading time has become rather limited, but I’ve always made time for new Sookie Stackhouse books.

Sookie Stackhouse is a telepathic waitress and the lead character in Charlaine Harris’ Southern Vampire series. The thirteenth and final book in the series, Dead Ever After, was released this week and I finished it last night. I hate to see another of my favorites come to an end (Kim Harrison’s Rachel Morgan series ended earlier this year after eleven books), but nothing lasts forever and it’s always better to end a series one book too soon rather than many books too late (thus the “early work” caveat on Anne Rice).

While the subject matter grabs my attention, it takes a lot more than vampires and witches to keep it. It takes realistic characters and interesting plots – stories you lose yourself in and characters you identify with. Unlike some fictional characters (Hermione Granger being the most obvious) I don’t see much of myself in Sookie. But I can relate to her feelings of growing up an outsider and trying to navigate through a society you don’t fully understand. It’s been fun seeing her learn to use her skills and going to places she never imagined existed, much less that she’d get to experience first-hand.

Getting the details right is important. Charlaine Harris is a daughter of the South and she gets the details right about Southern life: weather, food, music, and manners – the manners of small towns where everybody knows everybody else’s business. It seems like every few pages I had a flashback to growing up in Tennessee – sometimes pleasant flashbacks and sometimes not. I have to wonder if those places still exist. Atlanta wasn’t like that when I lived there in the late 1990s; I’ve been in Dallas – Fort Worth for eleven years and it isn’t either. Maybe it’s the size, but maybe things have just changed.

Harris gets the religion right too, the Protestant Christianity that in the words of my friend Kelly Taylor “soaks into even the weathered boards of the buildings.” Going to church is a part of the characters’ lives, even if Sookie doesn’t go very often. Sookie doesn’t want to become a vampire, in part because she loves the Sun but also because she’s not sure what impact that would have on her soul. She worries about the people she’s killed, but confidently believes “no one is beyond the grace of God.”

The books get religion right. True Blood, the HBO TV adaptation that has pretty much abandoned the books, does not.

Harris gave Wiccans fair treatment and did a good job of separating the religion of Wicca from the practice of witchcraft. But despite the presence of many varieties of fae and other creatures from myth, Sookie’s world is built on liberal Protestant Christianity.

Unlike the previous books Dead Ever After isn’t intended to reveal more about Sookie and show how she’s learning and growing. A lot of loose ends get tied up, questions are answered and motivations are revealed. Virtually every significant character from the previous books (those that are still living, anyway) makes an appearance, some playing key parts in the story and some just for cameos. The series is wrapping up, not just stopping.

When I heard Charlaine Harris was ending the series, I quickly came up with three possible ways it could end. After a little thought, I added a fourth possibility that I found extremely unpleasant. Of course, none of my ideas were right. The actual ending, while not what I would have chosen, was probably the most appropriate ending of all.

So farewell, Sookie Stackhouse. And thank you, Charlaine Harris, for thirteen enjoyable books. 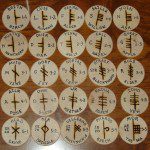 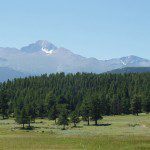 May 12, 2013 Nature Religion?
Recent Comments
5 Comments | Leave a Comment
"Good luck if you decide to. We always need more stories in the world. :)"
Trellia What Kind of Witch Do You ..."
"There ARE four lights."
Aelfrey There Are Four Lights
"Thank you for saying this. I think that may be a huge part of my ..."
Tiffany There Are Four Lights
"Well said.I also get very angry about this as I work with lab animals at ..."
Trellia There Are Four Lights
Browse Our Archives
get the latest updates from
John Beckett
and the Patheos
Pagan
Channel
POPULAR AT PATHEOS Pagan
1