Jailing Is Not Protecting

The Patheos Public Square has invited bloggers to explore the morality of drug use.  Here’s part of the question:

How should faith communities respond to the growing debate about recreational drug use, and the changing climate around treating drug use as a criminal matter? If the government loosens laws and reduces or abolishes penalties for personal drug use, is it respecting individual liberties, or failing to protect the health and wellbeing of its citizens?

I’m no political absolutist.  Individual liberties are important, but so is protecting the health and wellbeing of the public.  I support bans on public smoking.  I think anyone who rides a motorcycle without a helmet or who texts while driving is an idiot. There’s a balance to be struck between protecting people from themselves and allowing stupid people to reap the consequences of their stupidity.  I don’t have a simple answer when it comes to drug use… and quite frankly, people who have simple answers to complicated questions scare me, no matter what they advocate.

Drugs are illegal.  Alcohol isn’t.  Both can kill you if you abuse them; both have medicinal, recreational, and social uses that are clearly beneficial.  I don’t put much stock in consistency as a philosophical principle, but our radically different policies toward drugs vs. alcohol strikes me as odd.

Perhaps – perhaps – the benefits of drugs are too insignificant to outweigh the downside risks of widespread availability.  Perhaps marijuana has an acceptable benefit/risk ratio but other drugs should remain illegal.  Perhaps legalization and standardization of potency would lead people to assume drugs are less risky than they really are and cause them to harm themselves out of ignorance.

Perhaps.  This is a complex issue and I have no simple answers.

But here’s what I do know.  Over 300,000 people are in prison in the United States for drug-related offenses.  About a quarter of them were convicted of nothing more than possession.  Another 1.3 million are on probation or parole.  These people are disproportionally poor and disproportionally racial minorities.  Some are addicted to drugs they’d like to quit.  Their lives are difficult enough before subjecting them to prison.

The United States has the highest rate of incarceration in the world.  For a nation that prides itself on freedom, this is obscene.  It’s also expensive – almost $10 billion a year, just for the drug-related inmates.

Prison is for violent criminals and Wall Street swindlers, not for people who want to get high.

So yes, I’m in favor of drug legalization.  I have friends who like to smoke marijuana and I’d like for them to be able to do it above board.  While I’m perfectly satisfied with alcohol for social and relaxation purposes, I’d like to be able to experiment with certain entheogens and do it legally.

Mainly, though I’d like for ordinary folks to have the same opportunities as Bill Clinton and George W. Bush – to experiment with drugs without having their lives ruined by the prison industrial complex.

Should government protect the health and wellbeing of our citizens?  Should laws protect us from ourselves?  Sometimes, yes.

But we don’t protect the health and wellbeing of our citizens when we throw them in jail. 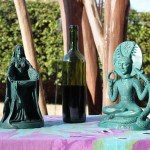 February 23, 2014
A Libation Without a Prayer is Just a Spilled Drink
Next Post 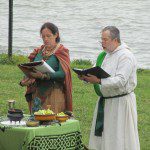 February 27, 2014 Nine Things I Think
Recent Comments
1 Comment | Leave a Comment
"Even Alito accepts that the Bill of Rights applies to the states (though I'm not ..."
John Beckett Post-Dobbs Witchcraft
"And what did I just see the moment I clicked away after reading this article?https://www.rollingstone.com/politics/politics-news/america-first-legal-trump-establishment-cause-church-state-1375776/Now ..."
Zzyzx Post-Dobbs Witchcraft
"If you want to hex, have at it. If you are doing instead of action ..."
kenofken Post-Dobbs Witchcraft
"I think I get your distinction and respect it. I also think that my use ..."
OrderInTheQuartz Post-Dobbs Witchcraft
Browse Our Archives
Related posts from John Beckett