The Future of Polytheism: Keeping the Gods at the Front

I don’t know what the future of polytheism looks like.  I have dreams of temples in every city, huge public rituals on holy days, and perhaps most importantly, a culture dominated by polytheist virtues and values.  These include honor, hospitality, reciprocity, the sovereignty of the land and of each individual, and a multi-generation approach to decision making.  But the needs of future polytheists may be very different from what I’m imagining – they may need something other than temples and large public rituals.

I do know what we need to do to insure that polytheism will thrive in the future:  keep our focus on our spiritual and devotional practice as polytheists.  And at the top of that list of practices is honoring the Gods and keeping Them at the front. 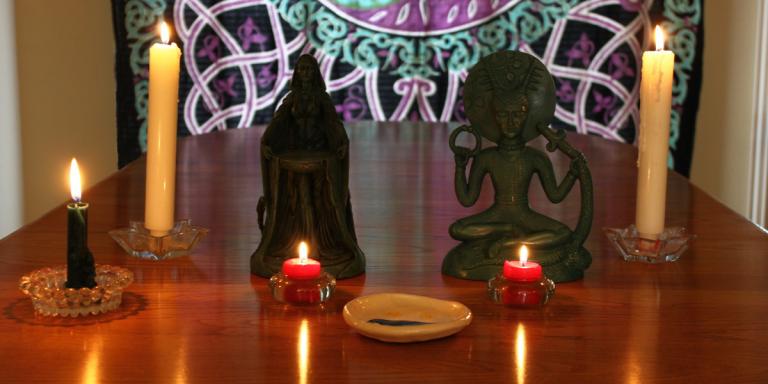 Good religion motivates us to live better lives.  It encourages us to build a better world here and now.  It inspires us to work and sacrifice for the benefit of future generations.  Unless you’re a cloistered monk or a mystic who spends so much time in the Otherworld you’re barely functional in this world, I would argue that if your religion doesn’t have a strong this-world component you’re doing it wrong.

There are three problems with this.

We cut ourselves off from our source.  Good religion motivates us to live better lives.  There’s a simple flow diagram in that sentence: 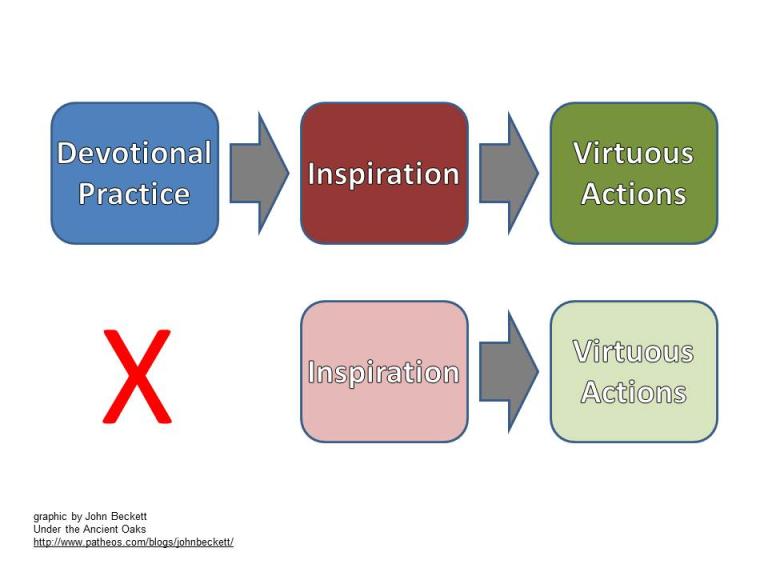 Now perhaps doing the right thing is motivation enough for doing the right thing.  Many of us have atheist friends who work alongside us to care for the Earth and to build a fair and just society.  But if your religious beliefs and practices inspired you to take up the great work of the world, they will also inspire you to keep working when things get hard.  One of keys to self-care is to continue to do the things that give you strength even when they aren’t convenient.

A strong, consistent polytheist practice maintains our connections to our Gods, to our ancestors, and to the spirits of the places where we live and work.  While we aren’t the primary concern of the Gods (though we may be a primary concern of our ancestors) if we are working on projects, causes, and practices that fall under Their purview They are likely to be helpful to us, subtly if not overtly.

When we keep the Gods at the front we maintain our connection to our source.

The one and only thing that we can regard as a doctrine universal to polytheism as such is the genuine existence of many Gods, and whatever we may, arguably and provisionally, infer from that single affirmation. Whatever does not follow from this single affirmation, however commonly held it should prove to be in this or that polytheistic tradition, cannot be said to be a property of polytheism as such.

As the header of this blog announces, my religion is more than polytheism.  Paganism, Druidry, and Unitarian Universalism are also part of my religious life, and I bring a polytheistic approach to all of them.  But the only thing I do that is truly polytheism is my devotion to the Gods.

I have no desire to argue over who is and isn’t a polytheist.  I support the right of self-identification. I also recognize the need to point out relevant distinctions, particularly around the meaning of “genuine existence” in Dr. Butler’s statement above.  But that’s another post for another time.

What I’m very interested in doing is pointing out that a practice with the Gods at the front is going to look and feel different from a practice that puts something else at the front, be that personal growth, political reform, social change, or anything else.  It will also produce different results.

All of us in the Big Tent of Paganism like to emphasize “orthopraxy not orthodoxy” – do the right things and don’t worry about believing the right things.  But while that’s a good approach when dealing with others (if you’re helping with roadside cleanup, I don’t care if you’re a Druid, an atheist, or a Baptist), it’s less than ideal when we apply it to ourselves.

The only people I know who are like this are devout, pious polytheists who keep the Gods at the front of their practices.  I’m there when I’m in ritual or in meditation, but not in ordinary times.  Yet.

When we don’t keep the Gods at the forefront of our practice, we put something else there.  That something else may be helpful or it may be a distraction, but whatever it is weakens our relationships with the Gods, lessens our understanding of Their values and virtues, and hinders us from developing a deep, intuitive polytheist identity.

The future of polytheism.  The future of polytheism will be many different traditions honoring many different Gods.  That’s not much of a prediction – we’ve already got that today.  Some of these traditions will flounder, while others will grow and prosper.  Those that do well will do all the things healthy organizations of all types do, but they’ll also keep the Gods at the front of their practice.

There is room in our many ethnic and regional traditions for people for whom the Gods are secondary to community, Nature, or their own better selves.  There is room for people who simply want to honor the Gods and live ordinary lives.  Our polytheist traditions are not all or nothing propositions and I hope they never will be.

But the future of polytheism will be built by those who keep the Gods at the front of their practice. 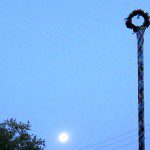 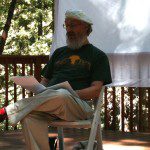 August 25, 2015 What I Learned From Isaac Bonewits
Recent Comments
0 | Leave a Comment
"No majority is behind any of this. The current Court is illegitimate, with Trump appointees ..."
Michel We Have Only the Rights the ..."
"I highly doubt the pagan community would survive well should a Dark Willow make an ..."
Nic Err Post-Dobbs Witchcraft
"Agreed, Dred Scott was the first of many.Minor v. Happersett (1875) denied women the vote.Plessy ..."
StarmanGhost We Have Only the Rights the ..."
"No one likes to be wrong and no one likes to feel like they have ..."
Nic Err Dealing With the Realities of a ..."
Browse Our Archives
Related posts from John Beckett