Sore Quadriceps and the Reality of Pagan Priesthood

What do quadriceps (the large muscles on the front of your thighs) and Pagan priesthood have to do with each other? Keep reading…

There is still a fair amount of confusion about what it means to be a priest in the modern Pagan world (or a priestess – in many traditions the gender of the person is irrelevant to the work they do and priest is becoming a gender-neutral term). There are those who insist being a priest is easy, glamourous, and filled with power and ecstasy.

There are moments of ecstasy, and there are times when a priest will experience tremendous power. But it’s not your power – the priest is merely the conduit for the power of the deity involved. If you’re skilled and blessed, you can contain the power, but you can’t control it, and you can never command it. If you see priesthood as glamourous I question your priorities, and priesthood is never, ever easy.

Last year I wrote a blog post on all the things Pagan priests are and do (an expanded version appeared in Issue #30 of Witches & Pagans magazine). The list is long, but there are three main themes: priests serve the Gods, priests mediate for the Gods, and priests serve their communities.

In addition to the usual work of writing and editing the ritual, there was also the matter of building the labyrinth. It’s made from tea candles in baby food jars. We still had the jars from 2011, but they had been sitting in a not-very-secure storage shed and they were dirty. It took 3-1/2 hours on a Saturday afternoon to get them cleaned up and ready to go. 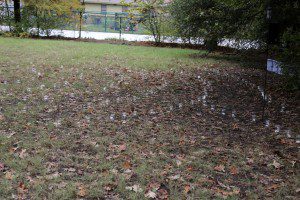 It rained pretty much all day Friday and into Saturday morning, but it dried up just enough to make the ground usable, otherwise we would have had to set it up inside the building. It would have worked, but outside is better. It took nine people over two hours to set all the jars and candles – that’s two hours of bending over and squatting down on the wet ground to get everything in the right place. Then there was setting the main ritual area indoors.

We did a walk-through of the ritual, grabbed some food, changed clothes, and got ready to greet guests. We had a very nice turnout. Samhain is usually well-attended, but a lot of folks were tied up taking their kids trick or treating. I counted 47 in the circle, and I’m happy with that.

The ritual went very well.  We honored the ancestors and the land spirits. We invited the Deities of the Occasion: Cernunnos, Brighid, and Morrigan, and we made offerings to Them. Then we walked the labyrinth. Cynthia, Wren, and I were stationed on the outside edge, in prayer to our Guests of Honor the entire time everyone else was in the labyrinth. We didn’t tell people what to expect – based on the conversation afterwards, the magic affected different people in different ways. 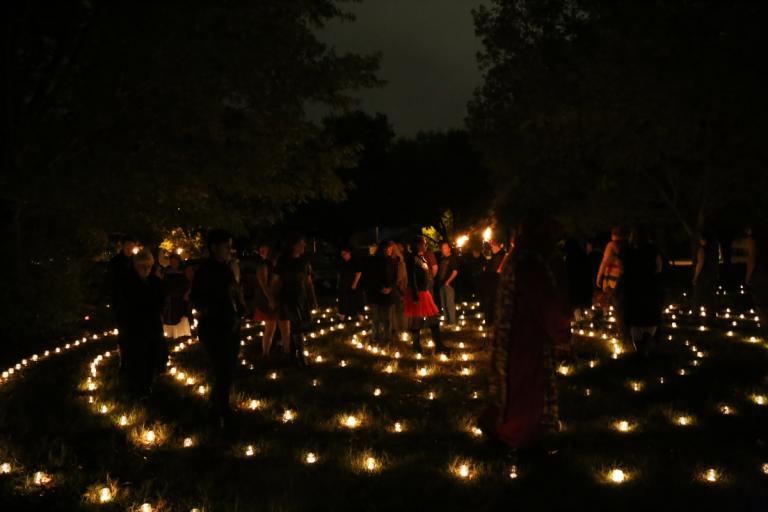 We closed the ritual in the usual way: a Simple Feast, thanking the Gods, spirits, and ancestors, and declaring the rite closed. Then it was time for a few announcements, followed by snacks, drinks, and a lot of conversation.

Two people missed most of the ritual – they were lighting tea candles before we started, then blowing them out after everyone had finished the labyrinth.

As the last of our guests began to leave, we started cleaning up. Chairs had to be re-stacked, altars taken down, and the kitchen cleaned. And all those 400 or so baby food jars? They had to be picked up. In the dark.

The church has a storage shed and we keep some of our ritual furniture (tables, torches, the baby food jars) there, but all the statues, chalices, candles, stereo equipment, and food had to be packed up and loaded in cars.

I started loading my car about 1:00 PM yesterday with all the stuff I needed to take to Denton for the ritual. By the time I finished unloading back at home after it was all over, it was almost 1:00 AM this morning. And the stereo hasn’t been reassembled, and I still haven’t cleaned the mud off my boots. 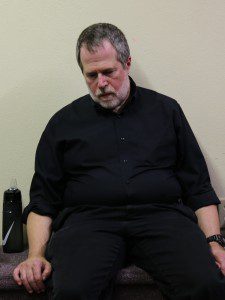 I’m not young and I’m not the amateur athlete I was 12-15 years ago, but I’m in generally good health. I do a lot of walking. Still, I was physically exhausted long before we left Denton last night. I slept fine, but my quadriceps are screaming that they’re not used to all that squatting down to place and pick up baby food jars. It’s going to take at least another day before I’m back to normal, even with large doses of ibuprofen. I haven’t talked with my fellow priests and other ritual leaders today, but I suspect they’re all feeling the effects of a very long day.

Why? Because it’s necessary. We helped 47 people have a religious experience last night. Who knows what will come of all those experiences, in the future if not right away. Maybe a first-timer starts exploring Paganism in depth. Maybe someone who has no interest in Gods or spirits realizes that honoring their ancestors is a good thing to do. Maybe a long-time Pagan is renewed and revived.

Maybe someone heard the call of one of our Guests of Honor and the ranks of the priesthood will be expanding soon.

I don’t know what’s going to happen. I trust that if I do the right things for the right reasons, good things will follow, eventually if not right away.

Even when doing the right things is a lot of work. 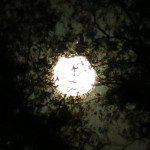 October 29, 2015
Secret Societies and the Impossibility of Perfect Vetting
Next Post 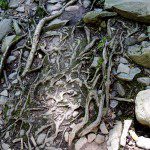