Three Hours in the Temple 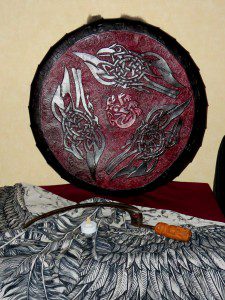 Most activities at Pantheacon are offerings to the Pagan community, given freely by teachers, elders, priests, and patrons. Every time you walk into a workshop, ritual, concert, or hospitality suite, someone is there who’s working: they’re giving so you can receive. Giving a presentation may require many hours of preparation, but it takes the same amount of time to give as to receive. Staffing an on-going facility, though, requires constant attention – you can’t have a hospitality suite unless someone is there every minute it’s open.

The same is true with a temple. Worshippers occasionally need support and guidance. While the vast majority of visitors are serious and reverent, a temple is a sacred space that must not be profaned – a priest needs to be present at all times. Plus the Temple of the Morrigan included numerous edged weapons – it would be irresponsible to leave them unattended.

To relieve some of the workload from their members (who were also staffing their hospitality suite, and leading rituals, and running workshops), the Coru Cathubodua priesthood asked a few friends and allies to take a turn as attendant priests in the Temple of the Morrigan. On Sunday morning, I was honored to spend three hours serving the Gods and our community as a temple priest. It was an amazing experience.

My shift began with a prayer cycle: prayers and offerings to all the Gods and spirits enshrined in the temple: to Queen Medb; to the Ancestors, Manannan, and Ériu; to Lugh, Fionn, and Cú Chulainn; to Nuada and Scathach; to Dagda, Brighid, and Goibniu; and to the Morrigan in all Her aspects. The primary purpose was to honor the Gods and spirits, but it also served to put me in the proper frame of mind. As I moved from altar to altar, Their presence became more and more tangible. 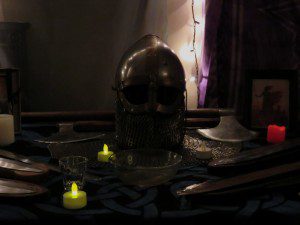 After that, my primary duty was to greet visitors to the temple and help them to whatever degree they wished. Everyone entering the temple was asked to remove their shoes and cleanse themselves from a bowl of consecrated water at the door. Prayer cards were available at each of the shrines – some people used them, while others said their own prayers. I made sure there was whiskey available for offerings at each altar (I put two new bottles into service during my shift) and emptied the offering bowls as they were filled (there’s a tree on the north side of the hotel that should be feeling really good for a long time!). Other than that, my job was to be present but unobtrusive.

Some people came in, made offerings, said a brief prayer, then left. Some made the rounds to all the altars. Many sat or knelt in front of the Shrine of the Great Queen in silent meditation and contemplation, some for as long as a half hour. Some were moved to tears – the Morrigan wasn’t just present, She was actively communicating with Her followers.

A few people came looking for a refuge from the loud and often discordant energies of the con. The temple was perhaps the most tightly warded room in the whole hotel – word got around it was a safe and clean space. I quickly re-learned what I’ve been taught about spiritual leadership – sometimes the only thing a priest can do is to simply be with someone as they’re suffering, to offer a comforting hand and be an unanxious presence while they work through what they have to work through.

About half the time the temple was empty (of visitors, anyway). Other than the few minutes required to tend to the offerings (and take the pictures shown here), I just sat in contemplation of the shrines and the Gods within them. They weren’t talking to me, but Their presence was clear and powerful and I felt honored, humbled, and strengthened to spend that time with Them. I didn’t notice it at the time, but when I think about it now, I’m shocked at how focused my concentration was. My mind didn’t wander to my presentation that afternoon, or what I was going to have for lunch, or what was going on back in Texas. I was in the presence of the Gods and ancestors, it was good, and it was enough.

It occurred to me that this is what it would be like to serve as a priest in a living, active temple – what our ancient ancestors did, and what we may do at some point in the future. The duties are relatively simple: tend to the mundane needs of the temple, honor and feed the Gods and spirits, serve as an example and reference for worshippers who may not know how to what they’re called to do, and provide care and guidance as requested. This is holy work and I’m honored to be able to do it, even if the temple only exists in the physical realm for a short time.

Unsurprisingly, time seemed to run differently inside the temple. When something was happening time seemed to slow down, as if to make sure everything that needed to be done was done properly. When I was alone in the temple, time seemed to fly – just the opposite of what usually happens when you’ve got no outside entertainment or stimulation. Sacred space indeed.

I am extremely thankful to the Coru for making this temple a reality, to their patrons who supported it financially, to the Gods, ancestors, and spirits who inhabited it, and to the worshippers and visitors who participated in its daily activities. It was an honor and a joy to serve as a priest of this temple.

It is my fervent desire that other groups will create similar temples at Pantheacon and other gatherings, so many others can have the experience of worshipping and communing in a physical temple, and of serving as a temple priest. 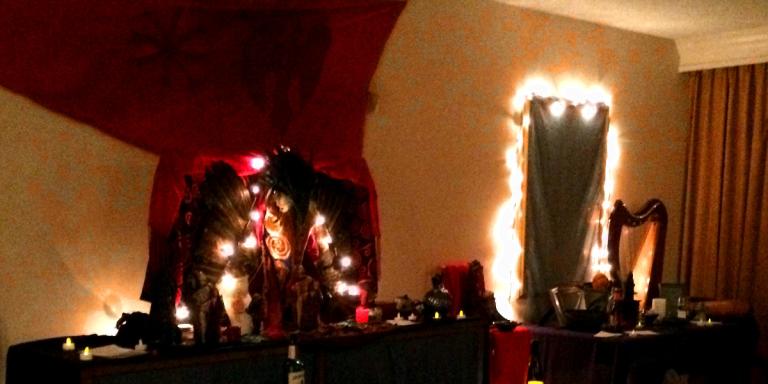 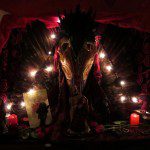 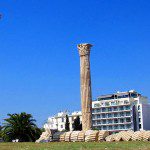