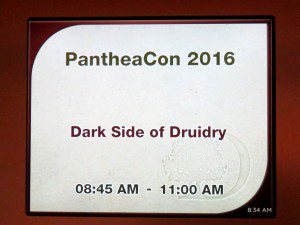 Pantheacon, the world’s largest indoor Pagan gathering, is held each year in San Jose, California over Presidents Day weekend. The buildup starts about the Tuesday before, as various travelers start making their way across the country, and in some cases, across the ocean.

After years of making excuses, I made my first trip to Pantheacon in 2014. This was my second trip. I booked a flight out Friday afternoon but then found myself wishing I had gone out Thursday instead. In retrospect, I’m not sure I could have lasted another day. I had a cold by the time I got there, and let’s face it – I’m not 22 anymore. But I still did almost everything I wanted to do, and I had a great time doing it.

I had a traveling companion this time: Tommy Elf of Upon a Pagan Path podcast. We flew out together and split a room (at the Fairfield – it’s quieter than the Doubletree and you don’t have to fight for a reservation) – that made an expensive trip a little more affordable. We got in, checked into the hotel, then went across the street to check into the convention. This time I also had to check into the Green Room, since I was presenting.

After that I started making my way around the hospitality suites, checking in with the people I wanted to catch up with. The Coru Cathubodua, ADF, OBOD, FoDLA, and Hexenfest were my first stops. Then off to the Patheos Pagan Bloggers dinner (thanks for dinner, Jason!). There were about four times more people at this dinner than at the one two years ago – sometimes I forget how much the channel has grown.

Then it was off to the opening of the Temple of the Morrigan. The structure of the temple was pretty much the same as 2014, but instead of 15 participants, this time there were 32. The Coru asked some allies to help with the temple work: I invoked Brighid, who is the unofficial patron of Denton CUUPS. I used a slight variation of an invocation we’ve used in our rituals, bringing a little bit of our group into the temple.

Perhaps it was my fatigue, or perhaps it was the larger group, but this opening ritual didn’t impact me as much as the one in 2014. But spiritual power can be subtle. When the ritual was over, nobody wanted to leave. I think I stayed about ten minutes – others were there far longer. The Gods, ancestors, and spirits were there and the temple was alive. I really, really wish more groups would set up dedicated temples and other sacred spaces at events like this. They cost a lot in both time and money, but they provide a calm and quiet escape from the loud chaos of the convention, and they demonstrate what good, Pagan, polytheist worship can be.

Saturday morning was my presentation “The Dark Side of Druidry.” As a first time presenter who isn’t a published author, I got an early slot and a small room. But it was filled standing room only, so I can’t complain (much). The cold weakened my voice – I probably didn’t have the volume for a larger room anyway. The responses were good and the questions were relevant, so I’m happy with it. Sometime in the next couple of weeks I’ll work my speaking outline into a blog post.

Then I was off to hear Kristoffer Hughes talk about the Gods of Wales. Kris explained the Welsh family tree as only he can do it: brilliantly and fabulously. His talk was alternately deeply spiritual and hilariously profane. I packed a little room – Kris packed the biggest single room in the Doubletree.

After that I met up with fellow OBOD Druid and anthropology professor Kimberly Kirner. I met Kim at the first House of Danu Gorsedd in 2009 and we’ve stayed in touch. I hadn’t seen her since the Pan Druid Retreat in 2014. We had lunch and discussed the ups and downs of retreats and conferences.

I decided to go back to my room and lay down before the next event. I ended up sleeping till 4:00. I missed Lora O’Brien’s workshop on Irish Spirituality and I missed the ADF ritual. But that gave me enough energy for the rest of the night. There were several things I wanted to do on Saturday evening, but Ivo Dominguez Jr. was leading a ritual to Cernunnos – that was where I needed to be.

Like every event I went to, this one was packed. The leaders did the best they could to adjust on the fly, but they really needed a double ballroom. The ritual still worked – it got people moving and feeling what it’s like to be alive and free.

Sharon Knight and Winter were playing in the adjacent ballroom, and there was some sound bleed-over. Just as Cernunnos was invoked, Sharon broke into “Fire in the Head.” I don’t know if anyone else noticed it, or if that song meant anything to them, but it struck me as incredibly appropriate.

The Cernunnos Ritual was relatively short, so I went next door and caught the rest of Sharon and Winter’s show. Later I picked up my copy of their new album “Portals,” which I’ll review after I’ve listened to it a few times.

The rest of the evening was spent in the Coru suite and the Temple of the Morrigan participating in a private ceremony. That story is not mine to tell, but it was amazing and beautiful.

Sunday morning I was back in the Temple, taking a turn as an attendant priest. That was a great experience that will get its own post in a few days. For now, I’ll just express the great honor I felt in being able to serve the Gods and our community in this way.

Sunday afternoon I presented “Bardic Magic” in the ADF suite. This discussed the magic of stories and songs, how they work, and how we can use them to create change in conformance with will. It also discussed how advertisers and politicians use bardic magic against us and how we can respond. I’ll be doing this presentation again at the OBOD Gulf Coast Gathering in March.

I spent most of the rest of the day back in the Coru suite, talking with anyone who seemed interested about deeper polytheist practice and alliances. While email and Facebook are great tools for staying in touch, there’s nothing like a face to face conversation. I came away with a good feeling for where I am, where our local group is, and where we need to go next.

Sunday night was a special devotional ritual for those who contributed to the Coru’s temple fundraiser. Several of the Coru priests had turned up sick (hopefully not from me – “con crud” seems to strike at random) – I filled in for some of the invocations.

I had a warning to expect something during this ritual. I was afraid it was going to be an uncontrolled ecstatic experience. That scared me. I trust the Coru implicitly, but I don’t know most of the other contributors and I was concerned about their reactions. I needn’t have worried – the Morrigan is nothing if not a skilled tactician. Her message was for me and me alone. I expressed my devotion, made my offering, and left to start thinking about how to accomplish this new task.

Monday was a long, long day. I woke up fairly early and hung out in the Doubletree lobby for a while, watching people pack up and load, and talking to people I know as they passed. I went up to say goodbye to the Coru just as they were starting to decommission the temple, and I participated in that. I was pleased – but not the least bit surprised – to see the devocations were every bit as reverent and powerful as the invocations. I helped tear down and put away – I’ve had lots of practice doing that after CUUPS circles.

There was time for one more workshop, so I went to hear Kristoffer Hughes talk about The Cauldron of Change. This was based on his book From the Cauldron Born. I had heard most of this before, but it was still fascinating. And the room was packed, again.

Tommy and I had booked a late afternoon flight back to Dallas. Due to snow in the East, our plane was over two hours late getting into San Jose. I didn’t get home till 2 AM. Thankfully, I have a job where can come in late when I have to, and I did.

I had a great time at Pantheacon. Most of the presentations are geared toward beginners, but there’s still plenty of depth – if you look for it. And there’s nothing like sitting on a hotel balcony, sipping wine, and discussing the fine points of your religion with some of the few people who truly understand your practices.

Even with a roommate, Pantheacon is an expensive trip for me. Whether I make it back in 2017 depends on finances, other trips, and the status of some major projects. I may be there next year, or I may not. But sooner or later, I will be back at Pantheacon. 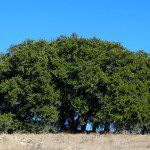 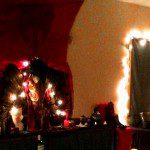 February 18, 2016 Three Hours in the Temple
Recent Comments
0 | Leave a Comment
"As a Nature-centered Pagan, I really enjoyed the Olivia Graves video. Picking up trash while ..."
Kristin Sweeney Building a Relationship with the Nature ..."
"In the yard of the house where I grew up grew (thanks to the previous ..."
Pitch313 Building a Relationship with the Nature ..."
"Ironically the USA which lauded itself as having thrown off oppressive monarchy, established democracy and ..."
Michel An American’s Thoughts on the Death ..."
"Vedic theologians say that Hinduism is in fact monotheist. All the deities are simply varying ..."
Michel Worshipping Deities From Different Cultures
Browse Our Archives
Related posts from John Beckett