After a journey of over three years, my first book The Path of Paganism is out. I got my author copies two weeks ago – I started getting Facebook messages from people who got their pre-ordered copies on Tuesday.

If you didn’t pre-order, it’s now in stock for immediate shipment from Amazon, Barnes & Noble, or direct from Llewellyn, the publisher. I hope Barnes & Noble will stock it in their stores, but I have no way of knowing if they will or won’t – if you see it, please let me know. I will have copies for sale at DFW Pagan Unity Fest on May 20 at Arlington UU Church, and at other events where I’m speaking.

I do not intend to turn Denton CUUPS circles into book selling sessions, but I’ll have copies with me – if you want to buy one, just ask. Plus our Beltane is going to be awesome this year – if you’ve ever thought about driving or flying to Denton for one of our rituals, this would be the one.

If you want an objective review, read this one by Claire Dixon at The Wild Hunt.

This is the story of The Path of Paganism. 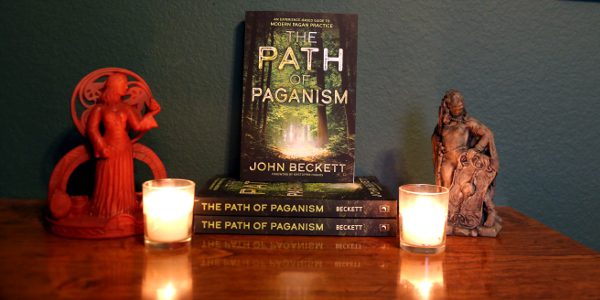 I always wanted to write a book.

I had dreams of being a rich best-selling novelist who worked from home. That dream was complicated by the fact that I can’t write fiction worth a damn. While I would have gotten decent if I had worked at it, I’m much better suited to writing non-fiction.

I started this blog in 2008 with no intention of doing anything other than working through some religious thoughts and sharing them with whoever wanted to read them. The blog has its own story – what’s important here is that I learned to write blog-length essays very well.

Former Patheos Pagan Channel Manager Christine Kraemer suggested that maybe my book was already in my blog. I could take The Four Centers of Paganism, go into more depth, add some rituals and exercises, and have a short but useful book.

All of a sudden the way was opened.

I never had much of a relationship with Brighid, but She’s been the unofficial patron of Pagans in Denton since long before I moved to Texas. And She is a Goddess of Inspiration. For whatever reason, She wanted this book written. What do you say when a Goddess asks you to do something? I said yes.

I put a matrix together with the Four Centers and how I wanted to explore each one. And that’s all I got done. 2014 was a difficult year for me, for many reasons that are no longer relevant.

In 2015 I threw out the matrix. There wasn’t a book in the Four Centers. But my own practice – individually and with Denton CUUPS – had solidified to the point where I had something I could teach… and that I felt a need to teach. When people asked me “where do I begin?” I had no good references for them.

Another a bit of wisdom I can’t remember where I heard says “if the book you need doesn’t exist, it’s your job to write it.”

The four sections of the book came first: foundations, practice, intermediate practice, and advanced practice. Chapters came next – the topics that needed to be covered in each section.

I wrote about 2000 words and then stopped.

Writing time is always a problem. I’ve got a blog to maintain, a CUUPS group to support, and I have a day job that pays the bills. How was I going to get all that done and write a book?

All I had to do was sift through seven years of blog posts and tease a book out of them. 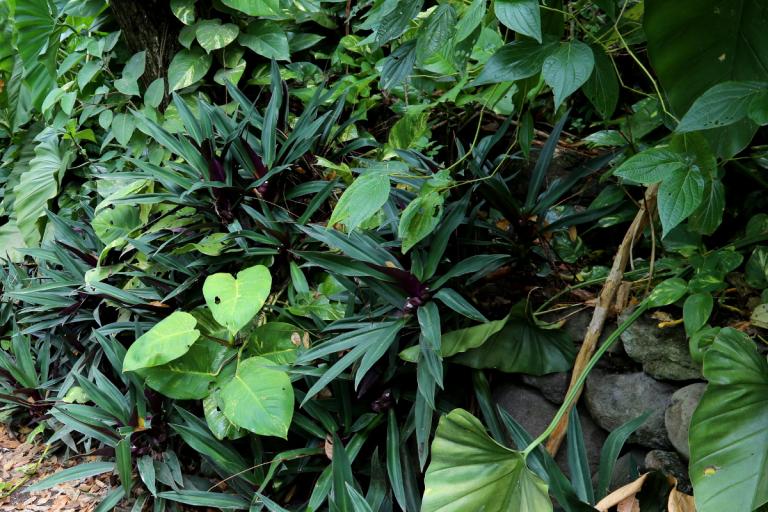 I got some good book-writing tips from Morpheus Ravenna, who wrote The Book of the Great Queen in 2014. Her most useful tip was to get Scrivener, a book writing program. It was far easier writing and editing in Scrivener than in Word.

I was aiming for a 90,000 word book, more or less. That would bring it in at about 300 pages – enough to feel like I had produced a substantive work, without making it so long no one would want to finish it. I needed to start cutting.

I also needed to blend and smooth a lot of material. If something is important to me, I tend to blog on it multiple times, often saying the same thing from a slightly different perspective. That works well with blogging – it doesn’t work at all for books. I had to take out repetitive material, as well as move sections from one chapter to another where they would fit better.

That’s a lot of work and it wasn’t moving along.

That message could be interpreted a couple of different ways and none of them were pleasant. Time to get to work. I put a schedule together to finish the book by the end of the year, and I committed to working the schedule. And I did.

Making progress on the book. I’ve done the blog dump, the organization, and the first edit.  Now I’m in the second edit, with the primary goal of giving the book one voice:  open, but unapologetically polytheist. – Personal journal, September 2, 2015

The biggest pain in all this? My grossly inconsistent style in referring to deities. Sometimes Gods, sometimes Gods and Goddesses, sometimes goddesses and gods, and in some of the early posts God/dess. And then the there’s the capitalization of pronouns – all that had to be manually changed to one consistent style.

A book is not finished when you’ve written the last word. Someone else needs to give it an honest look. I had four “alpha readers” – people I know and trust, but all chosen for slightly different reasons.

All four alpha readers had constructive comments, ranging from “this isn’t clear” to “you’re using this word wrong.” But their overall feedback was positive. I felt good about the finished book – this convinced me the “build a book” process had worked.

I asked Kristoffer Hughes to write a foreword – he enthusiastically said yes. It helps an unknown author to have an established author associated with a book, but I also wanted his feedback. Kris has been my biggest cheerleader from the moment I told him what I was doing.

Early on, both Jason and Kris told me I should send it to Llewellyn, who had published their books. After reading the final draft and before writing the foreword, Kris virtually insisted I try. I liked that idea – over the years Llewellyn has published some things I wish they hadn’t, but they’re the biggest player in the game, and they can get a book in more hands than anyone else in the Pagan world. I really didn’t think they’d want my book, but as Kris told me “what do you have to lose?”

So I contacted Elysia Gallo, Acquisitions Editor at Llewellyn. I had met Elysia briefly at Between the Worlds in 2012. She remembered me, and while she was non-committal, she agreed to look at the book. I sent it to her the Monday before Thanksgiving, 2015.

She liked it, and wanted to present it to the Llewellyn Acquisitions Committee. Because of holidays, conferences, and other projects, that didn’t happen till early March. But the committee liked it and offered me a contract. I got it on March 11, 2016.

It takes a long time to make a book. I’ve written about this during the process (both here and on Facebook) so I’ll summarize briefly.

Editing: Elysia sent me six pages of comments and recommended changes. 80% of them had me smacking my head and saying “that’s much better – why didn’t I write it like that in the first place?” 10% were “I’m OK either way and you’re the publishing professionals, so we’ll do it your way.” The final 10% were things where I said “no, it needs to stay the way I wrote it and here’s why.” Those things stayed the same. It was a very collaborative process and everyone’s first priority was to make the book the best it can be.

Title: My working title was Gather Under the Oaks. That connected it to my blog “Under the Ancient Oaks.” And I like the image of a Druid teaching under a tree. I thought it was a nice, poetic title, but I wasn’t thrilled with it. Llewellyn’s editors were concerned that didn’t tell someone who picked up the book in a store what it was about – they proposed The Path of Paganism. I’m good with it. They kept my subtitle An Experience-Based Guide to Modern Pagan Practice, which describes what the book is all about.

The purpose of a cover is to sell the book, but please – find something serious and dignified. I will scream and throw things if someone puts a cute cover on it. – E-mail to Elysia Gallo, March 31, 2016

I could not be happier with the cover. It says visually what the title Gather Under the Oaks tried to say verbally, only better. 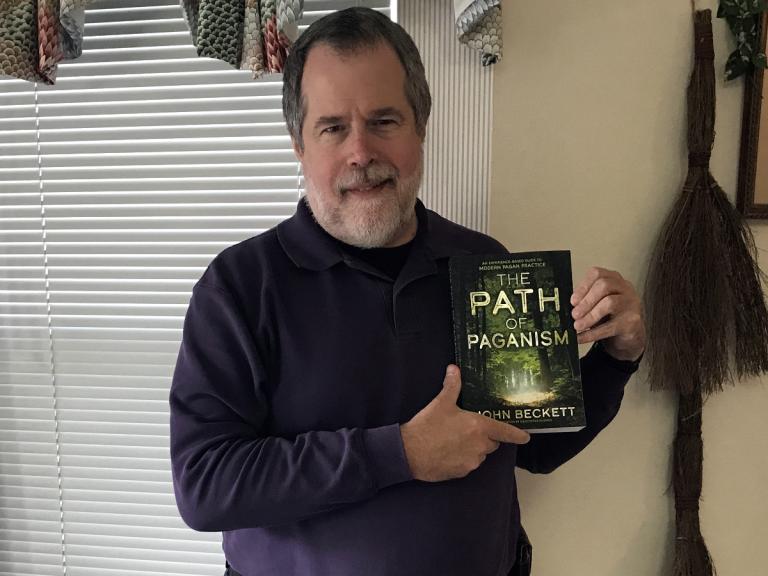 Someone on Facebook asked me how it felt to finally hold my book. At first, it was no big deal. I’ve been finished with it for so long I’ve been disconnected from it. But the more I thought about it, the better it felt.

I wrote a book. More than that, I wrote a book that didn’t exist. There is a dearth of 200-level Pagan books – this is one. There was nothing that provided a good introduction for Paganism as I practice it – now there is.

I hope all of you find it helpful, now and in the years to come. 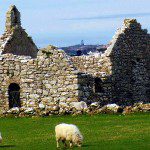 April 25, 2017
Why I Had To Make a Clean Break With Christianity
Next Post 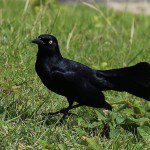