12 Days in Ireland and Wales

If you follow me on Facebook you know I’m back from a wonderful trip to Ireland and Wales. If you don’t, this is probably news to you. I got ahead on blog material before I left, so new posts have shown up on the regular schedule. And unlike the last time I tried that, most of you liked what I left… or at least that’s what the stats say.

This was both a vacation and a pilgrimage. I’ve got at least two weeks’ worth of religious and spiritual material to write about, and I’ll start that on Sunday. Today I’m trying to get reacclimated to US Central Time and ready to go back to my paying job (I’m writing this on Wednesday – I’ll be at work when this goes up).

So here are a few mundane travel notes and random impressions for your perusal and amusement.

More than any trip I’ve ever taken, this trip was dominated by the weather. The first was the nor’easter of early March. We flew American to Boston and then Aer Lingus to Dublin, and I was very worried about getting in and out of Boston. There were many delays and cancellations, but our flights ended up being almost on time.

Ireland had a blizzard the previous weekend that pretty much shut the country down, and there was still snow on the ground a week later. We had the usual cold and light rain you’d expect in Ireland in early March – it didn’t keep us from doing anything we wanted to do.

Until Wednesday in Limerick. We had hard, driving rain with 35 mph winds, and it lasted all day. That caused some local flooding. One of our taxi drivers said it was the worst he’d seen in 15 years. That was our day to visit Lough Gur – most of which is outside.

I have to wonder what our guide was saying to herself. I like to think it was “at least this group of Americans isn’t a bunch of wimps afraid of Irish weather.” But it might have been “these crazy Americans don’t have sense enough to get in out of a storm.” We didn’t get to do everything we had planned (things took longer than we expected), but we made it to the Gates of Tír na nÓg and to the largest stone circle in Ireland.

The weather in Wales was cold and windy. Kristoffer Hughes and his husband Ian gave us a warm welcome and showed us the Island of Anglesey. But Sunday morning we woke up to snow. It was enough to shut down several major roads in Britain, which cut into the attendance at the Anglesey Druid Order’s Spring Equinox ritual. But six of us were honored to stand in circle with them (and Cathy took pictures) and warm up in a pub afterwards.

The weather put the ferries behind schedule. We were supposed to leave Holyhead at 8:30 pm. Our ferry didn’t leave till after 11:00 and didn’t get in till well after 2:00 am. By the time they let foot passengers off and we called for a taxi, it was 4:00 am before we got to the hotel and into bed.

The weather is what it is, and weather magic is some of the most difficult magic to get right. We said prayers and made offerings for safe travels, and we gave thanks that we were able to power through bad weather and have a great time anyway.

I grew up hearing about Southern hospitality and experiencing it. At last year’s Mystic South, Cynthia Talbot gave a presentation on its Celtic roots. Once again I got to see that first hand.

I know the tourist industry is important to Ireland. But you can tell when someone is being nice because it’s their job and when they really want you to be happy with their home. Not everyone was friendly – there are gobshites in every country, to borrow a term from another of our taxi drivers. But almost everyone went out of their way to be helpful.

We heard “you’re all very welcome” many times, and we certainly felt welcome.

We can debate whether the Irish or the British do a better job with fish and chips. What is not open for debate is that both are far superior to anything served in America. None of these kid-sized factory-formed pieces of fish with skinny fries. You get one fillet from one fish, anywhere from moderately sized to huge, with thick cut fried potatoes. Why nobody in the US serves this is beyond me.

American bacon is a tasty bit of flavor. Irish bacon is a real piece of meat, like country ham except not as salty. Far better as a breakfast food… though probably not any healthier.

And as a non-coffee drinker, it was nice to have tea as a standard option instead of as a special order.

On the other hand, Cathy is screaming for Mexican food, and I’m ready to throw a couple of good steaks on the grill. On the whole I prefer American food, but what Ireland does well it does very well.

I made it a point to sample as many Irish whiskies as I could. I think I got up to 11 before I ran out of evenings. My favorites were the Jameson Black Barrel and the Teeling Single Grain. Both of them are available in the US. I also enjoyed the Powers Three Swallows, but it isn’t.

There are two distillery tours in Dublin: Jameson and Teeling. Like the Guinness Storehouse, the Jameson tour is a museum and a marketing opportunity. Teeling is a working distillery – that’s the one we did. You can see how whiskey is made, where it’s made.

You can also sample it, including the poitin – the Irish equivalent of white lightning. I don’t recommend it – there’s a reason why Irish and Scotch whiskey has to age in oak barrels for a minimum of three years. But it’s available if you want it, bottled up all nice and legal.

Just know that you can buy the three main varieties of Teeling in America for less than you’ll pay at the distillery (at least you can at Total Wine in Texas), and then you don’t have to carry it home in your luggage.

My good camera (a Canon 6D) stopped working after Lough Gur. It’s supposed to be water-resistant, and I kept it under my coat except to shoot, but apparently that was too much for it. Or maybe it’s something unrelated to the rain. The error message is rather vague, and the guys at the camera shop in Limerick couldn’t figure out anything. I’ll have to send it to the Canon service center and see what they can do for it.

You might think this is where I talk about concentrating on my surroundings instead of on taking pictures, but it’s not. I’ve figured out how to separate experiencing a place from documenting a place. And I still had my phone, and Cathy had her point & shoot, both of which take good pictures in good light.

Other than repair costs, the only major problem is that I didn’t get to shoot an Under the Ancient Oaks video with Kristoffer Hughes in Wales. Of course, the weather wasn’t exactly conducive to good video anyway.

I did decide this is the last big trip where I carry the 6D. It’s a great camera, but it’s too heavy, too fragile, and too important for the photography and video I do at home.

If you ever ask an Irish musician to play “Danny Boy” or “Wild Rover” you’re likely to get punched in the face. They’re good songs, but the musicians are sick of them. But go into Temple Bar and that’s what you’ll hear, because that’s what the tourists expect.

A good alternative is the Traditional Irish Music Pub Crawl. It meets in the Temple Bar area but quickly moves to other pubs where the guides play a series of Irish session music, and talk about the songs and instruments. If you want real Irish music and not tourist Irish music, I recommend it.

At the end of the night, they invite two people to sing or play for the tour. The first guy who volunteered played something on the guitar. He wasn’t bad, but he wasn’t great either.

And then our Samantha Angel Snow got up and sang “Siúil A Rún” – she impressed the crowd and the professionals. I have some very talented friends – Sami may be the best singer of the bunch.

The Cliffs of Moher

The Cliffs of Moher are a fascinating piece of natural beauty. Fortunately, we went here while my camera was still working. It was cold and windy, but at least there was no sideways sleet like when we were there in 2014. 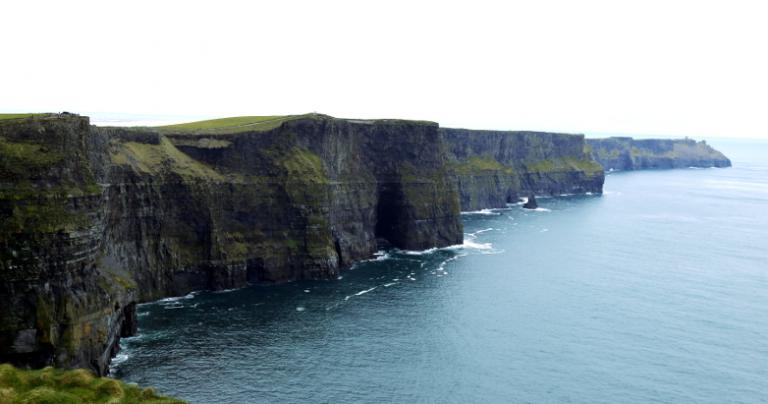 All of us on this trip prefer traveling in the early Spring when crowds and costs are lower. But the next time I go to Ireland, I want to go in weather warm enough to take a ferry to the Aran Islands, and to see the Cliffs from the sea

Cynthia Talbot has family in Ireland and has been there many times. She knows much of the country quite well – she planned most of this trip. But for the things she didn’t know, Vyviane Armstrong was invaluable. She found a very nice and very reasonable hotel for us in Limerick, and she knew there was lots we’d want to see at Lough Gur.

And when we were looking for one more Brigid’s Well in Kildare, we e-mailed Vyviane and she gave us directions to it two minutes later.

This is her business – if you want her services expect to pay a fair price for them. But she’s reasonable and helpful, especially to Pagans who are looking for stuff not on the standard tourist itinerary.

These are the mundane things on my mind as I try to return to the ordinary world. In the coming days I have an Otherworldly story from Fourknocks, a message from the ravens at Tara, a holy Pagan experience at a (nominally) Christian site, and much more.

It’s good to travel and I highly recommend it.

It’s also good to be home. 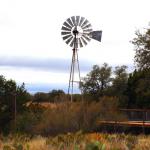 March 20, 2018
Developing Power in Paganism and Witchcraft
Next Post 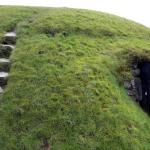 March 25, 2018 A Visit to Fourknocks – An Adventure in Four Parts
Recent Comments
0 | Leave a Comment
Browse Our Archives
Follow Us!

What Did You Expect From Tower...
John Beckett
Related posts from John Beckett

Pagan
What Did You Expect From Tower Time?
John Beckett 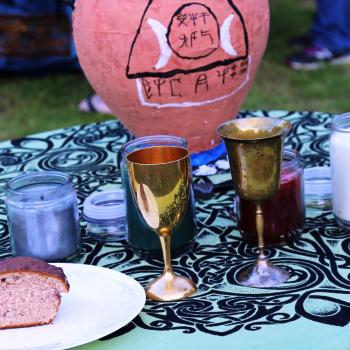 Pagan
What to Do When You Make a Mistake...
John Beckett
TRENDING AT PATHEOS Pagan

Pagan Gratitude: Rituals and Ideas
Gratitude seems like a simple concept, until you feel overwhelmed. Here are...

Finding Happiness and Joy During the Pandemic
I constantly emphasize doing what must be done. You don’t have to...
view all Pagan blogs
What Are Your Thoughts?leave a comment
Copyright 2008-2020, Patheos. All rights reserved.