Of all the post-ritual comments I’ve ever heard, this one from a first-time guest at last Saturday’s Denton CUUPS Beltane circle is possibly the strongest and most meaningful.

Now, I didn’t ask our guest to elaborate – I don’t know what he was expecting, or why he thought this ritual was more real than others he’s attended. It’s entirely possible his reasoning was rather different from what I’m writing here. But as unique as his words were, the message is one I heard from others at our Beltane ritual, and also from participants at the Morrigan Devotional ritual at Sacred Space this March and at Mystic South last July: this is deep, this is meaningful, this is real.

The theme of this year’s Beltane was “Pantheon” – all the Gods. At the beginning of the ritual, we said:

We are Unitarian Universalist Pagans. We welcome all who come in love and friendship, whether they worship many Gods, one God, or no Gods. But over the years we have developed our own Pantheon – a collection of deities who we know and serve. We have no ornate temples with domed roofs. But we do have sacred images of our Goddesses and Gods to help us see them and relate to them.

We set up shrines – grouped mostly by geography – to all the deities for whom we have statues or other physical representations. We encouraged people to browse the shrines before the ritual. After beginning with the traditional Maypole Dance, I led a procession back to our ritual area – the procession went directly by the shrines.

When I completed the procession and turned around, I noticed the line was backing up. People weren’t just walking past the shrines – they were stopping to look, and in at least a few cases, to pray. That was my first clue that the ritual was working better than I had expected.

After our usual invocations and offerings, our main event was rather simple. We introduced each of the enshrined deities by name – 35 in total, if I counted correctly – and made offerings to Them. We asked people “who calls to you?” If no one calls to you, we asked “who do you want to call to?” And then:

Come to the shrines. We have paper and pencils: write your prayers. Ask your questions, give your answers, speak the yearnings of your heart. When you are done, place your papers in the amphora. And when we are done, we will send the amphora to the Gods. 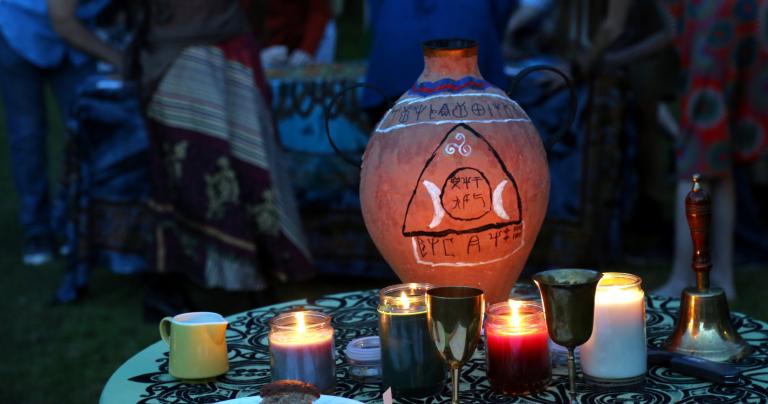 I had almost 9 minutes of background music queued up for this part of the ritual – I had to repeat the final song. As with the procession, people were taking this seriously and were in no hurry to finish. Not what I expected, but that’s a very good thing.

When everyone was done, we placed the amphora in the fire.

Goddesses and Gods of Denton CUUPS, Divine Ones from many places and many ages, Deities who we do not know but who are here just the same, we ask you to hear our prayers. As the fire consumes and transforms these papers, may our thoughts and words be carried to you. 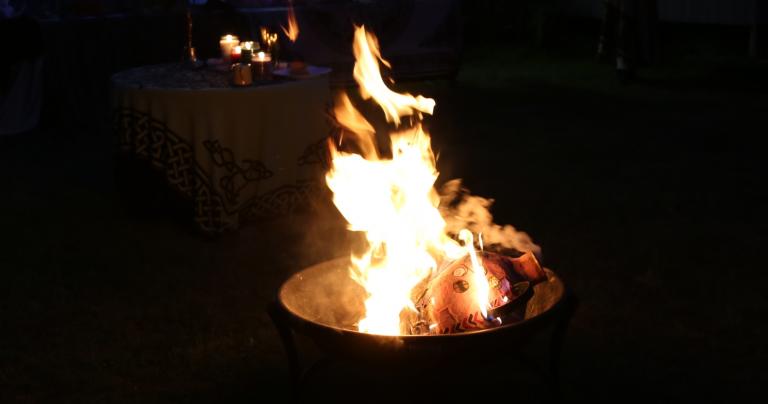 Based on the comments of the participants, They did.

This was not a particularly complicated ritual: there were no special preparations, no elaborate ritual plays, no arcane incantations. But there were elements that helped make it so powerful, and that’s what I’d like to discuss.

Walk into one of the beautiful medieval churches and you instantly realize you’re in a sacred space. I’m sure it was the same walking into the ancient Pagan temples. We don’t have those kind of buildings, and we’re not likely to have them any time soon. But with a little imagination and a little work, ordinary spaces can be made extraordinary.

For the Morrigan Devotional rituals, we turned hotel meetings rooms into temples. For this ritual, we turned the front yard of Denton UU into a shrine to the Many Gods. Statues aren’t cheap, but they aren’t prohibitively expensive, and many Pagans have one or two or twelve. We bought nothing for this ritual – we made the amphora from paper mache.

A central fire is important for religious reasons, but also for aesthetic ones. Fire bowls are perfect for this. If you’re indoors, burn rubbing alcohol in a cast iron cauldron or use a candle. In a hotel where open flames aren’t permitted? Use an electric candle.

Ritual leaders should dress like ritual leaders! This can be robes and Pagan jewelry, or fancy clothes, or even nice ordinary clothes. If you’re functioning as a priest, dress like a priest. Look like this is important to you, like you gave some thought to how you present yourself. It really does matter. 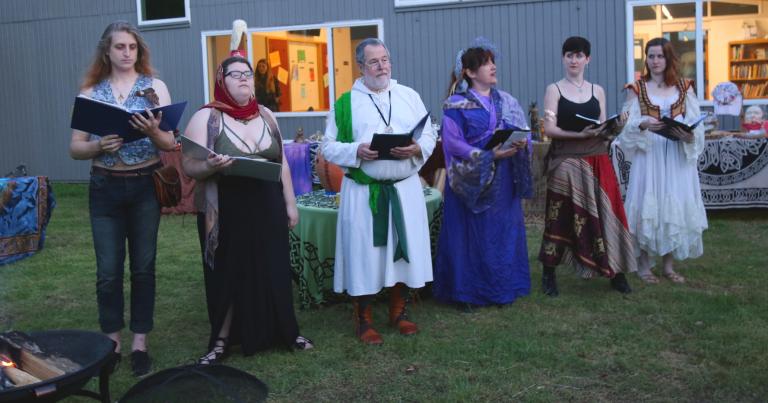 Paganism is not Puritanism with its plain meeting houses and expository sermons – it’s a religion of the senses. Make your space beautiful. Burn incense and play music at the appropriate times. Dress to impress. Atmosphere matters.

There’s a time for fun and frivolity – we had a great time laughing and dancing and falling on the ground during the Maypole. But there are also times that call for seriousness, and some of those call for reverence.

Even many long-time Pagans are unsure how to conduct themselves in a ritual. So they look at what others are doing, especially the leaders. If the leaders are reciting or reading their lines with respect in their voices, the participants will pick up on it. If the leaders are treating the statues as sacred representations of the Gods, so will the participants. Set the right atmosphere and people will intuitively follow.

So little is sacred in our ordinary world. Most people are hungry for something not-ordinary, something holy. Present them with something worthy of reverence and they’ll eagerly respond.

Sacred theater is powerful and holy

The most powerful myths of today are not told in churches or temples or groves – they’re told in movie theaters and on television screens. People are inspired and moved by The Lord of the Rings, Harry Potter, and Game of Thrones. Star Wars led to the beginnings of an actual religion. As much as some of us (me included) like to rant about “pop culture religion” the fact is that theater has always been an effective way of communicating deep and complex ideas and messages.

Read this now 10-year-old essay by UU minster Rev. Victoria Weinstein titled Serving Dionysus, where she talks about how what she learned in community theater helps her lead Sunday services:

The “secrets” of good liturgy are held mostly by the clergy, who rarely openly discuss with the laity how important technique and craft are to the successful “performance” of it. To refer to worship as a “performance” is to cheapen and defile its sanctity.

And yet, of course, liturgy is a performance of sorts.

Learn to project, so your voice can be heard by those on the other side of the circle – and by those who don’t hear so well. Learn to perform your lines, not just recite them. Practice movements and motions. Rehearse your rituals, so everyone knows what to do when. And when you’re not actively leading, pay close and reverent attention to those who are – model the behavior you want to encourage in the participants.

Pagan ritual should never degenerate into melodrama, but sacred theater has been a part of religion at least since the ancient Greeks. Make it a part of your rituals.

The Gods will speak if we will listen

All this atmosphere, reverence, and theater has a purpose: putting everyone in the right frame of mind to hear the Gods.

For all Their power and might, They rarely choose to present Themselves in a loud and boisterous manner. I do not know why this is, though I suspect the kind of people who are attracted to loud and boisterous aren’t well-suited for the work of the Gods. In any case, hearing Them usually requires listening with intent.

This need not and should not be complicated. For the Morrigan Devotional rituals we invited people to simply approach the altar and make an offering. For this ritual we asked them to write their prayers. The look on people’s faces as they participated made it clear communication was happening.

Perhaps I should say “the God are speaking – will we listen?” If you want people to experience the Gods in your ritual, make it easy for them to listen.

Relationships are the foundation

I am certain that the deities present at our ritual were not there because we commanded Them to appear. They came because They wanted to be there, and because people who know Them invited them to come.

We often think of deities as the God of This or the Goddess of That. Certainly the many Gods have their own areas of interest and responsibility. But more than that, Gods have people, and people have Gods. We approach our deities through relationships rather than through functions. Those relationships have persisted through generations of migration, across continents and across oceans.

And they continue to this day. If you would introduce the Gods to the people, first build a relationship based on honor and respect, on hospitality and reciprocity.

There is a yearning for depth

There is a tendency in Paganism to save the good stuff for private rituals. Some traditions are built on oath-bound material, or on the kind of intense work that few people can or want to do. I participate in some of those traditions, and there are things I do in private I will not do in public.

But that’s no reason dumb down our public rituals. The Gods are for everyone. While I encourage us all to read and study and learn, no special knowledge is required to pray or meditate or make offerings. Show people the Gods in all Their power and majesty – They’ll do the rest. 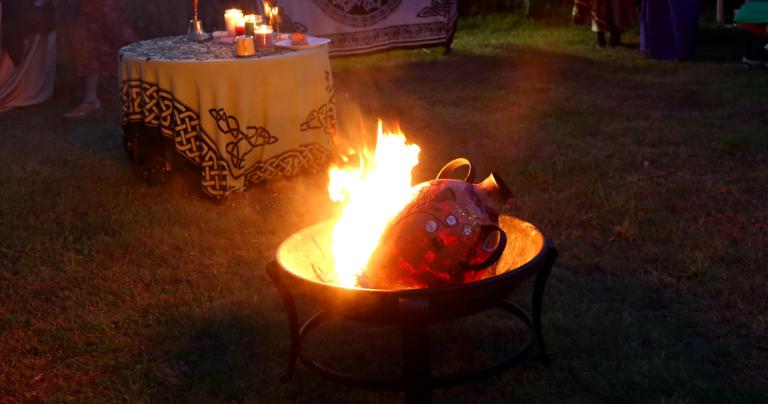 I coordinated this ritual, but it is not my creation. The theme of Pantheon was presented to me by several deities at once: “you, Druid – do this.” The rest was just me filling in the blanks.

In the days before the ritual, I told my fellow leaders “let’s make our Pantheon as beautiful as we can – not just statues on tables. Bring fabric, flowers, jewelry – anything to enhance the display of the images of our Gods.” And they did. The beauty of the shrines is the work of the people you see in these pictures, and some not pictured: Cynthia Talbot, Morgan Milburn, Gabrielle Milburn, Ruth Gibbs, Erik Kolderup, Heather Campbell, Sami Snow, Al Dent, Michi Harper, and Russell Griffin.

Special thanks to Cynthia Talbot, Erik Kolderup, and Gabrielle Milburn, who designed, made, and decorated the amphora.

And that’s another key to a powerful ritual – teamwork by dedicated leaders. 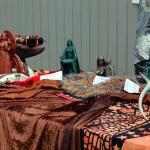 May 9, 2019
Moving From Raw Spiritual Experience to Religion
Next Post 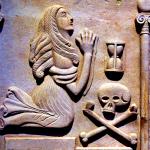 May 14, 2019 Sacrificing Women’s Lives on the Altar of Political Purity
Recent Comments
0 | Leave a Comment
Browse Our Archives
Related posts from John Beckett