Magical Tech, Pagan Publicity, and Some Questions For Fun

This is the fifth and final post in this round of Conversations Under the Oaks. These questions range from serious to whimsical, but they’re all worth answering.

I’ve seen several of your posts mentioning “borrowing tech” from other forms or styles of witchcraft. How do you go about finding these things? Is there some awesome Pagan Tech magazine out there or something?

I wish there was a Pagan Tech magazine – I’d be a permanent subscriber!

The short answer is that I read a lot, from a lot of different sources. And I bring an engineering approach to magic – I want to understand what’s happening in the spell and why it’s working, within my three-fold understanding of magic. If you understand what’s working and why, you can start to imagine other uses for those same operations.

It’s like with cooking. The first time you try something, follow the recipe to the letter. The second time, try a little more of this or a little less of that. Eventually you’re creating your own recipes.

Some things – particularly in ceremonial magic – have to be done exactly according to the recipe. Gordon White has compared grimoire spirit workings to nuclear launch codes – do it exactly right or it won’t work at all. That’s the danger in working with unfamiliar traditions – you can never be sure what’s technology and what’s culture that simply can’t be transferred to a different application.

My advice is to pick one magical tradition and learn it well. Then start looking at adjacent traditions – what’s the same and what’s different? With practice you can learn to spot the “magical tech” and then start thinking of new ways to use it.

How does one appropriately and effectively inform the broader Pagan community about an upcoming open circle or celebration? There’s got to be a way to appropriately publicize these events without being irritating or slipping over into outright advertising, but so far we’re just not doing a great job at it.

One of my greatest reliefs in Pagan leadership was when Denton CUUPS decided to create a new position for Communications and Technology, to handle all the publicity for our circles. It was probably the least favorite thing I did. But I did it for a lot of years – hopefully my ideas aren’t outdated yet.

The most basic and important way is to build your own e-mail list. Facebook is controlled by Facebook – they show your message to who they want to show it to, and they can shut you down any time they like. Own your own e-mail list. We used Yahoo Groups for years – we moved to MailChimp a while back. Don’t overload people – one announcement a month is probably enough. One a week is probably too much.

The second most important thing is to have your own standalone website. Not a Facebook page (although those are good too) but your own site with your own domain name – something you control. Use a website mainly for static info: your mission statement, by-laws, calendar for the year, contact info.

Use social media where you can. It’s good to have Facebook, Twitter, and Instagram accounts. You’ll have to build a following on each, but over time they can help. Post regularly, beyond event announcements – anything to build engagement.

If you can, post physical flyers for events. We have the UU church, two college campuses, and a variety of coffee shops and other locations that have old fashioned bulletin boards.

Be consistent. Remember this is a long game – people may see three posts or messages or flyers and not be able to come to your event, but then they see the fourth one and decide it’s time to come check you out.

If you had the power to make it so, which TV series never would have been canceled or come to an end? Firefly? The original Sabrina the Teenage Witch? Star Trek?

The challenge for TV series – and book series too – is to know when and how to end. Not everything is supposed to be General Hospital (which has been running for 56 years). We may love characters and worlds, but eventually their stories are done. Go too long and you jump the shark. Better to end too soon than too late.

I only remember bits and pieces of the original Star Trek in its first run, but I caught it in reruns in high school and quickly became obsessed with it. But even through my geekdom, I realized that it hit its peak somewhere in the middle of the second season. The third season simply wasn’t as good. While I wanted more, I wanted more of the best, not what the trajectory suggested a fourth season would become.

That’s not impossible. Buffy the Vampire Slayer had three great seasons, went seriously downhill in the fourth (“Hush” notwithstanding), then started recovering somewhere in the fifth. The sixth was great and the seventh was good. They knew it was time to end and they gave it a good, believable, satisfying ending.

All that said, there is only one answer to your question, and it’s your first suggestion: Firefly. It had a great concept, good writing, and good acting. But it only got a 2-hour pilot and 13 1-hour episodes, of which only 10 were shown before it was canceled. Joss Whedon (who also created Buffy) intended it to run for seven years. Firefly never got a chance to develop a wider audience on broadcast TV. If it had come along in our current era of streaming services, it almost certainly would have gotten a lot more.

If you could have a second house anywhere in the world, where would it be and why?

Part of me would like to have a house in the mountains somewhere: the Cascades (preferably in British Columbia, in case Trump gets re-elected), the Rockies (somewhere between Boulder and Rocky Mountain National Park), or in the Appalachians in my home state of Tennessee. I don’t ski or climb but I love to hike, and I think the mountains are the most beautiful place on Earth.

Another part would like to have a house in Ireland, in or near a decent sized city. Probably Galway. I love Dublin, but it’s too crowded for me to live there.

But I think if I could have a second house anywhere in the world, it would be on Anglesey, in Wales. It’s big enough to have everything you need, but it’s still relatively quiet. I could hang out with the Anglesey Druids, and there are 143 scheduled monuments to explore.

When I first visited Anglesey in 2014, I expected to feel a connection to the place – in ancient times it was an important gathering place for Druids. And I did… just not in the way I expected. What I heard wasn’t “welcome home.” It was “we’re glad you’re here – now go back to Texas and build what needs to be built there.”

I love traveling, but my work is here. Even if I had the resources (and I don’t) I can’t see me buying or even leasing a second house.

Even if it’s fun to think about. 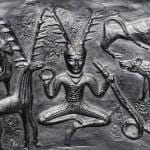 February 18, 2020 Foreshadowing the Druid – Pagan Signs From My Childhood
Recent Comments
0 | Leave a Comment
"Maybe with the right theme music, we could be "The Spirituality With No Name.""
Pitch313 Why I Still Call Myself Pagan
"As problematic as Disney can sometimes be, Frozen 2 had a saying that I just ..."
Zzyzx Tell Me What To Do
"Not that you asked ME, Dan--LOL--but, fwiw, the word "worship" sticks in my craw, and ..."
Laurie The Gods And Nature
"IMHO: Pagan/Paganism/Paganry has become like "Christianity"— not the fear-based religion of control, but a sort ..."
Kyllein MacKellerann Why I Still Call Myself Pagan
Browse Our Archives
Related posts from John Beckett