In Defense of the Celtic Cross

In Defense of the Celtic Cross January 26, 2021 John Beckett

As I often do when reading Tarot, my Divination For 2021 used the Celtic Cross layout. It’s a common spread frequently included in the “little white book” that comes with most decks. I don’t use it all the time, but I use it a lot, especially when I’m reading for other people.

Coincidentally – I think – some of my Tarot-reading friends expressed their dislike of the Celtic Cross. This Twitter thread includes comments from Thorn Mooney, Laura Tempest Zakroff, and Christopher Penczak. Those are three very skilled and experienced witches and readers – none of them like the Celtic Cross. I’ve seen other readers (who I won’t name) whose dislike degenerated into ridicule of people using it. (To be clear: Thorn, Tempest, and Penczak did no such thing – they simply said “I don’t like it” – and that’s a perfectly valid opinion.)

I’ve had good results from the Celtic Cross. And while I’m not an evangelist for it – or for any other spread, or divination method – I would hate to see people abandon it just because some don’t like it.

The weaknesses of the Celtic Cross

In the Twitter thread, Thorn Mooney linked to her 2018 blog post titled The Celtic Cross is Kind of Terrible. I encourage you to read Thorn’s post. It’s a good and reasonable critique, not a hit piece. Here’s a key quote:

Whatever the Celtic Cross is, it is most surely neither ancient nor Celtic. But even if it were, it would still be a crappy spread for beginners.

Like Thorn, I tried learning Tarot on my own by reading the little white book. Also like Thorn, I had little success with it – the fact that I was trying to use a 10-card spread had a lot to do with that.

I’ve written previously about How I Learned To Read Tarot. I had to take an in-person class twice before it finally stuck. If I ever taught a Tarot class, I would spend about six weeks just studying the cards. Then we’d practice with 1-card draws, 3-card spreads, and 5-card spreads. Only after all that would we get into larger spreads – and the Celtic Cross is only one of many such layouts.

But there’s still a place for the Celtic Cross in the toolbox of the Tarot reader.

I’m seeing more and more Tarot practitioners advising others to read intuitively. Don’t worry about “standard” meanings of the cards and don’t try to fit them into a formal layout. Just look at the cards and let the messages and meanings come to you.

I can do that now. I couldn’t do it when I started, or even after several years of practice.

Intuition is like any other talent – it’s not evenly distributed across the population (if you want to improve your intuition, read Mat Auryn’s excellent book Psychic Witch – and do the work he recommends). It’s not a stretch to say that many of the better Tarot readers are naturally intuitive. Unfortunately, many people who are naturally talented in a field tend to forget that what comes easily for them doesn’t come so easily for others.

For those of us who have to work at developing intuition, a structured layout helps narrow our focus in a reading. We’re not trying to intuit what a card means, we’re trying to intuit what it means in the context of the position where it falls. That narrows things down significantly, which improves accuracy and confidence.

Yes, you can do structured positions with a 3-card or 5-card spread, and that’s sufficient for most simple questions. But if you can’t get enough depth and clarity to answer your question and it’s not coming intuitively, you’re going to need more cards.

The Celtic Cross is too complicated for beginners and it’s not necessary for advanced readers. It’s very good for intermediate readers who are trying to become advanced readers, especially those who aren’t naturally intuitive.

Specific questions need specific answers. But many times, people consult the Tarot or other divinatory tools for more general guidance. We don’t need a yes-or-no answer – we need to understand what’s going on. We need a story.

The ten positions of the Celtic Cross provide the framework for a story: what’s going on, how did we get here, where are we trying to go, what are the major influences, and where will we end up if we continue on this path?

I don’t do a lot of public readings, but when I do, at least half my querents have vague, high-level questions. I won’t read without a question, but I can’t force people to be as specific as I’d prefer. Many times they don’t know what they need – they just know something is “off” and they’re looking for guidance. The combination of the imagery in the cards and the context of the spread help create a story that gives the querent context for what they’re experiencing.

This is especially true when, in the words of Captain Barbossa, you see the positions as “more what you’d call guidelines than actual rules.” The positions provide structure, but patterns and combinations provide depth – as does intuitive reading, when you can do it.

The Celtic Cross as I read it

There are many variations on the Celtic Cross – this is the one I use. It’s my blending of multiple sources, from little white books to “real” books to what I’ve picked up from other readers and what I’ve learned on my own. 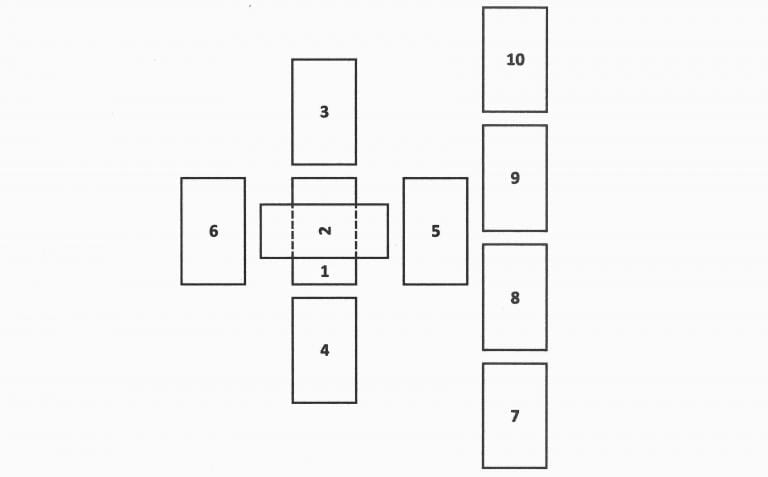 1. At the heart of the matter. The central issue of the question. Some readers select a “significator” in this position, while others do that and then draw for Position 1, giving an 11 card spread. I draw this as Card 1 of 10.

2. Crossing it for good or for ill. The major influence on the question. In a live reading I’ll place it over Card 1 (literally crossing it), but when I’m doing a photo shoot I’ll place it at the top, so you can see the first card clearly.

3. Your goal – what you seek. Not what you really want and not what you think you’re supposed to want, but what you’re going after right now.

4. In the far past. How did you get here? What happened in the past that brought you to this situation?

5. What is passing. What has been influential in recent times but is now going away, perhaps gradually or perhaps suddenly?

6. What is coming. What’s new that you should be looking out for.

7. You as you see yourself. How do you fit into this story? Is that an accurate assessment?

8. The environment in which we work. The wider context of the situation, especially things like politics, cultural trends, and natural phenomena. Many times this is the most informative card in the entire spread.

9. Your hopes and fears. What are you afraid of? What’s holding you back? What are you hoping will happen, and are those hopes realistic?

10. The final outcome. If you continue following the narrative as described by the first nine cards, this is where you’ll end up. Oftentimes this card doesn’t show a definitive place or condition so much as it tells you what things will look and feel like when you get there. As always, if you don’t like what the cards tell you, take action to change the story.

The cards in their positions are the beginning of the reading, not the end.

Going into depth on how I read Tarot would require far more than a blog post. And just because I read this way doesn’t mean it’s the best way for you to read. But once all ten cards are on the table, there are things I’m looking for.

How many Major Arcana cards are in the spread? How many of each suit? Are there multiples of a particular number? The more occurrences, the stronger that particular influence.

What cards seem to be related to each other, either to amplify their message or to moderate it?

Perhaps most importantly, what stands out in the cards themselves? Forget the “standard” meanings – what is this card trying to tell you right here right now? In my Divination For 2021, what stood out with The High Priestess was the cauldron. In that reading, the figure isn’t a priestess so much as she’s a witch – a magic user. In the Ten of Swords, it was the narrow band of sunlight in between the horizon and the dark clouds. Yes, things are going to be bad. But they won’t stay bad forever.

Sometimes one card just doesn’t fit with the rest of the cards, or with the narrative they create. When this happens, I will usually draw three more cards on top of it, to try to clarify the situation. Sometimes this provides clarity – other times I’m just as befuddled as I was to start with. Divination is an inexact science – it doesn’t always provide the answers we want.

Choose the right tool for the job

The Celtic Cross isn’t the “best” Tarot spread or the “most powerful” or “most ancient” or anything of the sort. It’s not for everyone.

It’s not a good spread for beginners. If you’re just starting out, concentrate on studying the cards and on answering simple questions with a few cards. Remember that you only get better with practice.

It’s often unnecessary for highly intuitive readers. If you don’t need it, don’t bother with it.

But for me, the Celtic Cross provided the structure I needed to get confident doing deeper readings, especially readings for other people. And it continues to provide good results in high level readings.

So I’m going to keep using it.

January 28, 2021 Denton CUUPS Online Imbolc Ritual: January 30
Recent Comments
0 | Leave a Comment
"Okay, the Romans conquered the known world but were scared silly of the dead (as ..."
Kyllein MacKellerann " Must We Speak No Ill of ..."
"Long-time lurker here... and I'd like to thank you, John, for discussing this subject. I've ..."
Owl in the Willow Setting Expectations for Spiritual Experiences
"Like with the eradication of a disease, I was quite happy with RL's death. Because ..."
JenniWest Rush Limbaugh is Dead and My ..."
"Bravo, John . . . good to see this 'rational' approach to dreams spelt out ..."
Carla Jean Interpreting Dreams, and Why I (Probably) ..."
Browse Our Archives
get the latest from
John Beckett
Sign up for our newsletter
POPULAR AT PATHEOS Pagan
1