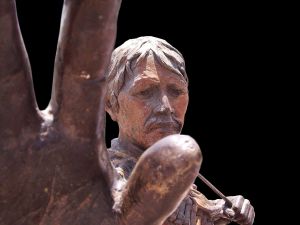 It is my firm conviction that the number one reason people are unhappy in life is because they refuse to believe that when they were kids their parents either flat-out didn’t love them, or loved them in a way that was so deeply tweaked it amounted to the same thing as not loving them.

It’s also my belief that the reason people refuse to accept the truth that when they were kids their parents treated them awfully is grounded in the fact that as very young children they instinctively grasped how terribly vulnerable they were made by the fact that their parents didn’t love them.

We spend the first years of our lives utterly dependent upon our parents for virtually everything we need to survive. If they don’t choose to give us what we need, we perish. I think that’s a basic fact of life that all humans understand pretty much right out of the gate.

And so children born to crappy parents do virtually the only thing they can do, which is to immediately, absolutely and without question convince themselves that, despite all the evidence to the contrary, their parents really are good, caring people who really do love them.

Having parents who really do love you = an outstanding chance of you surviving.

Having parents who obviously don’t love you = you probably won’t make it.

That’s not much of a choice, is it? And so most (and I would even argue all) children “decide” that, come hell or high water, their parents really do love them. They cling to that conviction, despite all the information they’re getting to the contrary. In the choice between what is true and what for them really, really needs to be true, they inevitably choose the latter. They have to. Their survival depends upon it.

And so children born into unhappy families begin to build their lives upon a lie.

And as surely as one day follows the next, children who are forced to build their lives upon a truth they can’t possibly face turn into adults whose lives are built upon a truth they can’t possibly face. And so as adults people who had unhappy childhoods continue their life-long suffering: they’re angry; they’re forever imagining themselves victims; they’re easily upset; their relationships don’t work.

In short, they have no idea who they are. They don’t know who they are, because the core truth of who they are was lost in the lie they had to live — which is to say, very often, in the person they were essentially forced to become in order to as effectively as possible deal with the threatening dynamics of their dysfunctional family life.

They either toss their parents off their shoulders, or they continue to sink with their parents strapped to their back. That’s the choice waiting to be made by every adult who was raised in a psychologically unhealthy family.

And what such people almost always choose is to continue to go down with their parents strapped to their back. And they make that “choice” for a perfectly understandable reason: it’s still in their mind — it’s still in their heart; it still defines the psychological paradigm of the only life they’ve ever known — that rejecting their parents means they themselves must be rejected. They’re continuing to operate within the context of their initial, original paradigm — the one that says their parents, to whom they are very close, dearly, and beneath it all, love them. And they are paying a very dear price for continuing to insist that lie is true.

If you are unhappy in life — if no matter what you do, say, think, or believe, you’re still dogged by the feeling that something fundamental just isn’t right with you or your life –then do yourself a favor, and give some thought to the idea that you have or had Genuinely Lousy Parents.

That maybe the reason you’re so burdened in life is that you’re carrying around weight that never should have been yours in the first place.

If you’re regularly dogged by a sense of unhappiness or anxiety — if you’re forever attending by what psychologists call “free-floating anxiety” — just try on the thought that your parents were pretty awful people who were in no way emotionally or psychologically prepared to have children.

Go ahead. Give it a shot. In the privacy of your own mind, really reject your parents. Scream at them. Blame them. See them for the sorry, selfish, self-obsssed dysfunctionals they were.

Banish them from your heart.

Walk away from them.

Doing that will not kill you.

I promise it won’t.

When Jesus said that the truth will set you free, he wasn’t kidding.

May 21, 2008 My Point: Reject EVERYTHING, So God Can Arrive
Recent Comments
182 Comments | Leave a Comment
"FOR THE READER'S BENEFIT & EDIFICATION:To see https://www.monergism.com/topics/hell The Biblical information therein refutes the cultists ..."
Thomas Dickensheets Proof that believing in hell is ..."
"you quote from an apocryphal story which is not part of God's Word inserted into ..."
Gum Boocho Waiting for Bob Jones’s huge gay ..."
"The story you refer to, at the start of John 8, is not a part ..."
Gum Boocho Waiting for Bob Jones’s huge gay ..."
"There is a huge point to the prodigal son story that Jesus told that is ..."
Jesse Baker Dude: Being a Christian doesn’t mean ..."
Browse Our Archives
get the latest updates from
John Shore
and the Patheos
Progressive Christian
Channel
POPULAR AT PATHEOS Progressive Christian
1

Jan. 17 Flashback: The Boy Who...
slacktivist
Books by This Author Books by John Shore