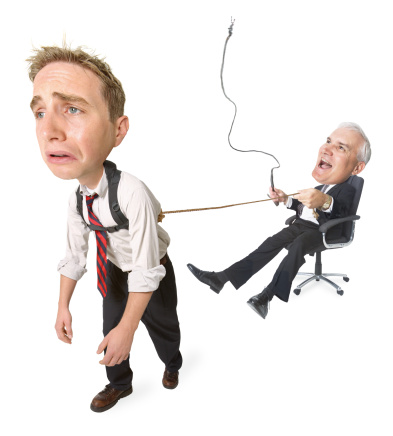 My wife Catherine is a fantastic manager. In her 30-plus years as a … well, boss at work, she has learned how to do it right. She’s pretty much guaranteed to be the best boss anyone who’s ever worked for her has ever had. Here is her list of 10 mistakes even good managers make:

1.  THINKING THAT MANAGING PEOPLE SHOULD BE EASY
Managing people is the most difficult thing any professional person ever does. It’s incomparably difficult. To take just two reasons why it’s easier to wrestle an elephant than to manage people: 1. Most people think they already know everything; and 2. Most people can’t stand being told what to do. And that’s just for starters. Then you also have all those people who refuse to know anything at all, and who can’t for a moment function without being told exactly what to do. The bottom line is that people are endlessly complex. What makes a manager’s job so extraordinarily difficult is that, in order to motivate and keep productive any given staff member, he or she has to tailor-make everything they do with and for that person in such a way that it perfectly fits that person’s entirely unique emotional, psychological, and intellectual needs. That is one tough sweater to keep on knitting. Learning to successfully manage people takes a lot of concentrated time and effort.

2.  DOING YOUR STAFF’S WORK FOR THEM
Sure, you can do your staff’s work better and faster than they can. That knowledge is what moved you into management. It’s also true that sometimes, if you want something done right, you have to do it  yourself. The problem is that if you keep doing work your staff should be doing, ten years down the road you’ll still be working like crazy, none of your staff will have learned how to do their job, and your company will have moved forward exactly none–and probably be worse off. That’s a failure. Supervise the work your staff does, but let them do it.

3.  TREATING YOUR STAFF UNFAIRLY
You can’t show favoritism among your staff members; you must treat everyone the same. Being human means you’re going to have more affection for some of your staff than you do for others. Being a manager means you cannot let that greater affection show. If you give in to the temptation to treat any of your employees in any way better than you do the others, the others are 100% guaranteed to notice and resent it—and soon. If you let Bob do below-average work because you feel sorry for him, Sam will be resentful, and also start slacking off. If you let Sally slide on some stuff because she makes you laugh, you’re going to start having a problem with Suzy. You like Tom, and so don’t mind if he takes a few extra minutes for lunch? Then don’t be surprised when everybody starts coming back from lunch late. In the end, you do no one a favor by treating anyone better than anyone else.

4.  IGNORING A BAD ATTITUDE
It’s a weird quirk of human nature that bad attitudes are more infectious than swine flu. A staff member who thrives on negativity always endeavors to get other staff members to see things as they do; “misery enjoys company” is as true as true gets. Negative employees never fail to complain. They highlight problems; they moan about inequities; they anticipate, cause, and rejoice in things going wrong. If left unchecked, they’ll soon have your whole staff agreeing that their job is awful, and their boss a jerk. One bad apple

5.  LETTING STAFF GET AWAY WITH BREAKING SMALL RULES
If you let your staff get away with breaking small rules, the message they’ll receive is that it’s also okay for them to break big rules. If you really don’t care if a particular rule is broken, then it’s probably not a good rule in the first place, and should be altered or dropped. But if it’s important enough to be a rule, it’s important enough for your staff to respect it.

6. TRYING TO BE BOTH A FRIEND AND A BOSS
Part of being a good boss is making sure that your staff understands that your relationship with them is based wholly upon their job performance—and that if they don’t perform their job well, you might one day have to fire them. Part of being a good friend is accepting and supporting your friends, even when they mess up. Friend and boss are two radically different roles. Do not confuse them. If you act like a friend toward someone who works for you, they will naturally assume that you will not fire them, even if they mess up. That assumption is very unfair, both to them and to your organization. That you cannot be a person’s boss and their friend is a tough lesson that every manager learns, sooner or later.

7.  ACCEPTING EXCUSES AS REASONS
If I am late to work one morning because of a really bad accident on the freeway, “heavy traffic” is the reason I am late. If, due to traffic, I am always late to work, then for me “heavy traffic” becomes an excuse. Similarly, if, while learning a new copier, I load paper into it incorrectly, the reason for my mistake is that I’m inexperienced with that copier. But if three months later I’m still incorrectly loading paper into that same copier, then whatever reason I might give for doing that can only be an excuse. A temporary personal problem is a reason; an unending series of personal problems becomes an excuse. As understanding and fair people, we accept it when a staff member has a reason for which, for a short while, they’re unable to do their job well. As understanding and fair people, we also sometimes get tricked into feeling sorry for people, and so accepting the excuses they use for continuing to do their job poorly. Learn to tell the difference between someone who is temporarily unable, and someone you’re merely enabling. The former you’re helping; the latter you’re not.

9.  BEING TOO BUSY TO SUPERVISE
Supervising is the most important job any manager has. Your staff is by far and away the most effective tool you have for succeeding at your goals. Because supervision is a long-term activity, it often takes a back seat to more immediately urgent concerns. But if you continue to leave your staff unsupervised, it’s a certainty that before long they themselves will become an urgent concern. Your staff must know that you’re involved in what they do, that you’re aware of their work and progress, that you care. (Not to mention how important it is that you’re aware of the quality of their work.) And physically being there to review and discuss their work with them is the only possible way to let them know that.

10.  NOT ADDRESSING PROBLEMS
A problem amongst your staff is like a noise from your car’s engine, or a cavity in your tooth. Sure, you can ignore it for awhile. But the longer you do, the worse it gets. It’s an unalterable truth of life that the sooner you address a problem, the easier it is to solve. As a manager, think of your staff as a garden, and problems within it as weeds. The sooner you get to them, the better.

January 12, 2010
How Will the Coming Legalization of Gay Marriage Affect Your Love For America?
Next Post

January 15, 2010 The Unkindest Prod of All
Recent Comments
20 Comments | Leave a Comment
"Right away you state atheists refuse to listen. I'll bet you don't listen either. Did ..."
JamieHaman Why atheists win arguments with Christians ..."
"Oh wow, so you did get in? Did you do all 9 months and graduate, ..."
Peter J. Markavage The Bible and sex addiction
"Hi Joseph - I was actually poking around the PLM site the other day and ..."
Peter J. Markavage The Bible and sex addiction
"Yeah PLM started my journey but more aftercare would be nice. But i actually know ..."
Joseph Chavez-Jackson The Bible and sex addiction
Browse Our Archives
get the latest from
John Shore
Sign up for our newsletter
POPULAR AT PATHEOS Progressive Christian
1